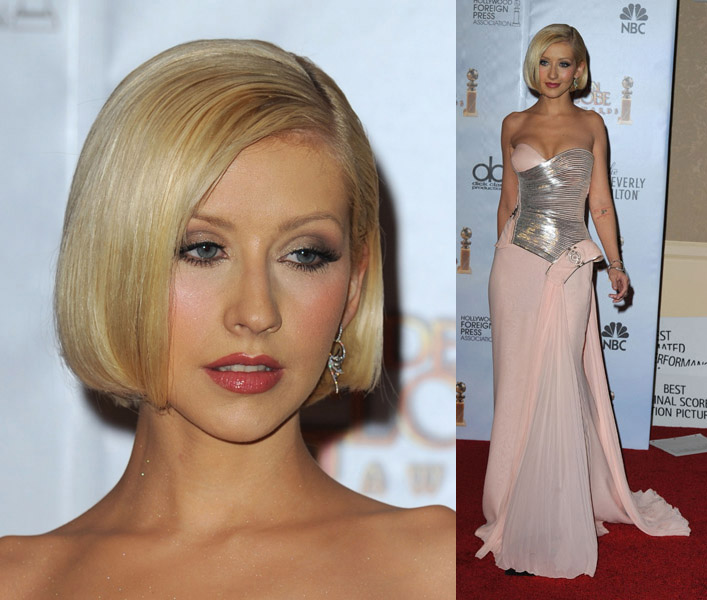 Christina at the Golden Globes 2010. Was voted best dressed, hair’s a little ropey though, if you wear a bob haircut, it should be sharply cut at the back and sides, it also looks greasy on the roots.

Christina Aguilera was born December 18, 1980 in Staten Island, NY; By the time she was five, Christina knew the songs from The Sound of Music and performed them at various parties. It wasn’t long before Christina was performing the National Anthem at different sporting events in her area. Christina first began performing in different talent shows in her area. At eight she appeared on the television series Star Search.

At ten she sang the National Anthem for the Pittsburgh Steelers and Penguins. Christina also went to an open audition for The Mickey Mouse Club. She didn’t make the cut, but two years later Disney invited her back. She got a part and became a Musketeer working with now-famous co-stars like Britney Spears, Justin Timberlake and JC Chasez (of *NSYNC ). Christina Aguilera sang, danced and performed her heart out during her two years on the show.

In 1998 when Christina returned to the states she auditioned to sing “Reflection,” a track which appears on her debut album, this was for for Disney’s animated film “Mulan”. It premiered in America in June 1998, Reflection then became a Top 15 US single.

Christina Aguilera has had a huge impact on the international music scene since 1999. A huge American story (three #1 smash hit singles, performing for the US President, taking home a Grammy for Best New Artist and more specifically, her UK profile. Her debut album “Christina Aguilera” has sold thousands, peaking at #14 in the UK album charts.

Christina is an eclectic, seasoned artist and every single from “Stripped”- is very different. From the jazz soul of “Walk Away” to the rock of “Fighter,” and the beautiful ballad “Cruz”, lastly the R&B of “Get Mine, Get Yours,” in fact no two tracks sound the same. Stripped was recorded over an eighteen-month period, with Christina being totally in control, Stripped slowly but surely took shape.

Christina followed up Stripped with Back to Basics (2006), which was released to positive critical acclaim and included elements of soul, jazz, and also blues music. Christina’s fourth studio album Bionic (2010), which incorporated aspects of R&B, electro pop, and synthpop, was met with mixed reviews and poor sales.

Without a doubt, pop sensation Christina Aguilera has one of the most stunning voices in music today. With two smash albums and a slew of hit singles to her credit, Aguilera is one of the most popular and revered recording artists of her generation. Her jaw-dropping whistle-register vocals have commanded the attention of casual listeners and music legends alike. I think it’s a certainty that Christina Aguilera will be around for decades to come.

Christina Aguilera hairstyles
We all know that Christina Aguilera is a beautiful lady but after close observation at some of her past styles (going back to 2002) I was quite surprised that the majority didn’t suit her that well, I’m not saying that she hasn’t worn any great hair styles, I was just struggling to come up with a few stunning looks.

Take a look at some of her past styles. 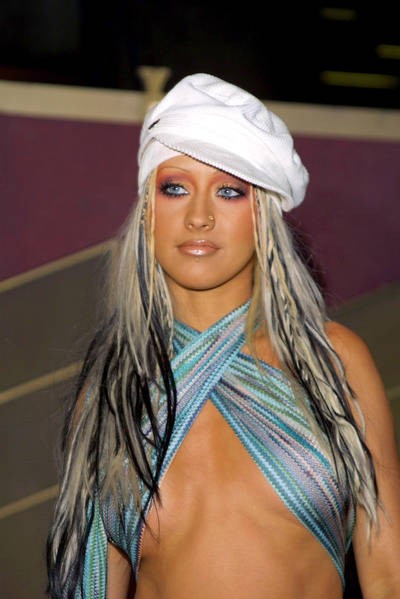 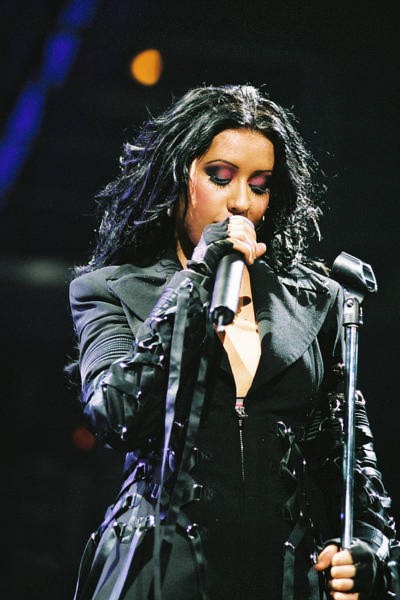 Christina Aguilera in Concert at The United Centre – July 2003. Not a good look. 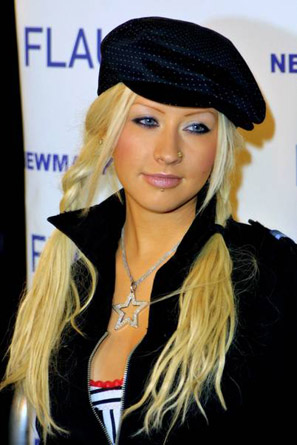 Arclight Cineramadome Los Angeles March 2003. Back to blonde, kind of cute, do you not think she looks the spitting image of Paris Hilton! OK Christina is actually better looking but this could be her twin.

MTV Music Awards 2003. Christina loves swopping between blonde and black. Quite like her hair piled up like that, it’s cute, what spoils it is her dress 🙁

46th Annual GRAMMY Awards BMG – Arrivals February 2004 Hollywood CA. Christina colour’s it black again, I prefer her as a blonde also the shape of this cut is very unflattering. 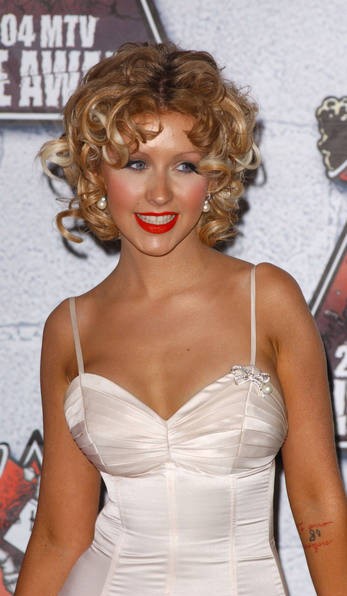 MTV Movie Awards, 2004 – Press Room Sony Pictures Studios. Christina chooses a variety of different blondes, I prefer the colour to the cut, there should be a few more longer layers in there, (especially at the top) that way it makes the curl more sophisticated, also the centre parting is not a good look, well that’s my option anyway. 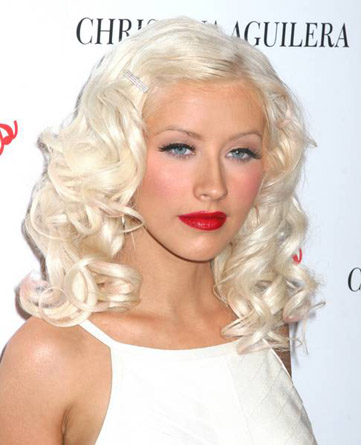 Marquee Record Release Party For Back To Basics August 2006. This is the nicest look so far, I especially like the platinum ice blonde colour.

Although there was one look above (the platinum ice blonde) that I quite liked, below are my favourite three looks. 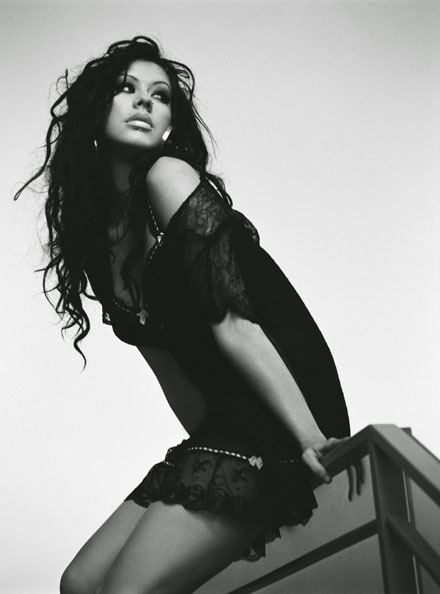 This was photographed for RCA records in 2007. Although I mentioned above that I didn’t like her hair black, this photo is the exception. 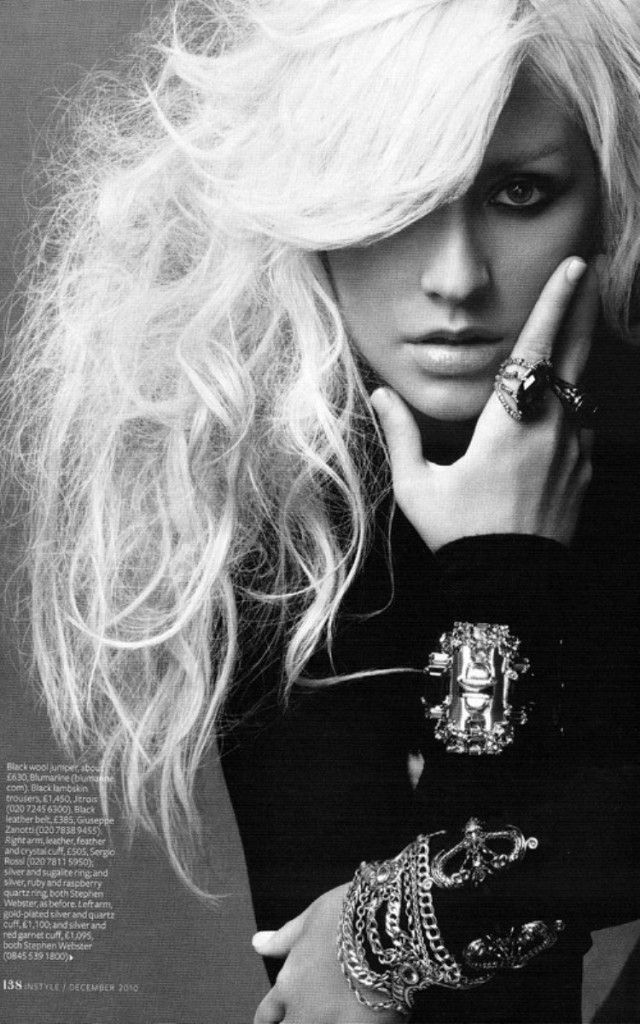 This was photographed for InStyle Magazine in 2010. I really like this messy look; it’s trendy and suits her so well. The colour is also spot on 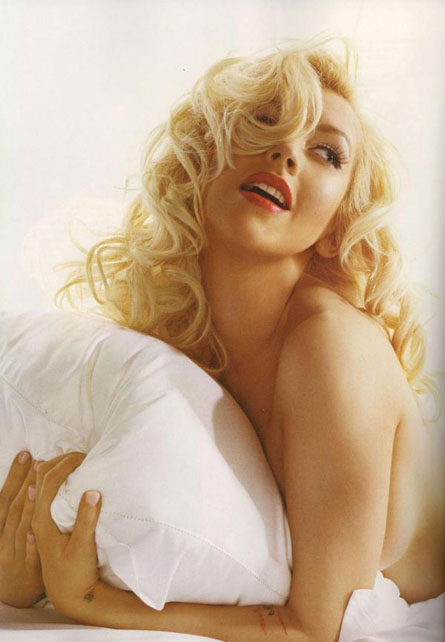 This is my favorite Christina Aguilera hairstyle, it’s very sophisticated and one of the best Marylyn Monroe copies I have seen.

It seems like Christina’s best hairstyles are photographed for either record labels or magazine shoots, I think she should use these hairdressers for all her red carpet appearances and that way her hair will always look stunning and glamorous.

How to achieve this style of Christina Aguilera, seen at Sony BMG in January 2008
For this style you would need a long fringe to around your mouth and a few shorter pieces cut at the sides. Your hair can be straight, wavy or curly but needs to be at least shoulder length.