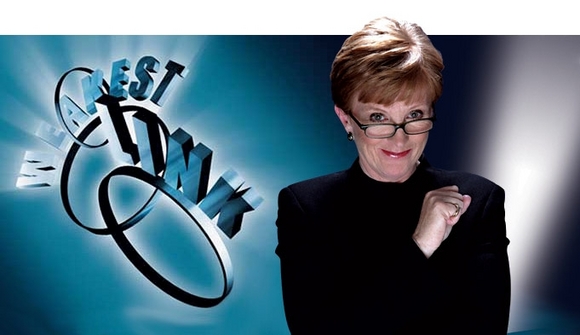 Three weeks ago I received a phone call from the BBC and they asked if I was interested in being interviewed for the weakest link TV show, this would be for a hairdressing special, at that point many thoughts started to swim around that little head of mine, for instance, will I survive the Anne attack? Will I be able to answer the questions correct? Is it worth going all the way to Scotland? (that’s if they chose me of course), I thought I may as well give it a go as it’s all publicity after all, off I went to Shepherds bush (BBC centre).

The interview was set up in a room with one camera and a producer, she fired questions at me in a similar manor to how Ann Robinson would, it was strangely quite enjoyable, in fact after the interview I felt quite good, even though the producer explained that Ann would be even more ferocious than that, oh well!!!

Now the fun begins, I had to answer 25 questions in an exam style situation and I had 3 minutes to finish, my mind just raced around the room, It really did feel that I was back at school and I hated school exams. The problem with a majority of the weakest link questions is they drum roll the beginning by making it sound really complicated then the actual question is at the end, it took me around two minutes to figure that out, I then only had one minute to answer all 25 questions, I managed to answer ten, basically I blew it, or did I!! The producer even commented and said “is that all you’ve answered” and shamefully it was.

Three weeks later I received a phone call from the weakest link, they told me that I had been chosen for the show, when she told me I was a little shocked considering the amount of correct answers I gave (or should I say incorrect answers) I  believe it had to be down to my sparkling personality lol.

I fly to Scotland on the 23rd March 2010 and the filming takes place the next day. I bet you know what I’ll be doing for the next three weeks! you guessed it, swotting up on my general knowledge.

Let’s hope I survive the first round of questions! or at least one round of banter with Ann Robinson:)