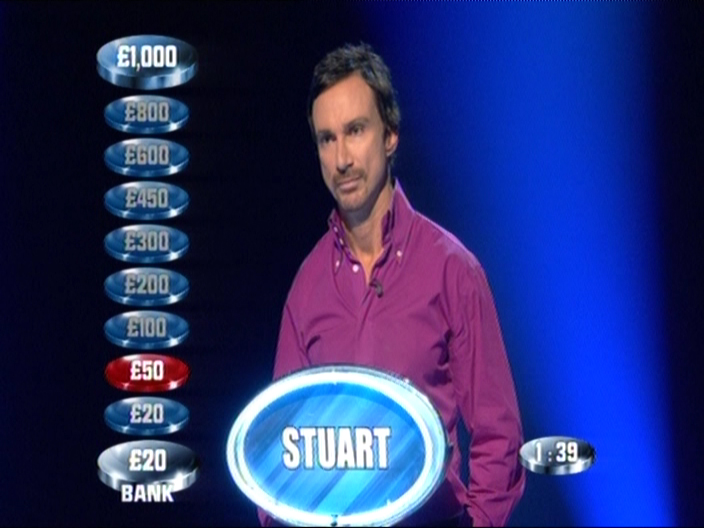 On March 23rd 2010 I flew to Scotland to take part in a special 10th year celebration of the Weakest Link. There were five special shows in one week, the hairdressing special was aired on the 11th August 2010 and was the third to be shown out of the five.

This has to be the most scariest TV moment to date, I’ve worked on many TV shows in the past and loved every minute of it, never nervous just excited but, there is something so different about the Weakest Link, firstly  you obviously need to answer as many questions correct as possible, then you have the competition of the other hairdressers, (you just don’t won’t your fellow hairdressers to beat you)  finally  you have the Ann attack, when you’re on the firing line can feel quite intimidating. Don’t get me wrong everyone that appears on that show is fully aware of Ann and how she can verbally tear you apart, the thing is, everyone thinks that they can protect themselves and handle it but when you’re in the studio standing up behind your podium and seeing all the TV cameras etc, reality kicks in and you think, why oh why but at that point it’s too late and the only way now is to soldier on, so let the battle commence!!!!

I’ll talk you through the day. I was flown to Scotland the evening  before the recording,  I used this time to read up on as much general knowledge as possible, I realize that there are millions of possible questions that Ann can ask but for me it was more an exercise of training my brain, this definitely gave me more confidence. I acquired these general knowledge questions  on the internet and printed up about 50 sheets of information, on history, geography and wildlife etc and just studied like crazy for a month before. The night before the show I stopped revising around 1am (was exhausted from studying) and fell asleep around 2am.

The next morning all nine of us (hairdressers) met outside the front of the hotel and was then picked up by coach, we were taken to the BBC studios. Although most of the hairdressers had a title, for example, “The Scottish hairdressing champion”, “World champion” etc, this was the first time I had met these guys, my title for the show was “The world’s most expensive hairdresser” and strangely enough there was only one of me there.

Once we arrived at the studios, we started to bond with each other almost straight away and everyone seemed to get on really well, what also helped was the fact that everyone was really nervous and probably we all made the extra effort to get on, the point is we all did. Then one at a time we were all interviewed, which lasted about 20 minutes each, at the interview they checked that our biogs were correct and if we had anything else to add. I personally think they were also checking to see that we had not gone crazy since the last time they saw us, in a way, psychoanalyzing us, which is fair enough considering  we were just about to be filmed in front of a potential 3 million audience.

When the interviews were finished we all had something to eat, next we got dressed in our favorite clothes we brought with and then the rehearsals began. We rehearsed for about two hours, the producers also gave us advice on how to speak to Ann, for example, not to get angry with her as that will make you come across stupid on TV, try to look like we were enjoying ourselves even if we weren’t, no swearing etc,  At 3pm we were escorted into the studio and we were told to stand behind our podiums. There was a little more practicing to do, for example, how ever easy this sounded were all asked to lift our score boards up at the same time, which sadly took us about 10 minutes of practice, there’s always one that get’s it wrong, wasn’t  me honestly!!

The next part was really weird, (just to let you know, we were not introduced to Ann earlier, this was done on purpose to build up the tension, like we needed that, lol) Ann walks in and turned to one of us and just stared, there was absolute silence, this made all of us fairly nervous, we all watched helplessly as Ann started to study us and then write her observations down, she spent about ten minutes staring and writing, she looked at me twice, that freaked me out a little, thinking that she was going to have a field day with me!!

Ann then walked away, one of the producers said out loud, “we are now doing this for real”  for me this was the most nerve-racking bit, the lights dimmed down, the theme music came on really loud, Ann walks in the room for the second time and started the show. It was really surreal, the whole day we were preparing for this and the month prior revising my general knowledge, all came down to this exact moment in time. I then gasped and thought get to grips sunshine, funny enough I then started to feel a whole lot better, the poor girl next to me Charley was actually shaking but there was nothing I could do to help, it was too late as the show was now under way.

Ann started in alphabetical order, the first to be asked a question was Charley, I was the 7th person, so far including myself we all answered our questions correct, then Tracy was next and got hers wrong, without sounding horrible, that must have made everyone feel good,  nobody wanted to be the first one to get voted off. The second round of questions came and again Tracy got it wrong. I’ll give you one guess who was voted off first!! When Tracy was told she was the weakest link and walked off, everyone felt relieved,  including me.

One by one people were voted off but I was still in the game, yippee.  Most of the hairdressers including me were verbally attacked by Ann, which was very funny, I even laughed when she attacked me, seriously it was very funny. At one stage Ann said to lovely Charley, “Charley, your blonde and a hairdresser, does that make you thick love” well I felt so sorry for Charley as she was such a nice girl, but it didn’t help when Ann asked her the next question, which I have to share with you, Ann said “what’s seen in a children’s playground, it’s a long piece of wood where one child sits on one end and another child on the other end, when Charley went quiet I thought to myself, please answer this question please but she had a brain freeze, which I suppose is not that uncommon on this show, poor thing.

I must admit there was one question I was asked and because it was so simple I thought there had to be a catch so I asked Ann to repeat it, this is what I was asked” what whole number falls between 8 and 10″ and I asked Ann to repeat that, hahaha, I then laughed and of course said 9. There was no catch but your brain can play funny tricks on you, like doubting if the number 9 falls after 8, seriously you have to go on this show to see what I mean.

Well apart from almost slipping up on number 9 and never living it down, I answered 14 questions correct out of 15, not bad I suppose!

I’ll tell you one more thing before you watch the show, two of the other hairdressers ganged up on me as I was the strongest link three times, how dare they, haha.