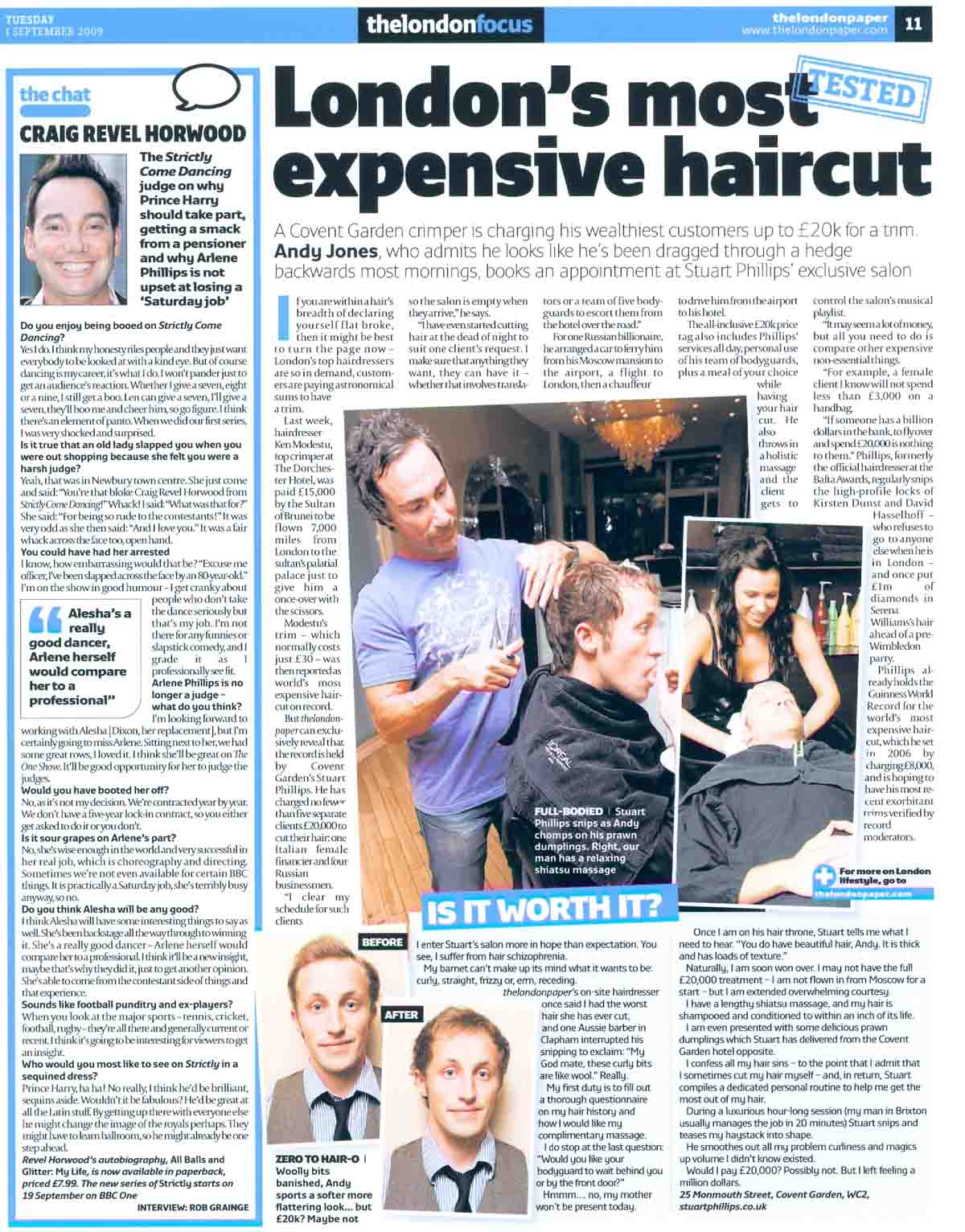 One would have thought that coming up with a PR idea about a £20,000 haircut might have made a little ripple or none at all, (being that it’s such a crazy idea) but what I didn’t expect was the huge response that I got worldwide.
The last newspaper to cover my story in the UK was the London Paper (which was last week) I received a full page, I have also received a full page in the Mirror which you saw last week in my blog, half a page in the Telegraph, A column in the Mail and the same in the Metro.

My story has continued around the globe with the New York Daily News, the Irish Times and a majority of other newspapers from Japan, Spain, France, Lithuania, and Croatia, I’m sure there’s been others, it’s just hard to track them all down.
I was also approached by a German TV station called Pro Sibean, which is our version of Channel 4, They came into the salon last week and filmed one of my 20G haircuts, it was really cool as they started off in the hotel room with my client and filmed her getting ready then I met her with the film crew in my salon, the filming went on for 10 hours, then In the evening I invited 10 of my girlfriends to meet me in the salon because the production crew wanted to film me socialising with my client and lots of pretty girls, (lucky that my client was willing) It looked very cool as I was sitting in the middle of this huge couch with 5 girls either side of me, “oh I love my job”
Last week I received an email from a Croatian TV station called HRT, they explained to me that there are only two TV stations in Croatia and they owned one of them, they continued to explain that Stuart Philips is becoming a national celebrity in Croatia as I’ve been seen in there newspapers and on TV being spoken about, I’ll give you one guess about what, you got it “the £20G hair cut” and they wanted to know if they could come to my salon and film me, they explained that the people of Croatia will get to know the real me, how nuts is that, I originally thought that it was a mate of mine winding me up, but it wasn’t, they came in on the 4th September and interviewed me, (I’m so going to Croatia for my next holiday, being a national celeb and all that, hehe)
It took me a couple of days to come down from all this excitement, then when everything was back to normality I received a phone call from CNN International, they heard about my story and they want to film a short documentary, “wow” this sort of publicity is priceless as it gets transmitted to around 250 countries which I was told included 20 million hotels, since I’ve been given the go ahead I’ve been busy making a story board for the documentary, I’ve had so many ideas for CNN, my favourite so far is finding a couple of girl bands and solo artist’s to sing in my salon to my VIP client, the reason I’m going in that direction is because my client emphasised that she wants’ a lot of rock/pop music being played, so I thought why don’t I bring the music to her LIVE, I’ve already started interviewing different rock/pop bands.

After the filming is finished I will reveal all, (can’t wait) better get back to that story board!
Bye for now!!