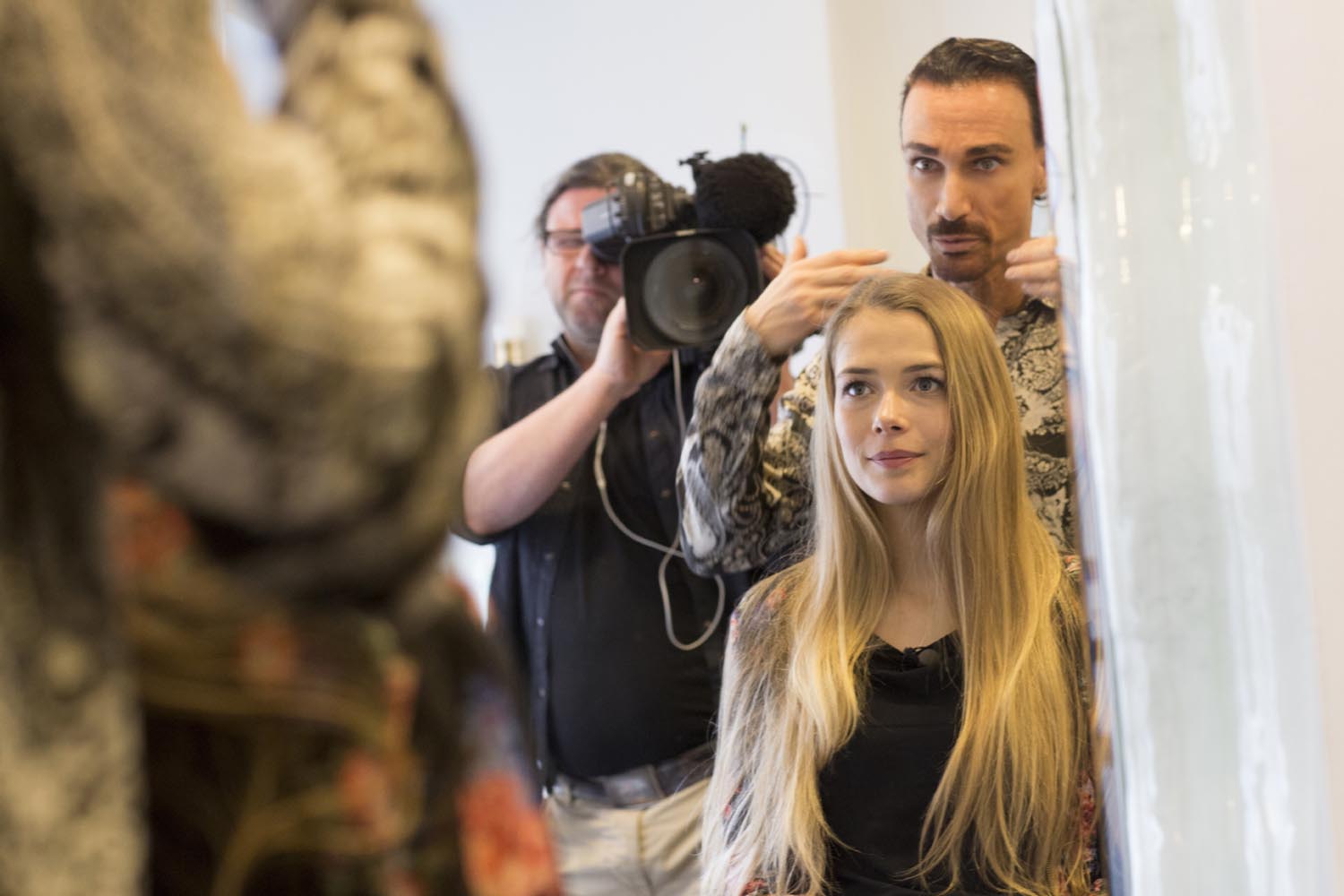 Explaining to Karlotta that her hair is too long for her face shape and also looking fairly damaged, therefore the shape and balance of the haircut could be improved! 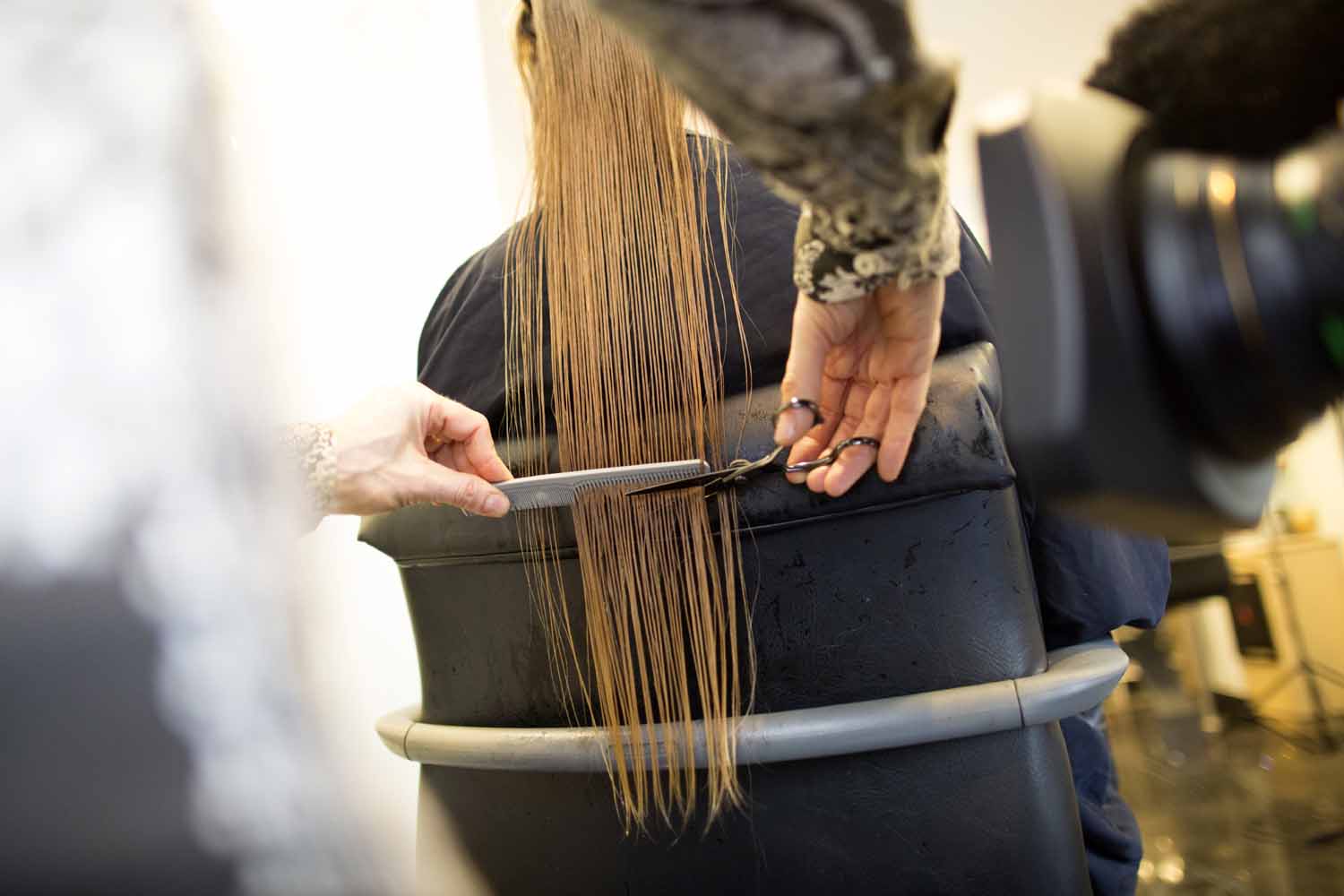 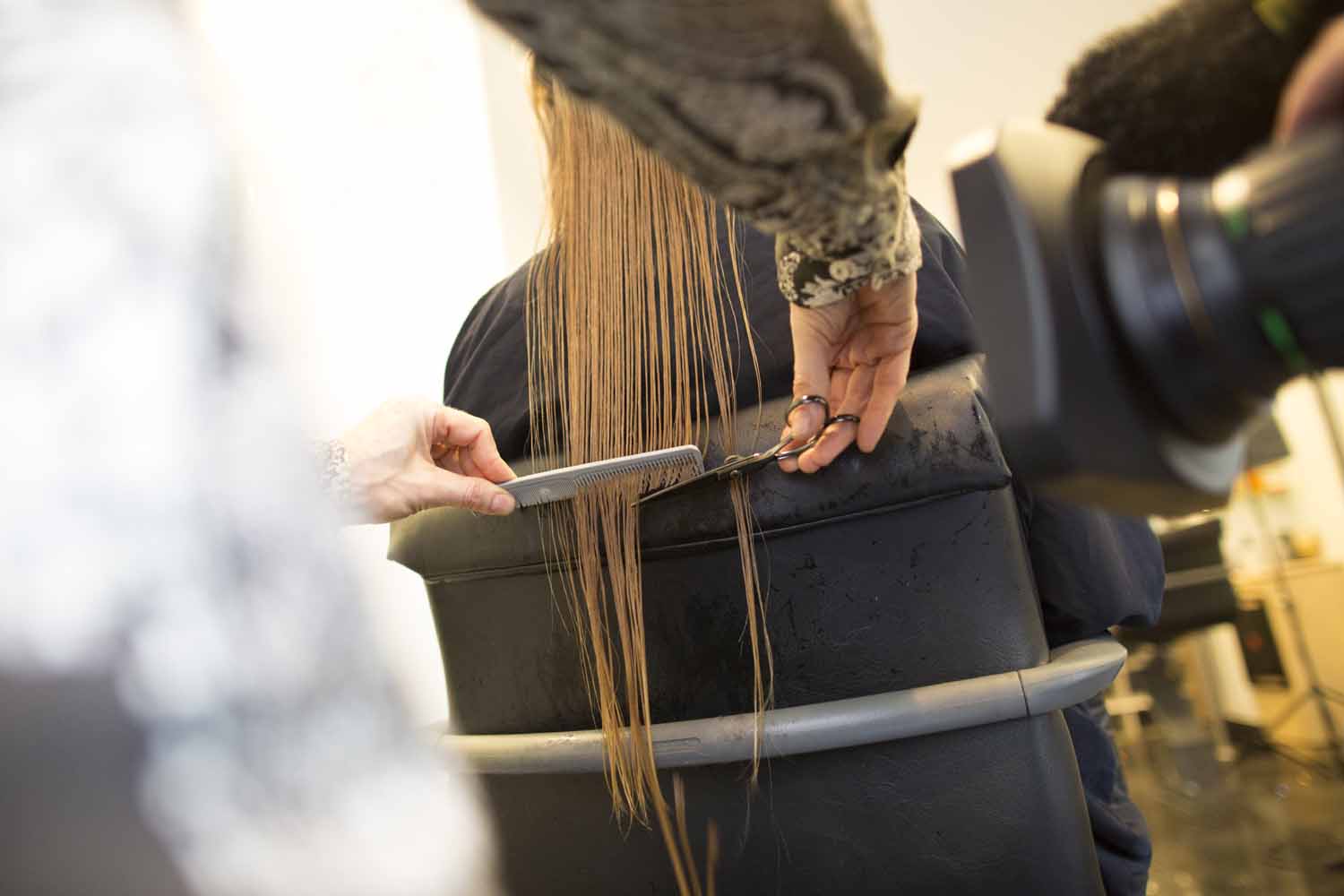 Too late and no turning back! 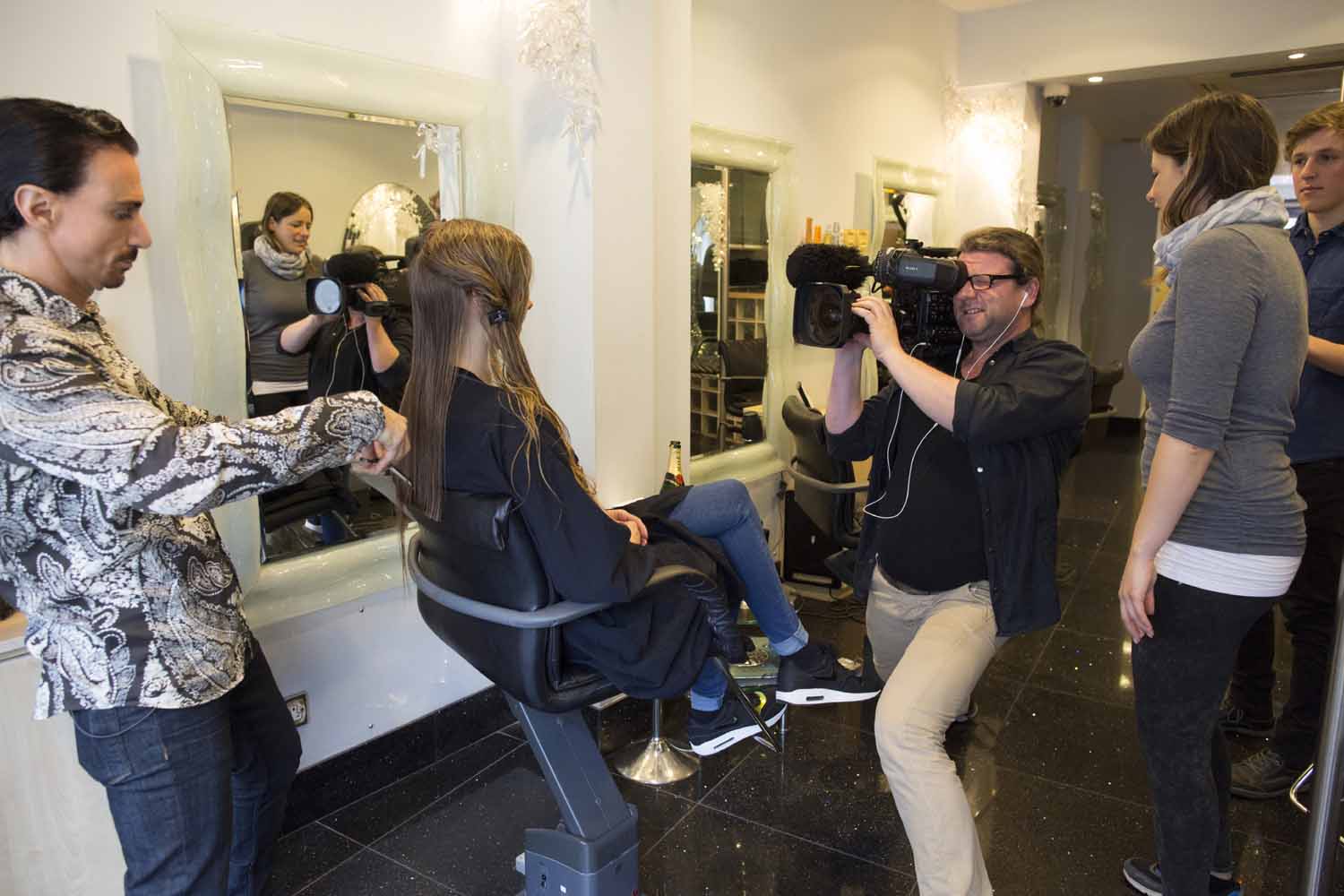 The first five inches have been cut and the camera crew are in full swing. 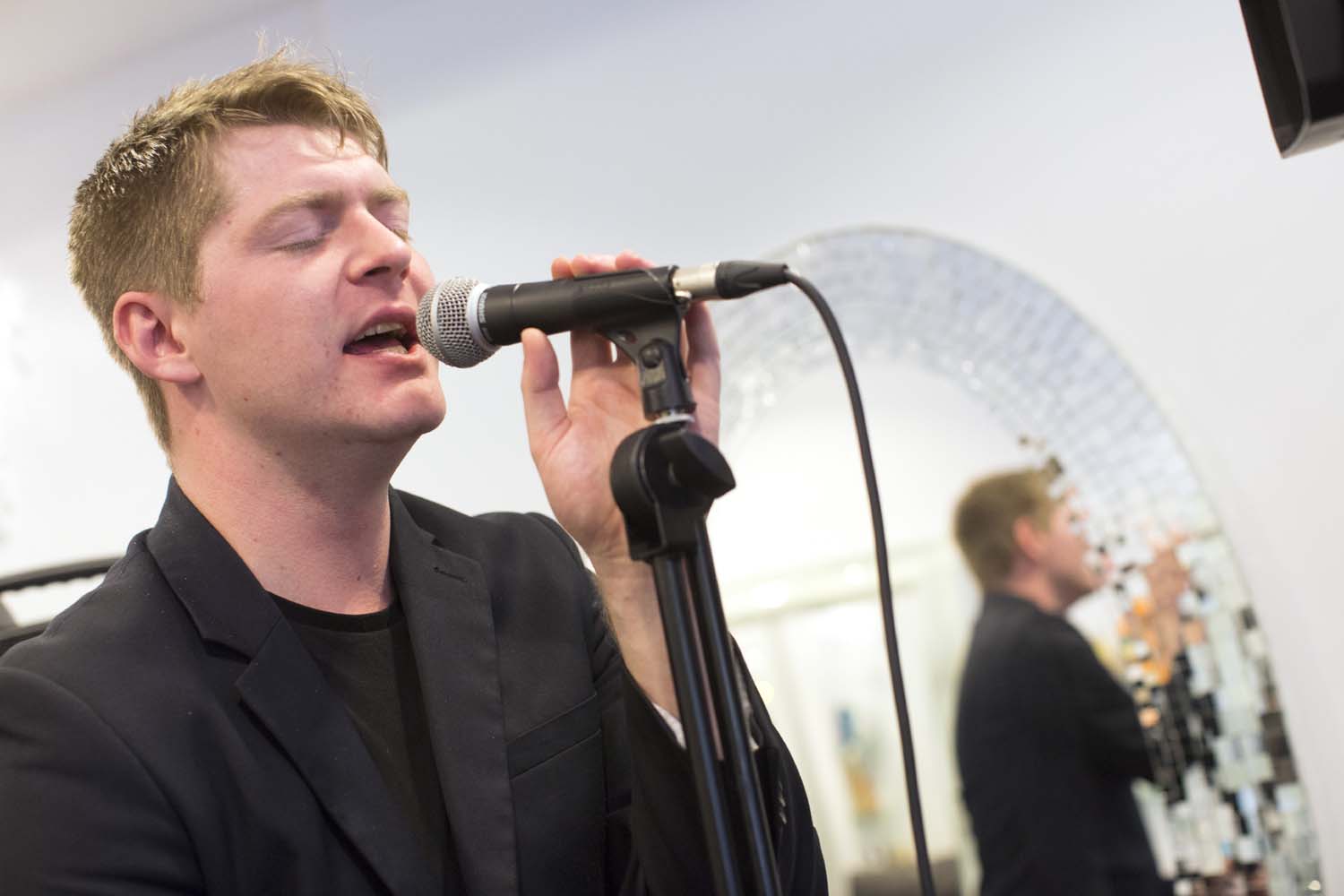 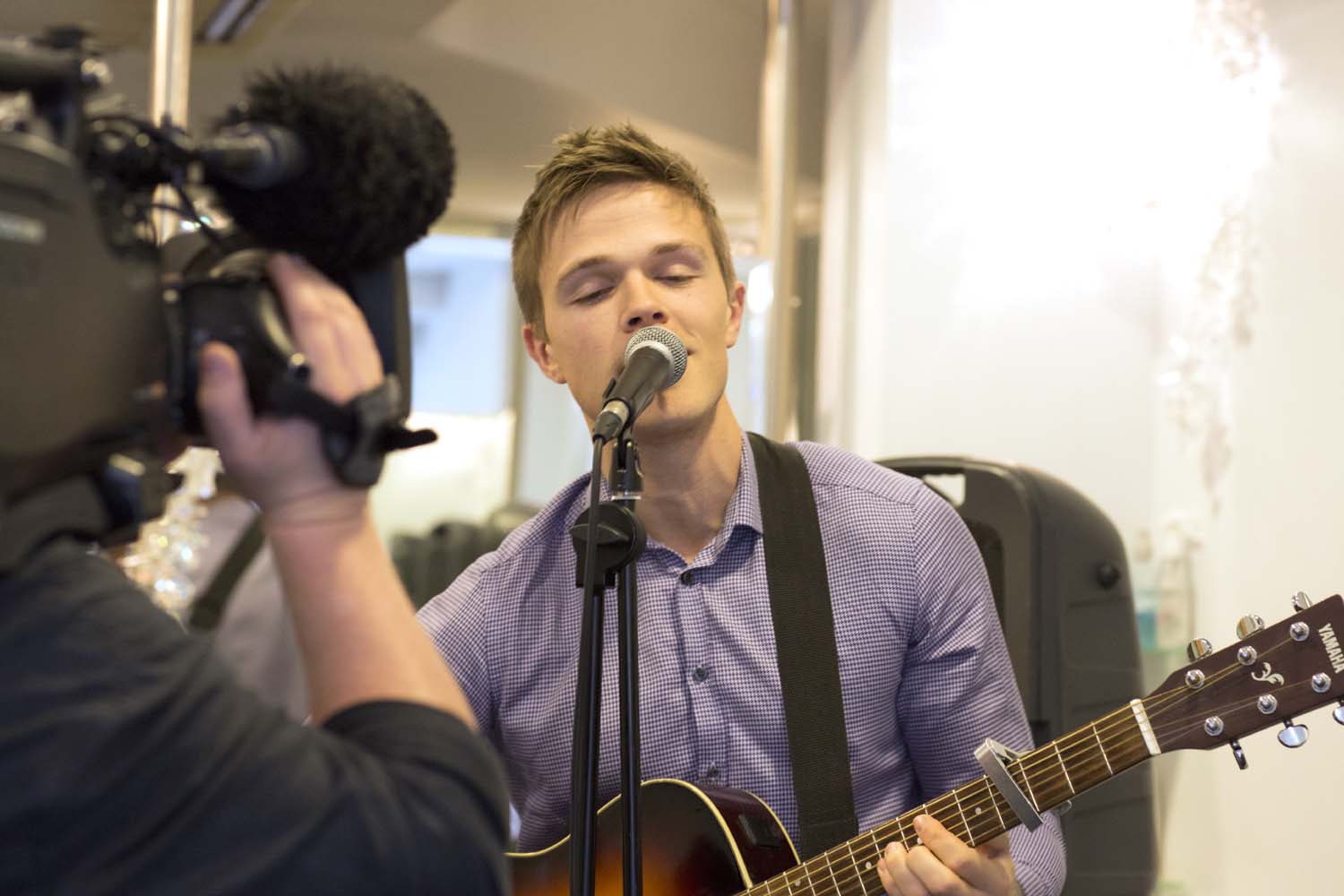 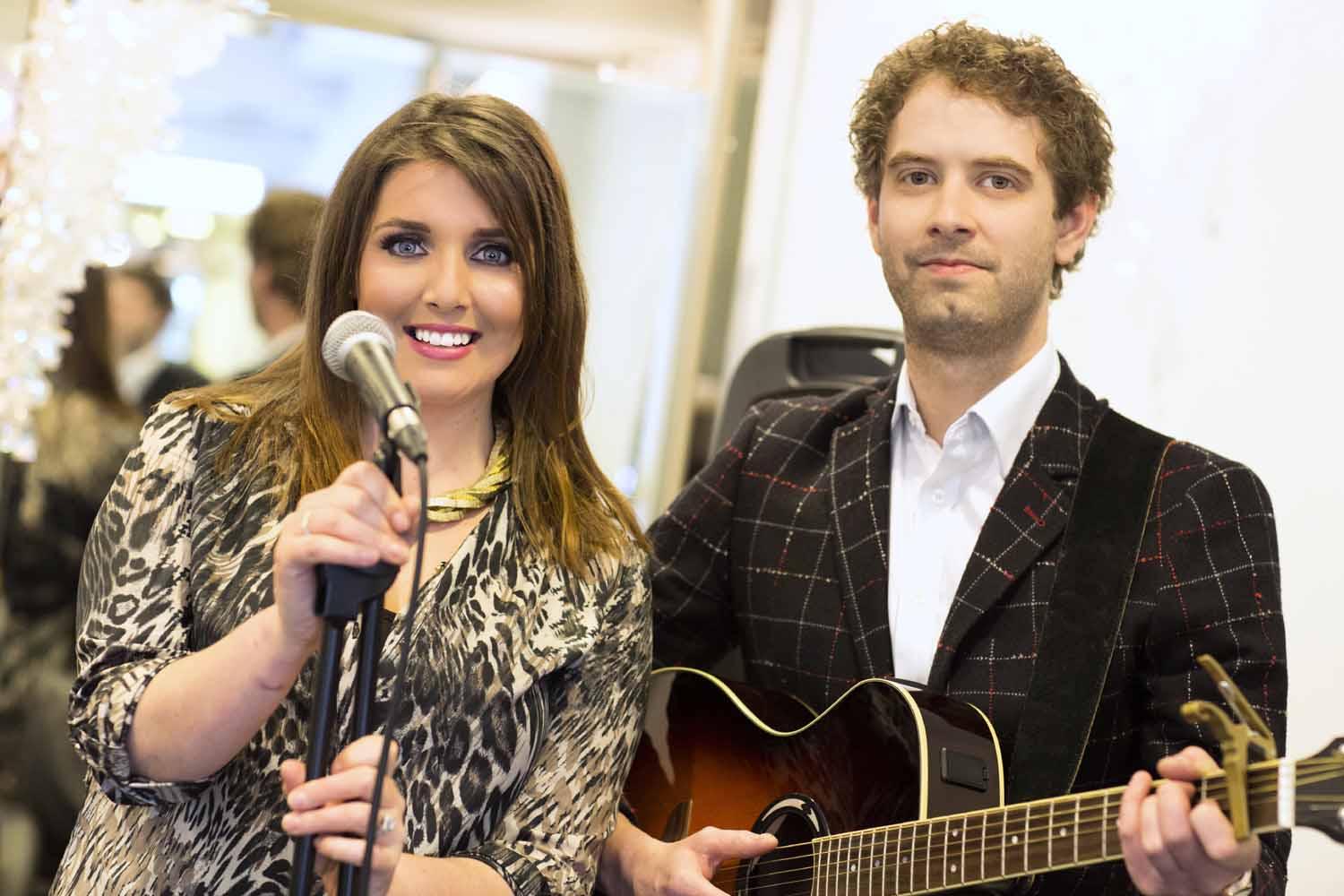 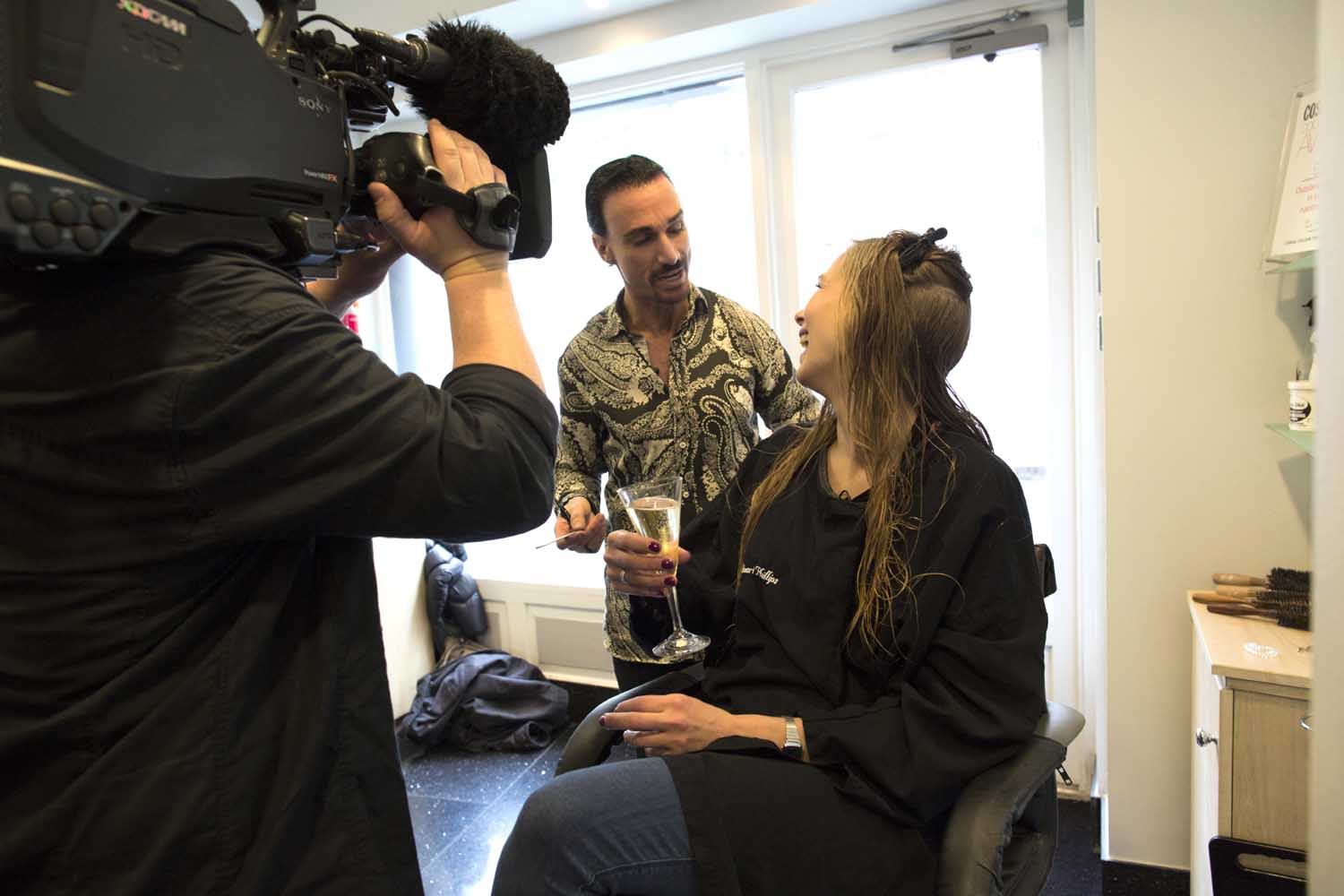 I can’t exactly remember if I was trying to sing to Karlotta while she was sipping her champagne? Maybe after hearing all those amazing artists I thought I’d give it a go! 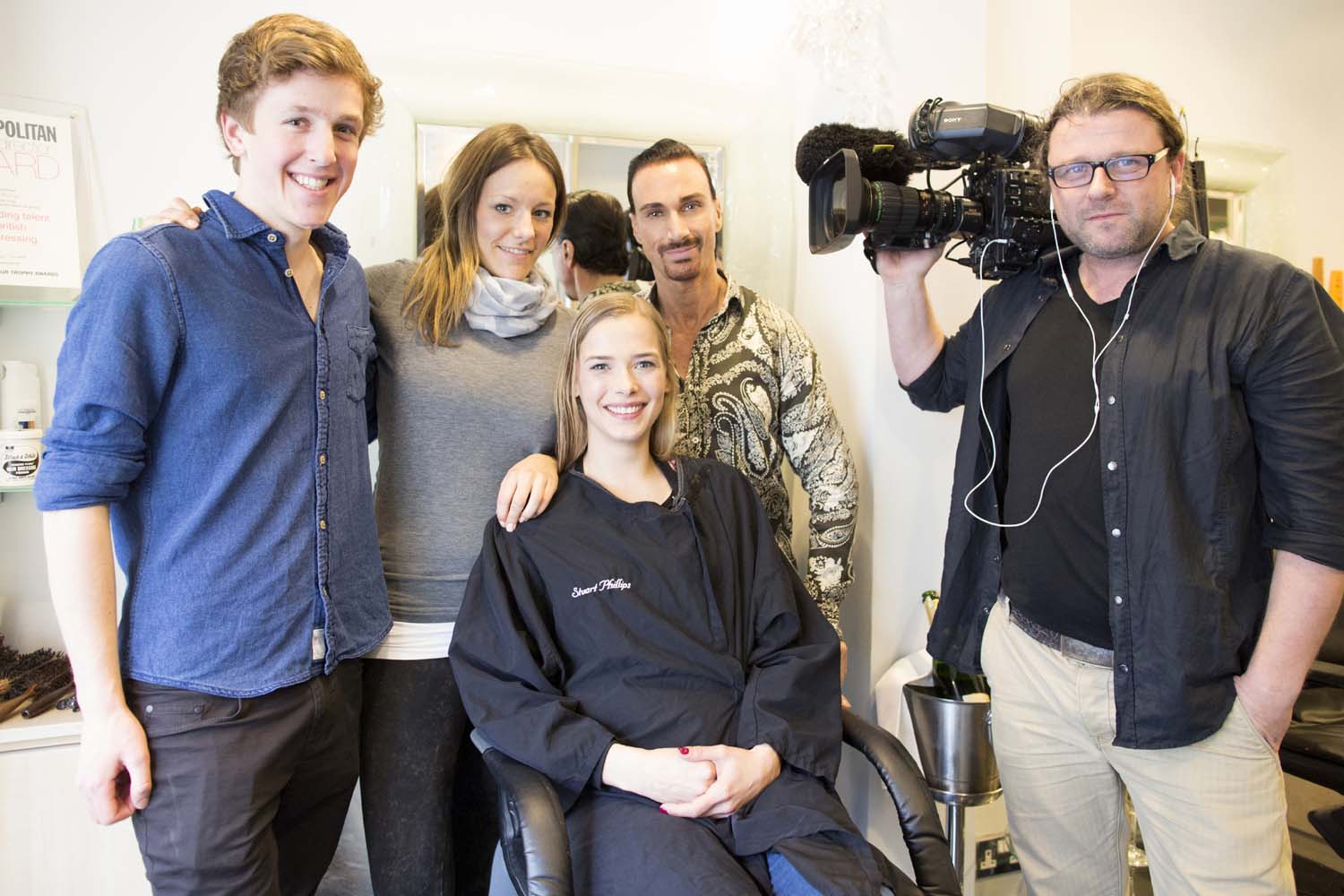 Galileo TV crew and me. 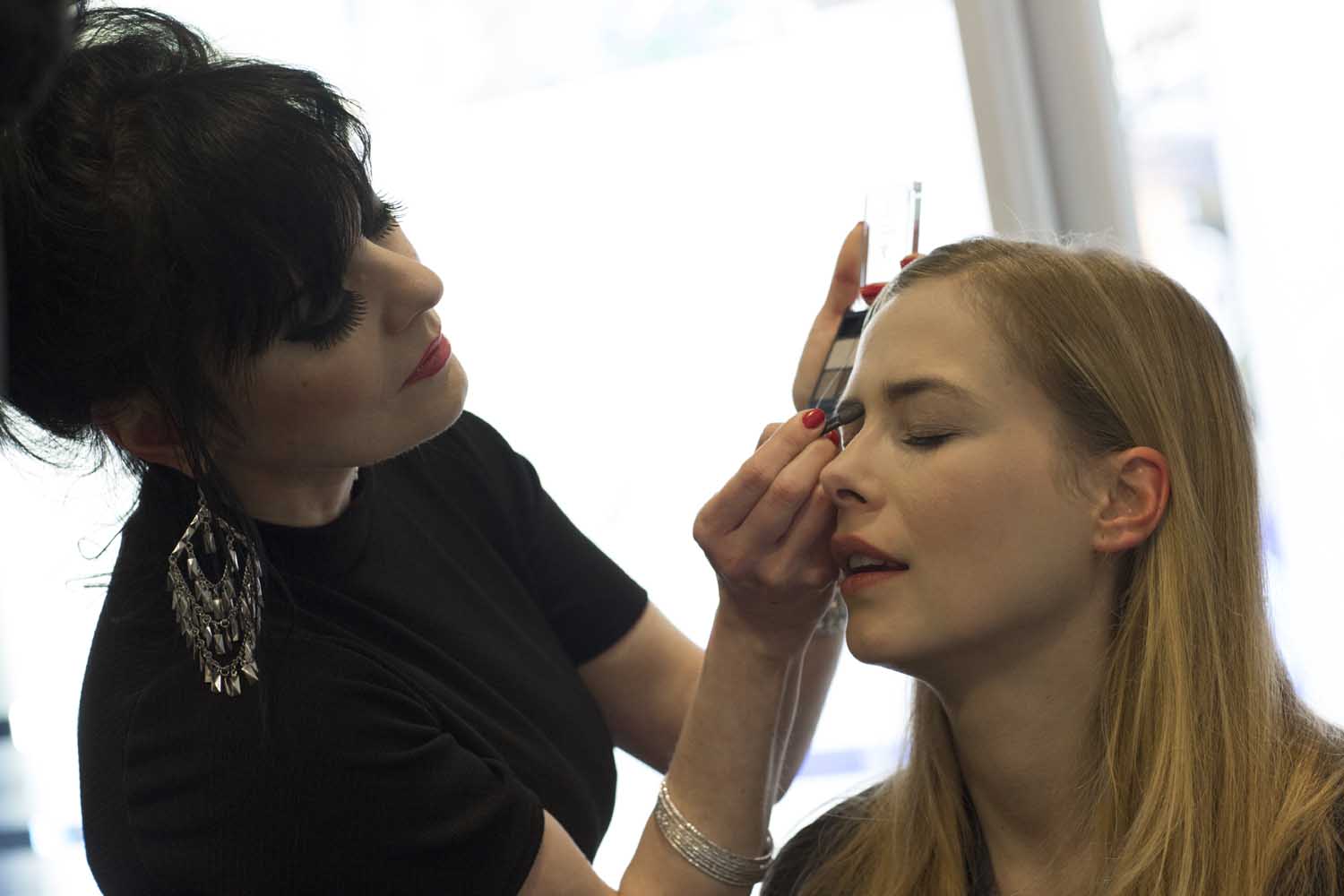 Angel concentrating on making the make-up look as natural as possible. 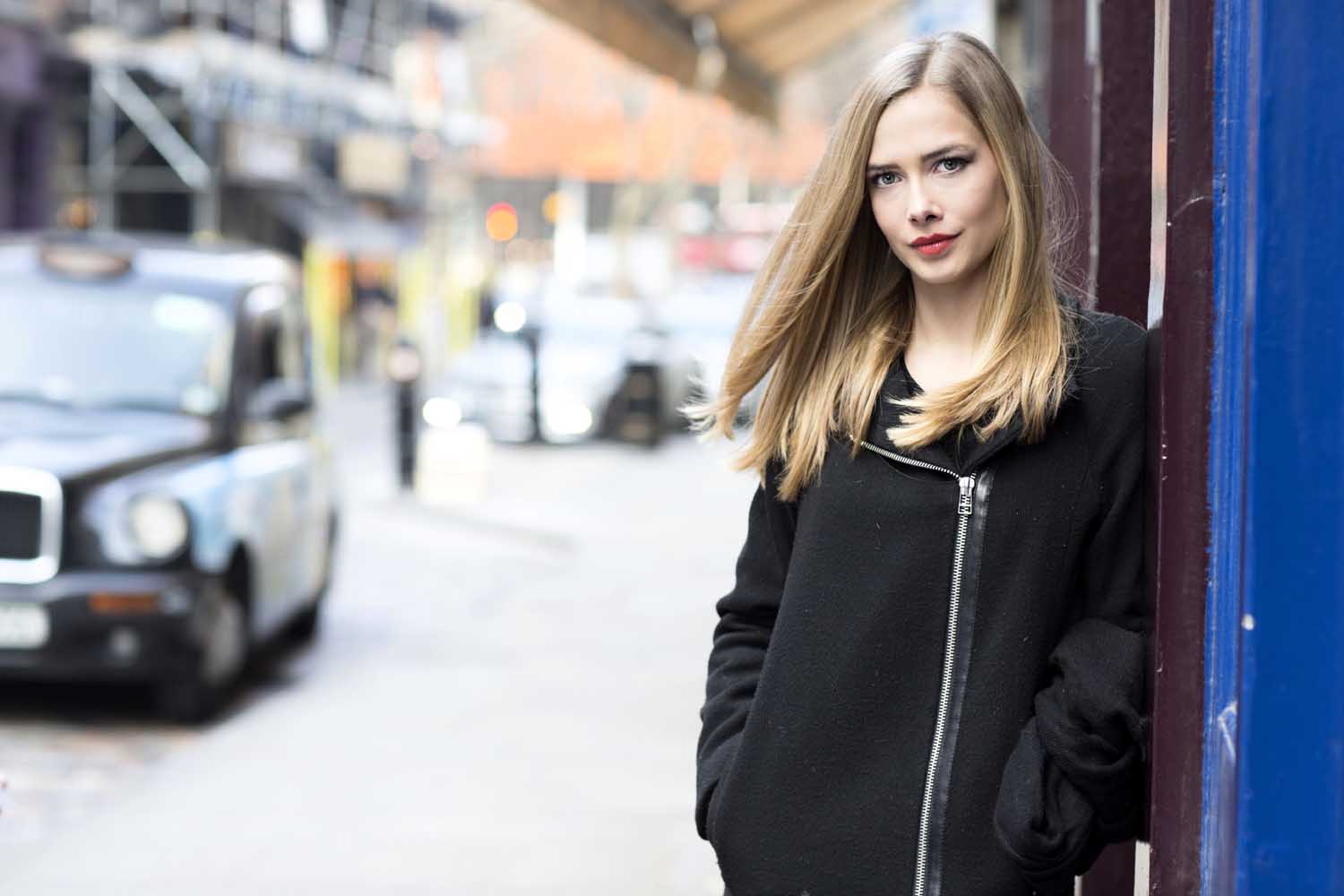 Earlier in the month I received a call from one of Germany’s biggest TV stations.

The producers of the show wanted to film one of my VIP hair packages, experiencing the lifestyle of the super rich!

The program is called “Galileo – das Wissensmagazin” on Pro 7 TV.  It is a prime-time magazine show with a viewing audience of around 4 million. The show will be seen in Germany, Austria and Switzerland.

I explained that my VIP clients would not want to be filmed, the editor then asked if the host of the show (Karlotta Arnold) could experience the VIP service whilst being filmed and then report back, I agreed to this.

The next part was quite interesting, I had to listen to many musicians choosing 3 male and 3 female artists, along with a few bands, then I would give my choice to the producers, who would then choose the final three.

This was extremely difficult because there were so many talented artists! I eventually picked the 9 and sent their music to the producers.

The chosen 3 were; Dan Olsen, Tom Turner and Hollie Barrie from “The Voice!”

My next task was to sort out a very good photographer that didn’t mind being filmed whilst he snapped away, his name was Massimo Filippi. Massimo would be Karlotta’s photographer for the day. Then I had to organize a limousine, a 5 star London hotel, personal assistant, etc!

On the evening of the 17th March (the night before the filming) I had to wait for the PA system to arrive, it arrived on time. Although the artists would be able to work the PA, I decided to learn how to use it myself, so the guy that delivered the PA system gave me a quick crash course, thought that couldn’t hurt!!

On the 18th of March the filming started at the Me Hotel in London, My VIP would be filmed walking out of the hotel into a limousine, then driven to the Stuart Phillips salon in Covent Garden.

As my salon is very long (around a 100 feet) I commandeered half of it for my VIP, whilst the rest of my stylists cut hair at the opposite end of the salon.

Soon after Karlotta arrived with the camera crew, I started my full lifestyle hair consultation. This consisted of a 15 minute discussion, regarding Karlotta’s face shape, bone structure, body type, etc! From this I determine the perfect hairstyle for her.

A few minutes into my consultation I realized that Karlotta didn’t want much hair cut, so I convinced her to cut off at least 5 inches. This was because her hair was in pretty bad condition and also desperately needing a good shape. Karlotta’s face was also quite small, so the length of her hair just made it look even smaller. A shorter style would bring her features out even more, although if cut too short it would tend to elongate her neck. After the consultation Karlotta agreed on the length.

She was then whisked away to have a wonderful head massage laying back in comfort on one of our state-of -the-art shampoo beds.

Karlotta was then entertained by my first artist Tom Turner. Tom’s genre of music was from the 80’s and his first song was called “Vanity” followed by “Winter in Berlin”. Tom performed this to his backing track, his performance was as good live as when I first heard him on YouTube. The producers loved his music too, Thank you Tom and well done!

The second performer was a guy called Dan Olsen, I also loved Dan’s voice and the great thing about his music was his style was so different to Tom yet just as good!

Dan sung two songs with his guitar. The first was called “Hold You Tonight”, the second was called “In the Morning I’ll be Sober” Dan could really hit the high notes, another great performance! Thanks Dan!

While the entertainment continued, Angel was making sure that Karlotta always had Champagne in her glass, then minutes later came back with this amazing tea platter from the Covent Garden hotel.

The third and final performer was no other than Hollie Barrie from “The Voice” TV show. She was singing with her guitarist Justin Halley. Her first song was called “I’m not ready” the second was called “Ice Cream” Yet again another completely different genre of music and what a great voice she had! Thank you Hollie and Justin.

Angel was up next, not only was she looking after my VIP but was also a professional make-up artist. As Karlotta was naturally pretty, Angel decided to keep the make-up very minimal, wise choice Angel and thank you, you did a great job!

I then showed Karlotta the back and as I did she gave me a BIG smile.

I must admit it wasn’t a life changing look as I was limited to how much I could cut, especially as she’s a TV presenter/actress and needed to keep it fairly long, all the same she loved her new cut!

The filming continued whilst we were saying our goodbyes, followed by Massimo taking some more snaps of Karlotta outside.

The producers have since informed me that the show will be aired in about three weeks. Once aired I will attach the link to this blog!

I would like to give a BIG SHOUT OUT to all the talented artists that sent me the links to their music. Sorry that I couldn’t use every one of you! Thank you to Zak Black, Darja Schabad, James Stephen, Ciaran James, Eve-Yasmine Saoud-Easton, Dan Moub, Pip Faye Langhorne, Lara Smiles, Emily Wilson and Stephen Langstaff, that’s just to name a few!