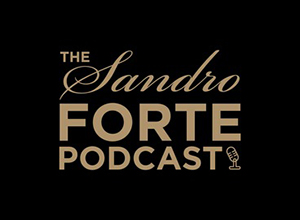 I was just interviewed on a live radio show and podcast called the Sandro Forte Hour.

The radio presenter Sandro was a really nice guy to converse. His show pulls in over 140k listeners a month, so I felt privileged to be able to discuss my career and all things hair with him to such an audience.

Once I was on air I spoke live for around 30 minutes, about the various interesting things that I have done with hair and also the fun times I’ve had with my salon’s art team too at various red carpet events. Part of this fun included placing a million pounds worth of diamonds into the hair of Serena Williams for Sir Richards Branson’s pre-Wimbledon party and working with my team at the BAFTA’s styling the hair for many of the nominees, as their official hairdresser for 3 consecutive years.

On the final part of my interview, I also touched base on the many instruments that I have learned to play. (Sometimes I play to my clients just before or after I have cut their hair) When I told that to Sandro he smiled and was probably thinking “ok, haircut followed by Saxophone!”

I will now wait and see how many of his listeners enjoyed the show, because I guess if it was positive, maybe I would be asked back on the show for the second installment of a “Life of a Hairdresser!”