Ronnie Woods, up close and personal 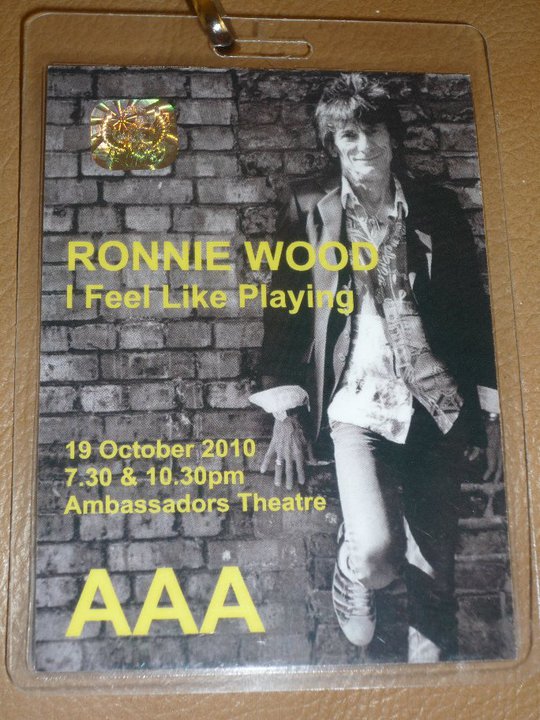 To end up styling the hair backstage for Ronnie Woods, his band and his VIP celebrity guests is an absolute gem, this was such a cool thing to do, considering it was only for one night and to a selective 350 audience.
It all started when my name was suggested as the hair artist to Sally Humphries, the producer of the Ronnie Woods gig. Once we spoke on the phone Sally was very keen to meet me, between both our busy schedules we managed to find a day that we were both free. Once we met, Sally and I had a long discussion on how we could make this all possible. The main focus of conversation was to make this as tantalizing as possible for the guest artists. We agreed that the hair & make-up service would also be offered before the second performance starting at 10.30pm. There were two performances that night and the first was to start at 7.30pm. By the end of the meeting Sally agreed that myself and one apprentice from my salon could work back stage on this amazing gig. This was important because the apprentice I chose, Marley is very good in assisting while I blow-dry etc and sometimes at these sorts of events the security is so tight that you cannot bring assistance. The next part of the meeting was to disscuss which make-up artist to use. This was so difficult for me to decide because I know and friends with so many excellent make-up artists. what made it easier was when Sally asked me for a few names, that I suppose she googled to decide who she wanted. She chose the talented make-up artist Defaf Alamri.

All that was left to do now was study the hair of the various artists that I would be possibly styling, (this part was very important). Sally did explain that although the artists knew that there was going to be hair and make-up on standby, they may not want these services on the day. This means I could be standing around with Defaf and neither of us doing any work but I suppose the worst of it is we would be rubbing shoulders with the rock stars, that didn’t sound too bad! 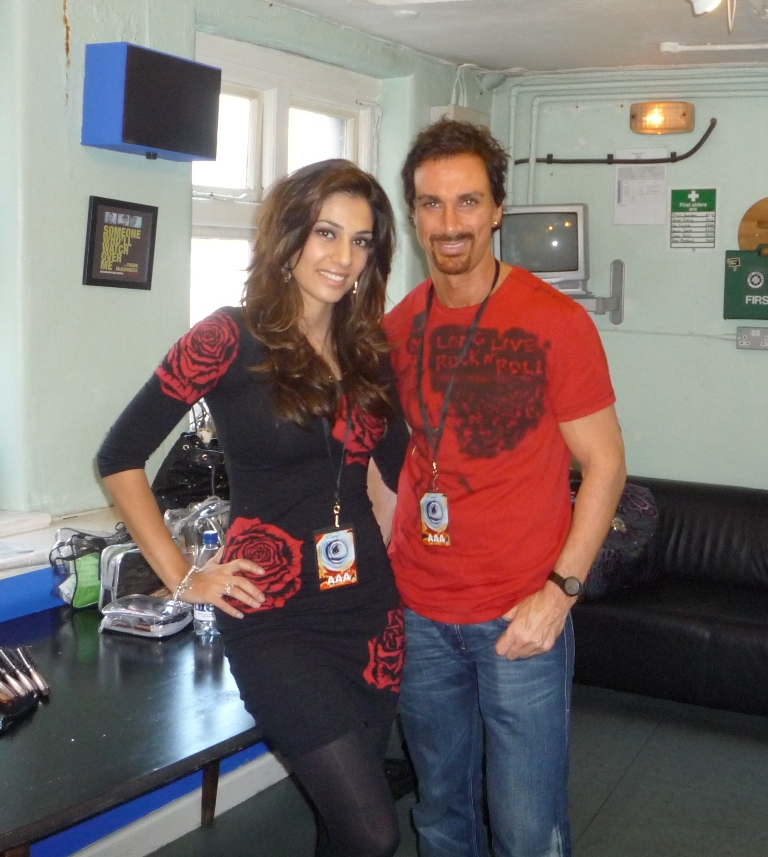 Defaf and I in the green room just before the big rush.

This was the possible celebrity line-up – Ronnie Woods, Jesse Woods (Ronnie’s son, base guitarist) the other 4 members of his band, Micha Paris, Beverly Knight, Kelly Jones from Stereophonics, Mr. Big (Chris Noth from Sex & the City) and maybe some wives and girlfriends.

The first to arrive was Beverley Knight, I asked Beverly if she wanted her hair styled, she replied not really honey but with-in a few minutes I sweet talked her into a blow-dry (as her hair wasn’t that smooth or full enough). Beverley’s hair was a little tricky as she had glued wefts in, so while I was blow-drying her hair Marley had to hold each section flat to her head by pressing down on the wefts, just in case any of them came out (better to be safe than sorry I suppose), 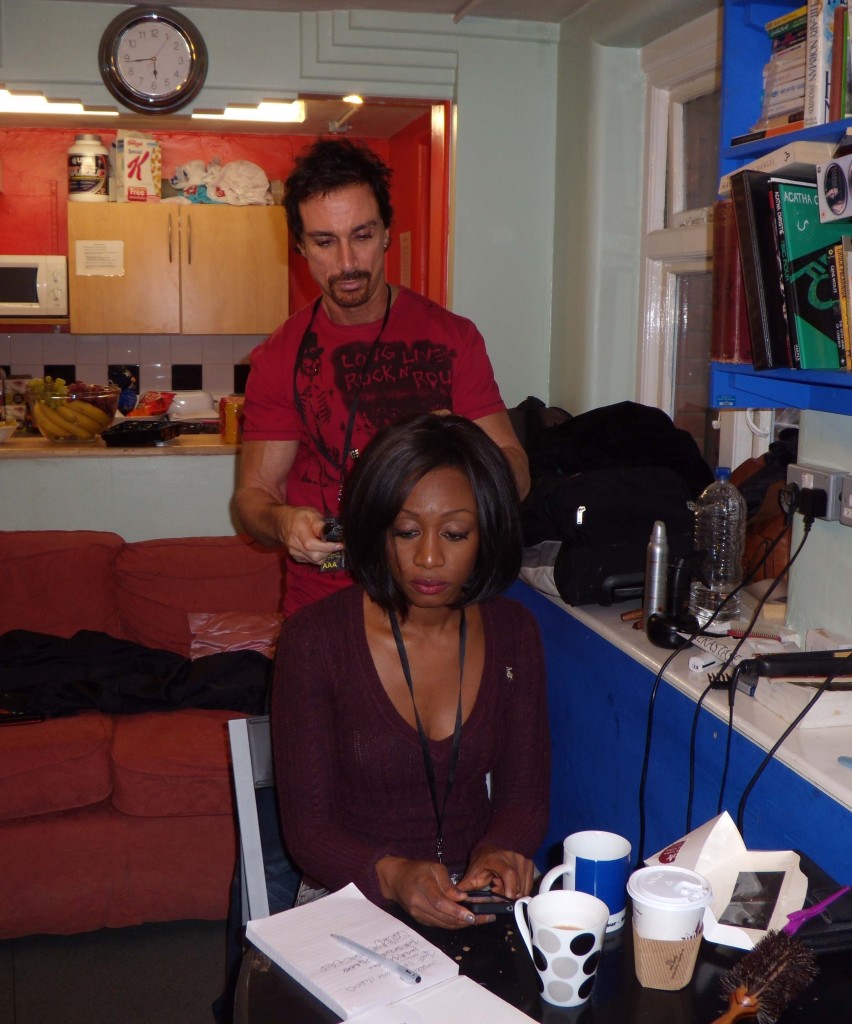 Beverley Knight concentrating on learning her vocals while I smooth out her hair.

While I was blow-drying, Mica Paris walked in and saw me in action, she also wanted some pampering with hair and make-up so Defaf started to apply the makeup, when she had finished I then began the blow-dry and boy did she have a head of hair. 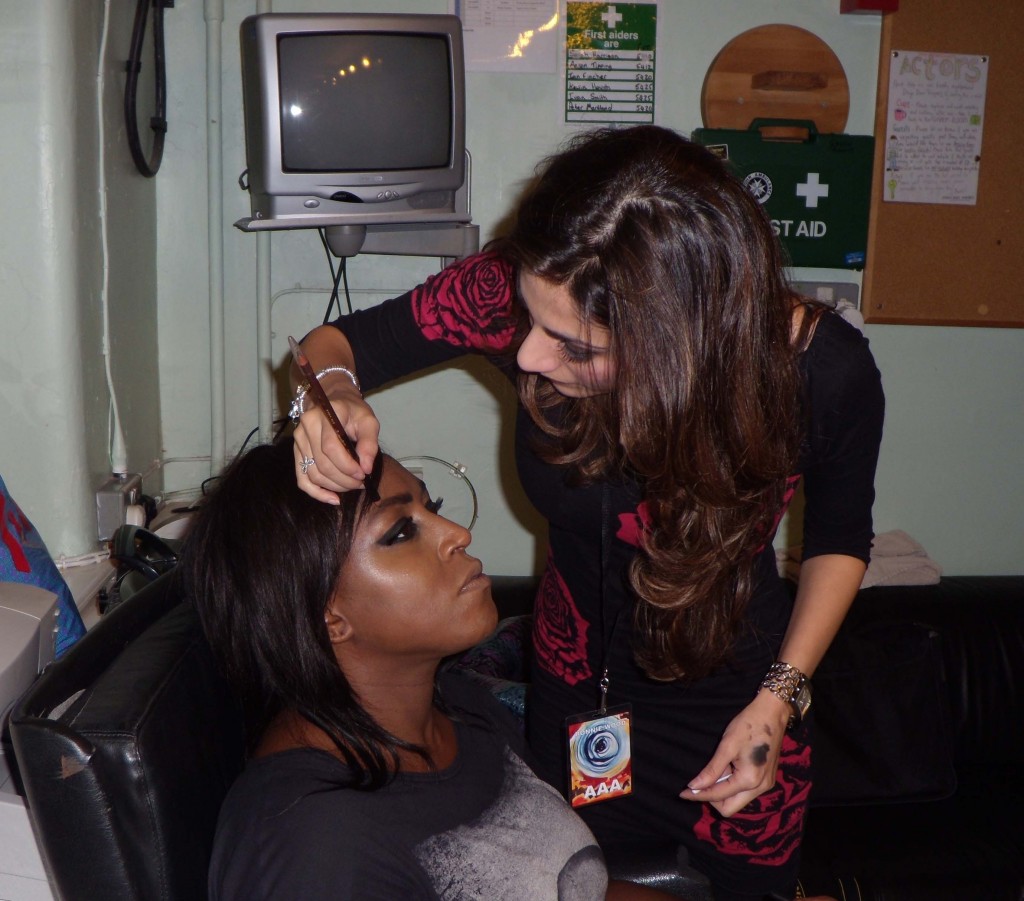 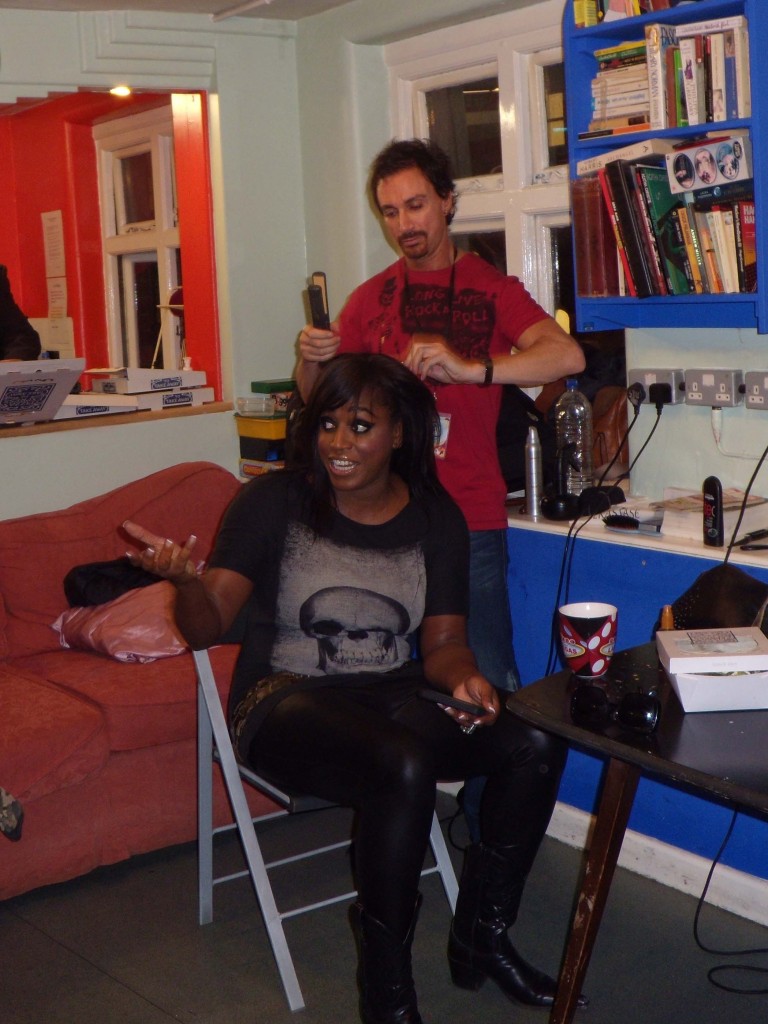 Micha Paris talks to Beverly Knight while I straighten her hair. 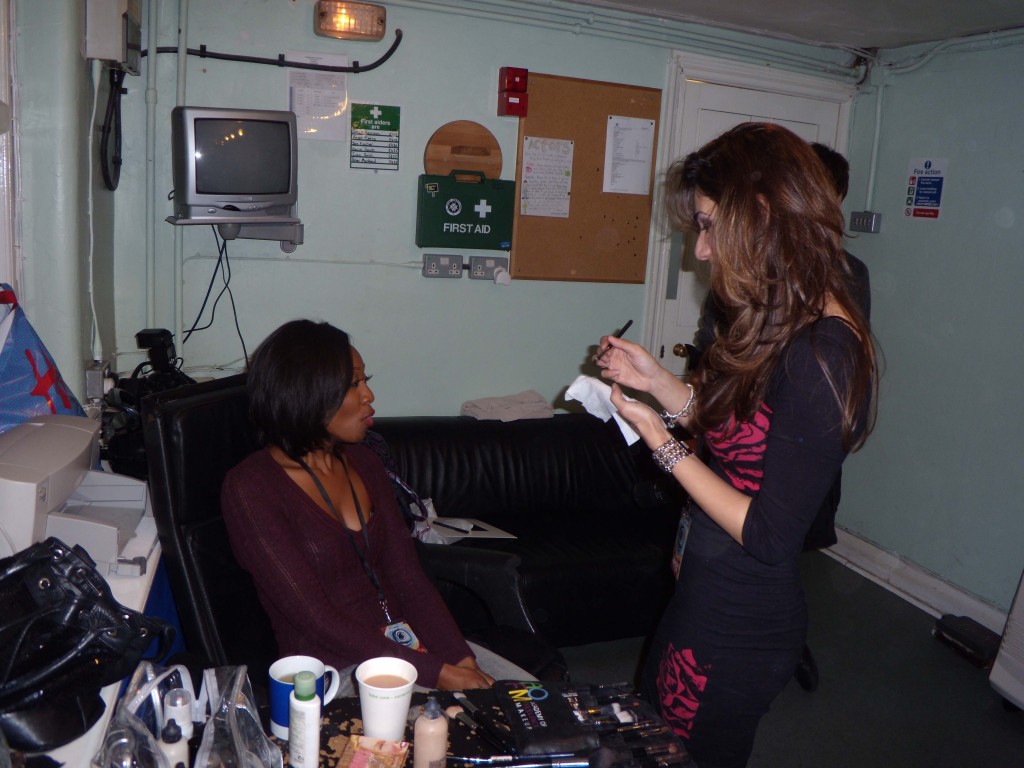 Defaf working on Beverley in between her vocals.

An hour or so later Sally came in to see how everything was going and I asked if I could invite a very dear friend of mine Annika, Sally very kindly said she would sort it, I phoned Annika straight away and told her, that made her so happy.

Most of the band and guest artists were now rehearsing so it was very quiet in the green room, two hours had passed then all of a sudden Ronnie and his band, Kelly Jones and Mr Bigs walked in with wives, girlfriends etc. Ronnie’s band members were amongst the first to want their hair and makeup done, this included a lot of hairspray and a little make-up. 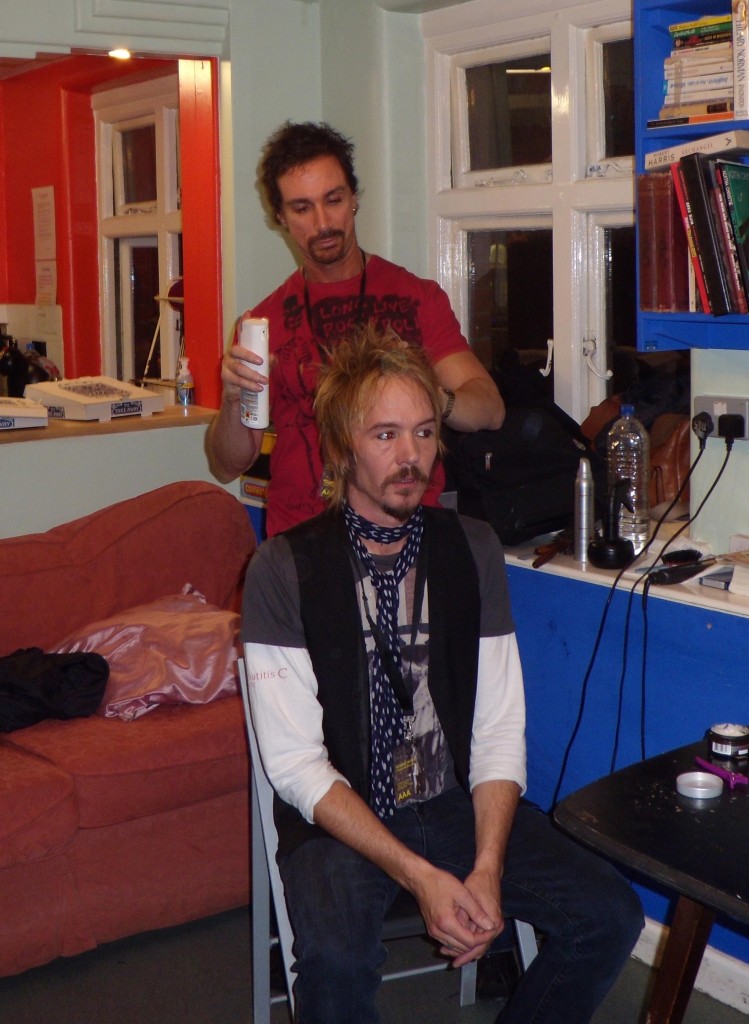 One of Ronnie’s band members. 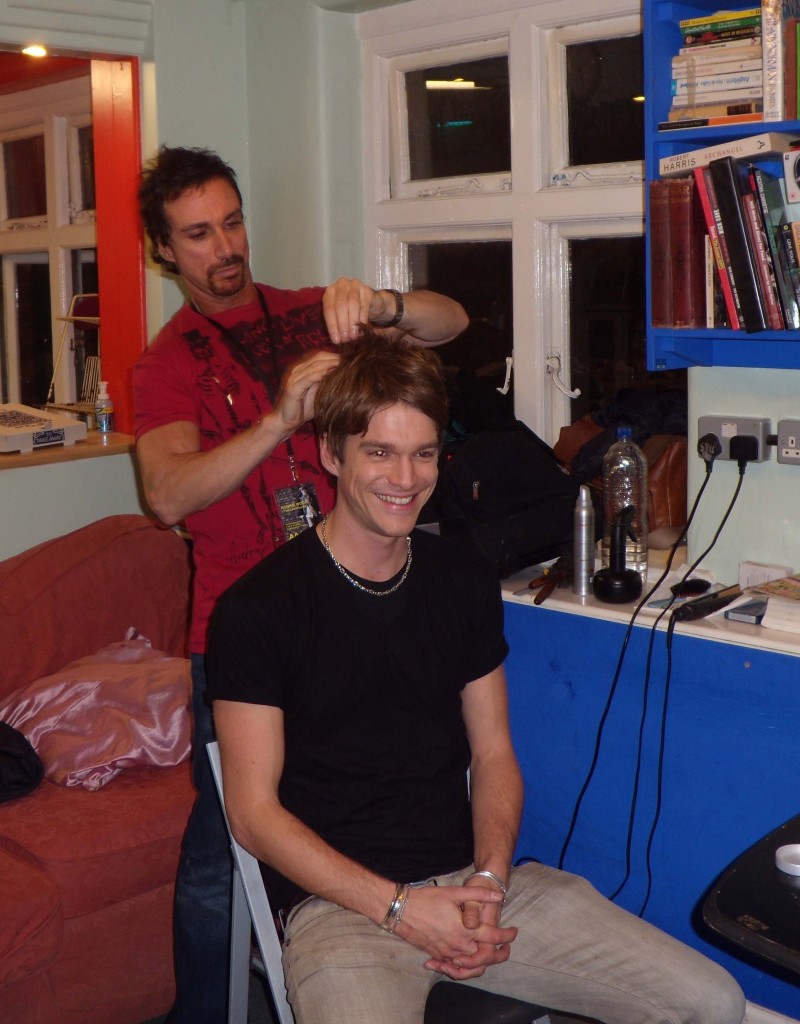 Styling Jesse Woods hair, you guessed it, it’s Ronnie’s son who plays base in his band. 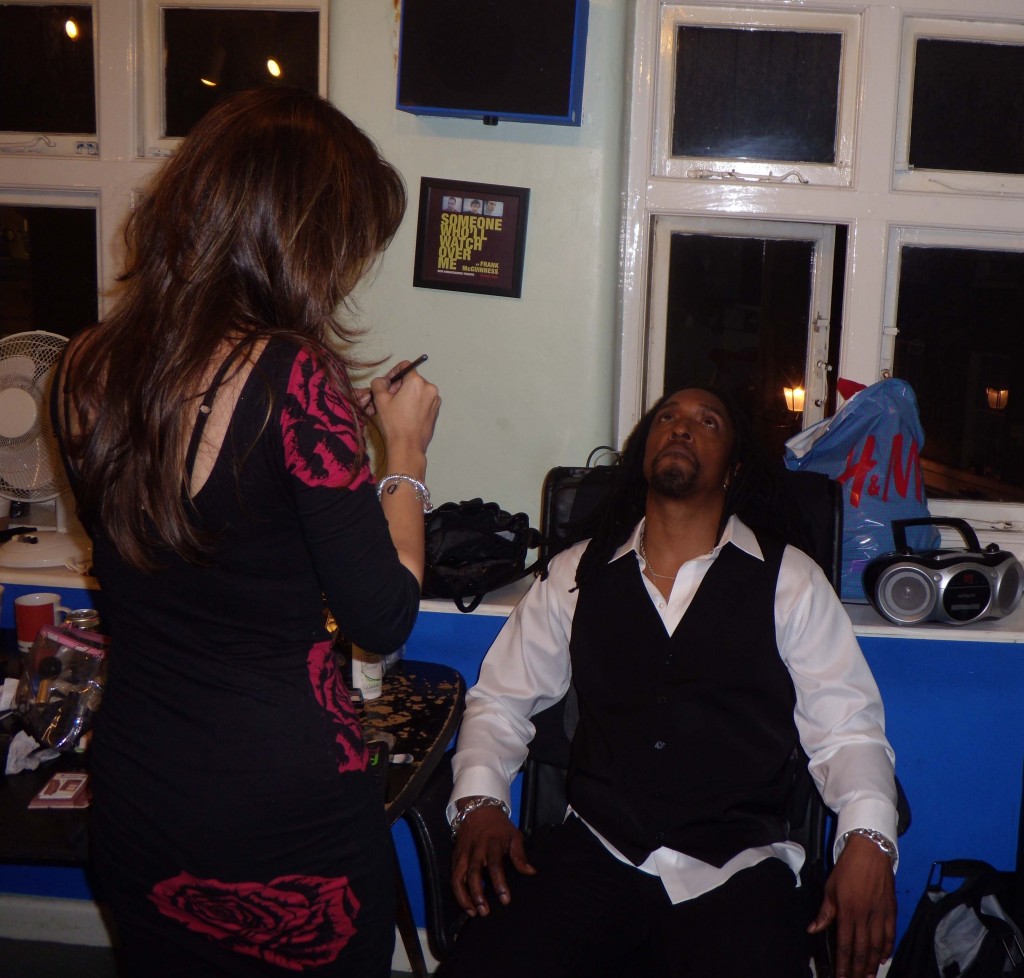 Defaf about to work her magic on Bernard Fowler who is a member of Ronnie’s band. This guy has a seriously wicked voice.

Once all band members were happy I was about to approach Ronnie and ask if he wanted his hair styled but I needed to wait for a pause in his conversation (as he was talking to his daughter-in-law and other members of his family) he only had about 20 minutes before his performance and obviously wanted to spend time with his family, so this had to be done very cool and timed to perfection. So I watched, listened, saw the pause I was looking for and thought now my son. So I did the deed and asked him, he looked at me and said “yeah that sounds cool”, I then asked him how he would like it styled he replied “you’re asking Ronnie Woods how he would like his hair, Rock & roll mate”. Silly me of course, men are generally more fussy about their hair than women, so thought it a good idea to ask but anyway Ronnie’s answer was funny and bang on, he is seriously a lovely guy. 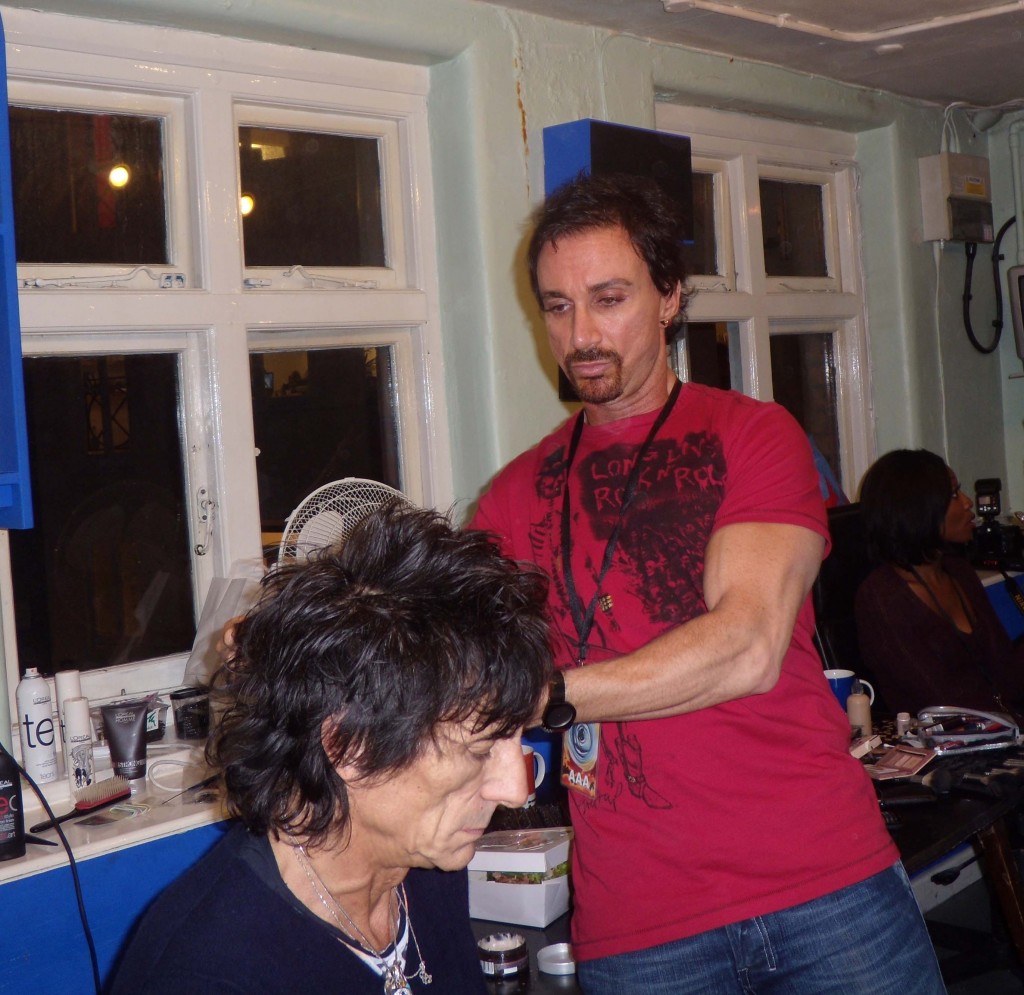 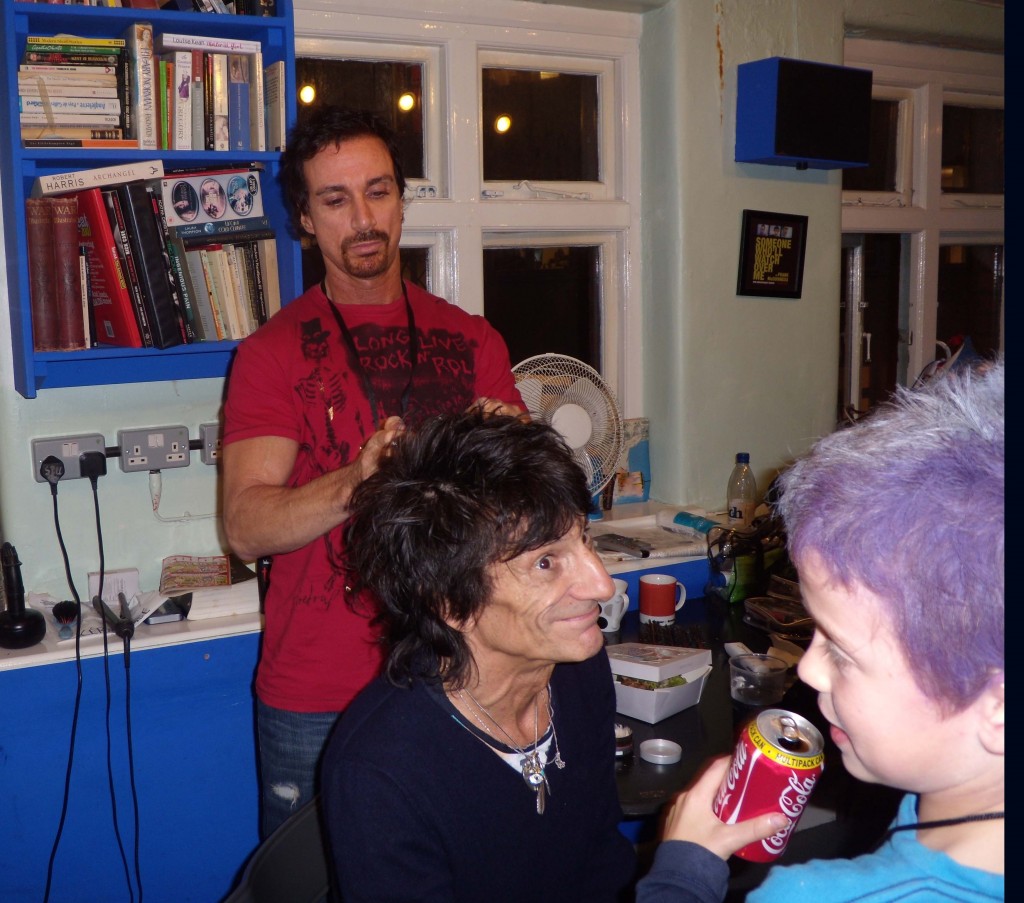 With 15 minutes left Mr. Bigs was the next one in my chair, then Kelly Jones.
Think job well done!! Both Defaf and I were really pleased that between us we managed to look after everyone, I even gave a card to Ronnie’s Brazilian girlfriend, not sure her age but looked around 28, well done Ronnie 🙂 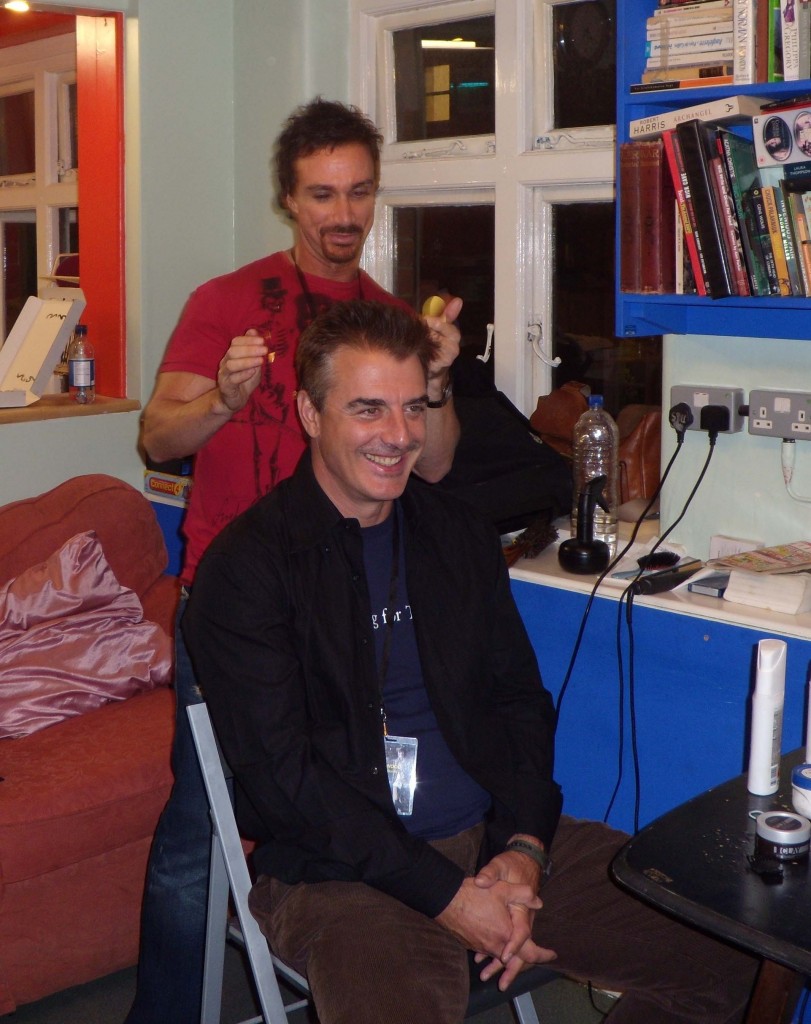 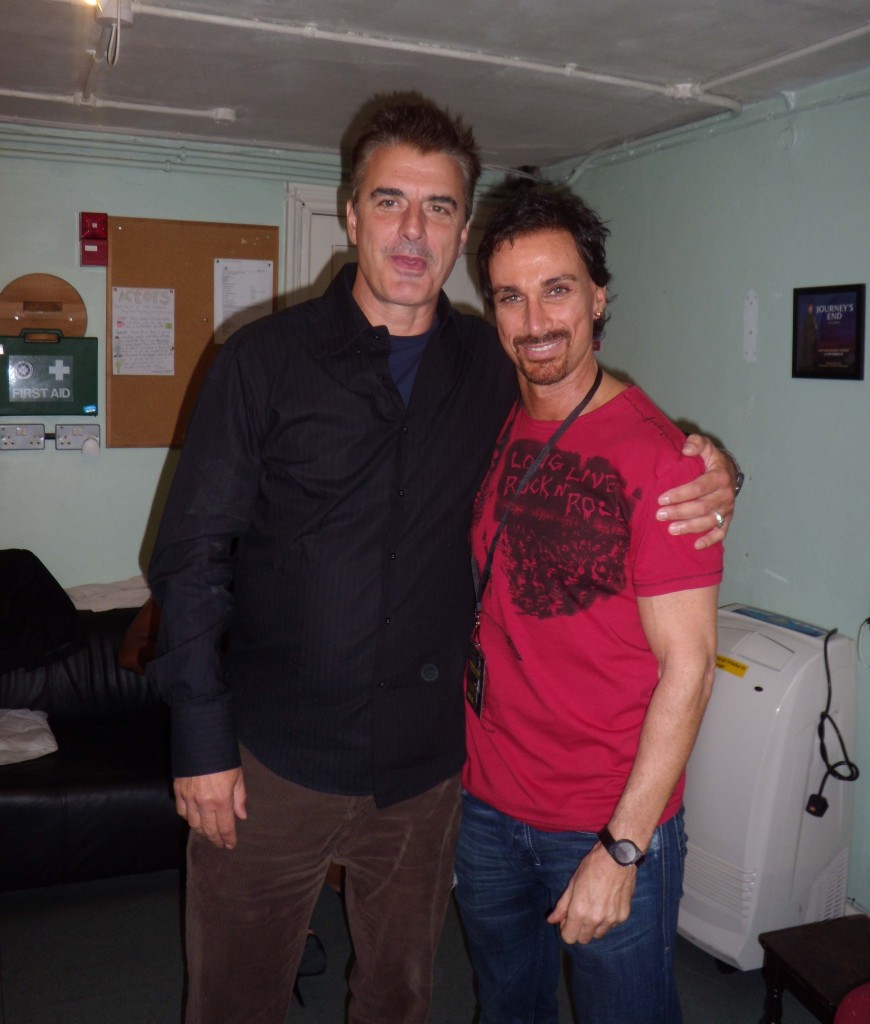 Mr. Big and I in the green room. 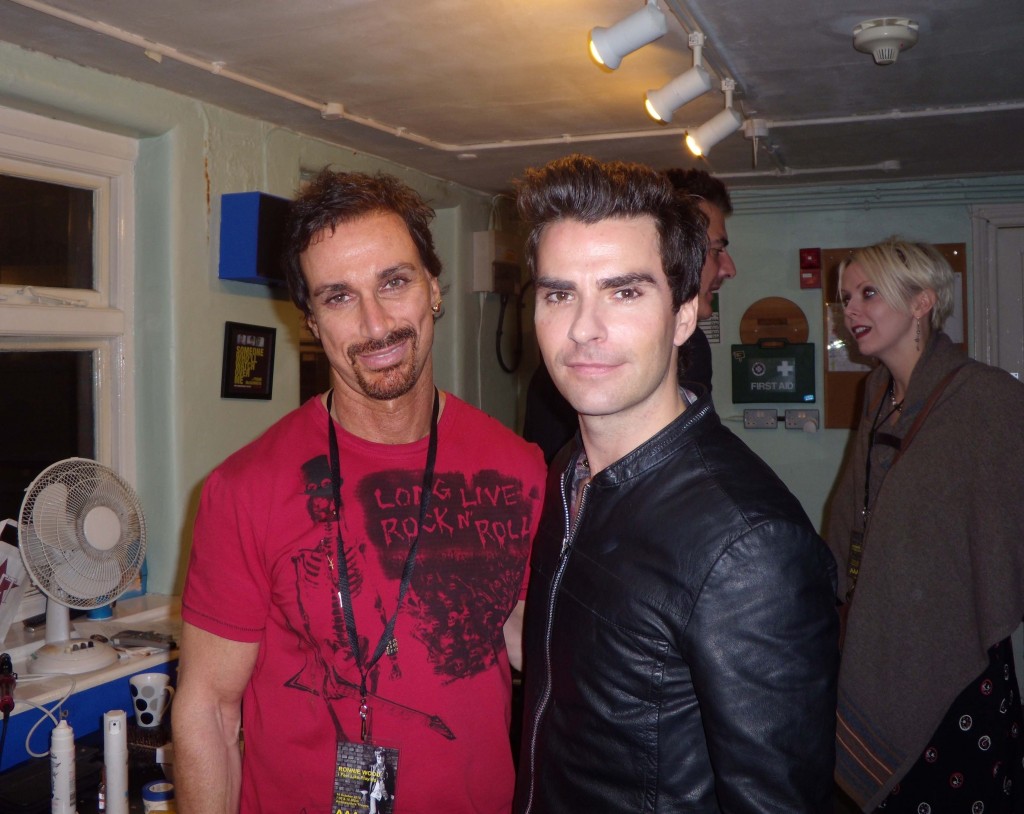 Kelly Jones and I in the green room, he didn’t need much styling.

Between Defaf, Marley and I we were trying to work a plan so that we could watch the show. This was difficult because the show was only on for one day and was a complete sell-out, so the best we could hope for was to stand somewhere in the theatre. So off we went with our AAA passes around our neck and walked straight through the side entrance doors, no one said anything so we made our way to the front of the stage and watched the show, we were so close that we could almost shake Ronnie’s hand, well you know what I mean. 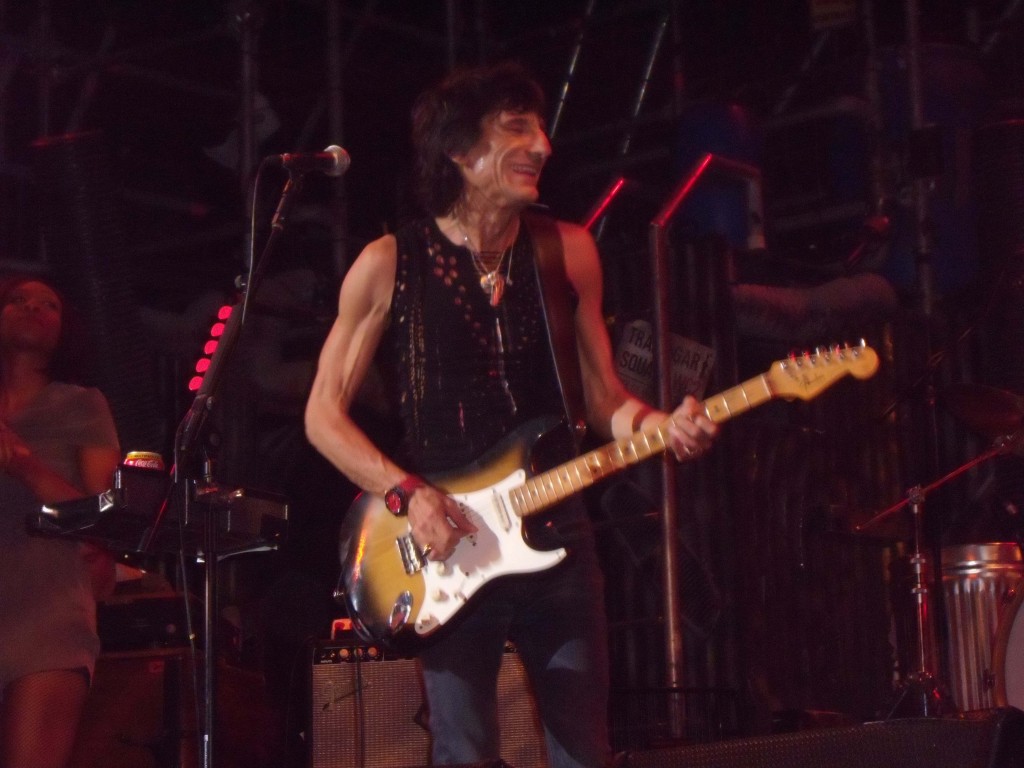 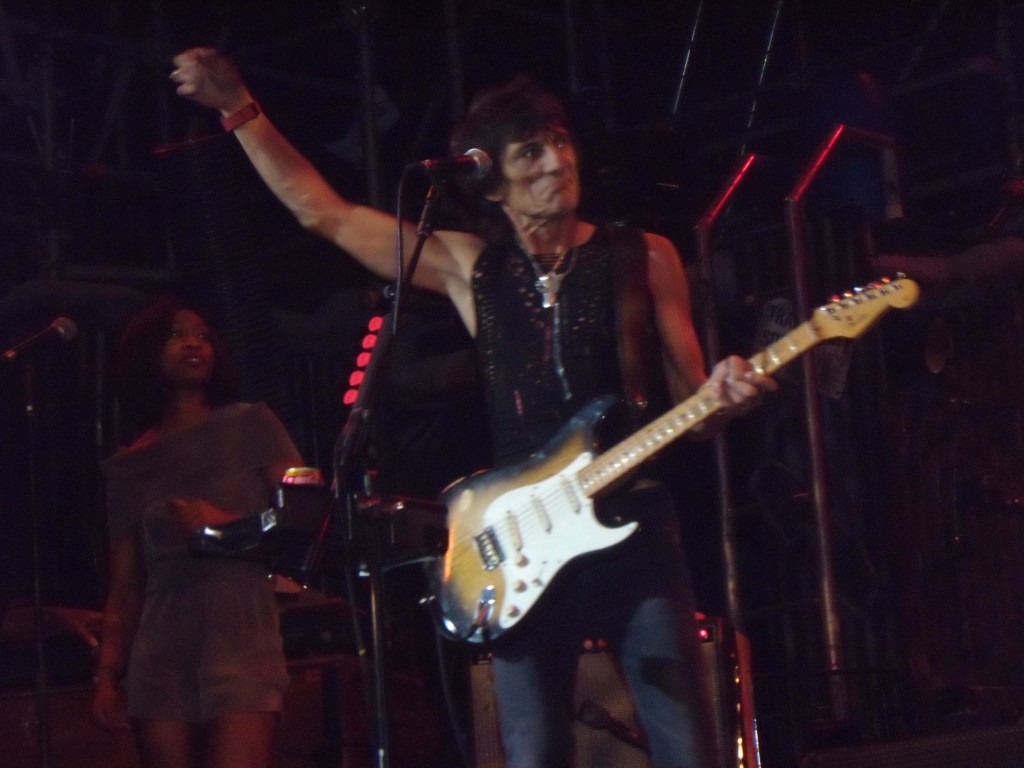 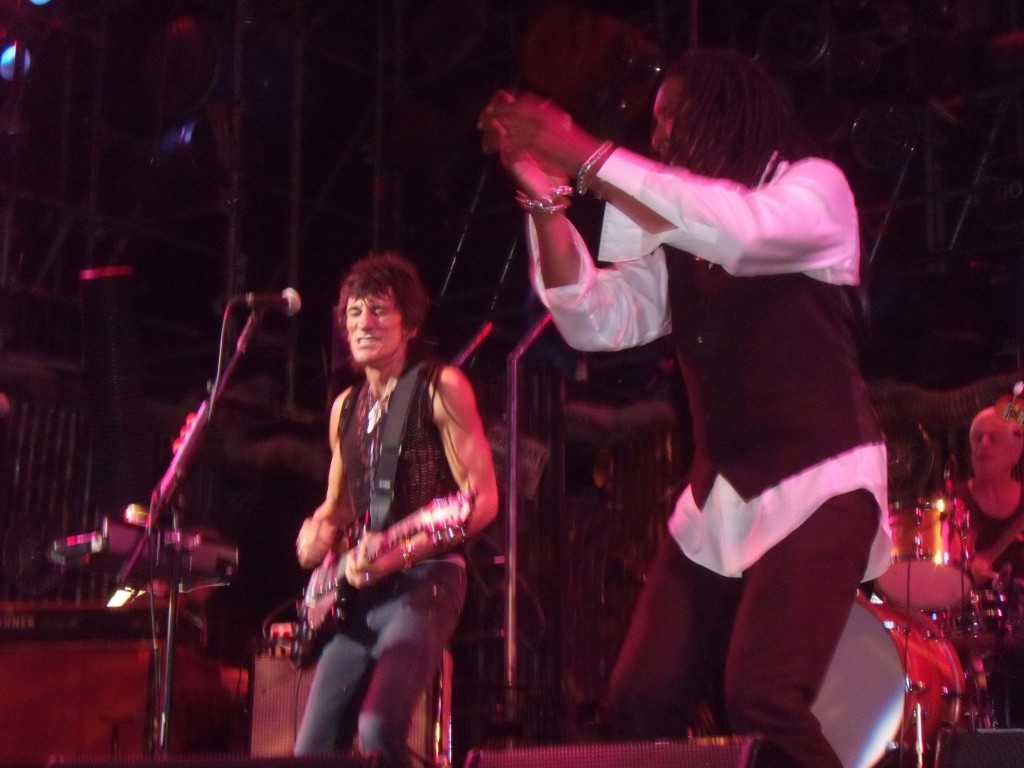 It was a great performance, especially when Micha and Beverly sung as backup for Ronnie, they had such beautiful voices. The other stand out part was the performers Stomp. They hoisted themselves high up on the stage and started to play with dustbins and all sorts, it sounded really good especially playing alongside Ronnie’s band. 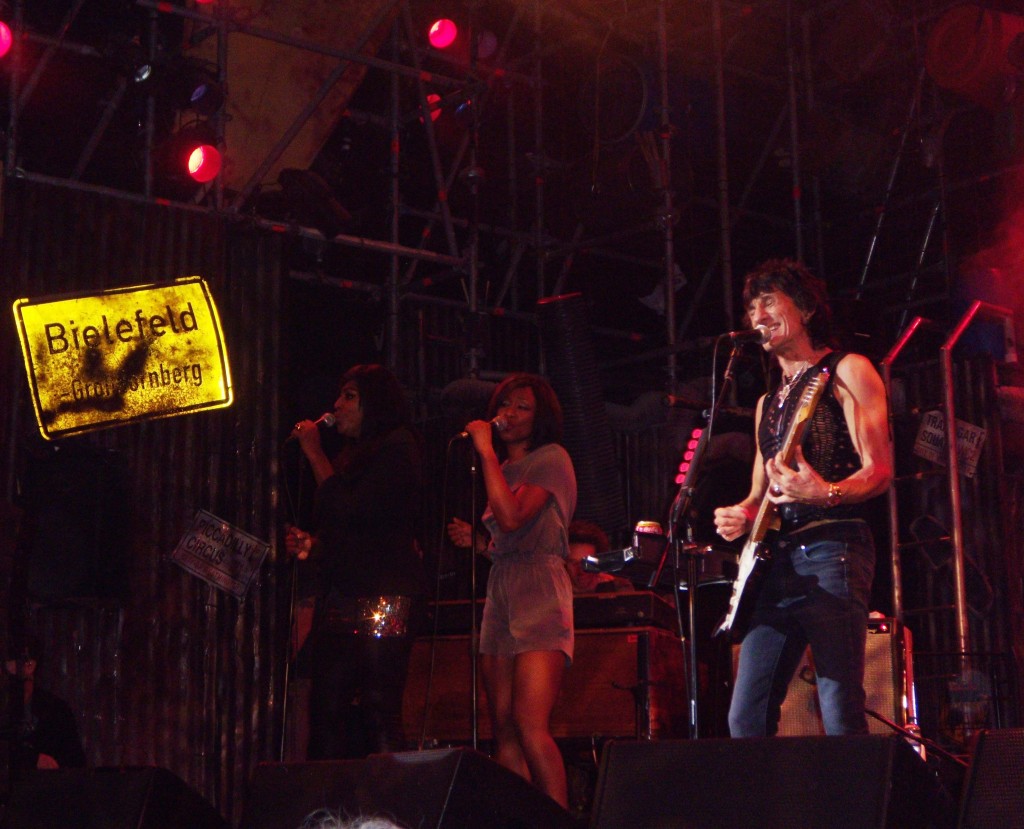 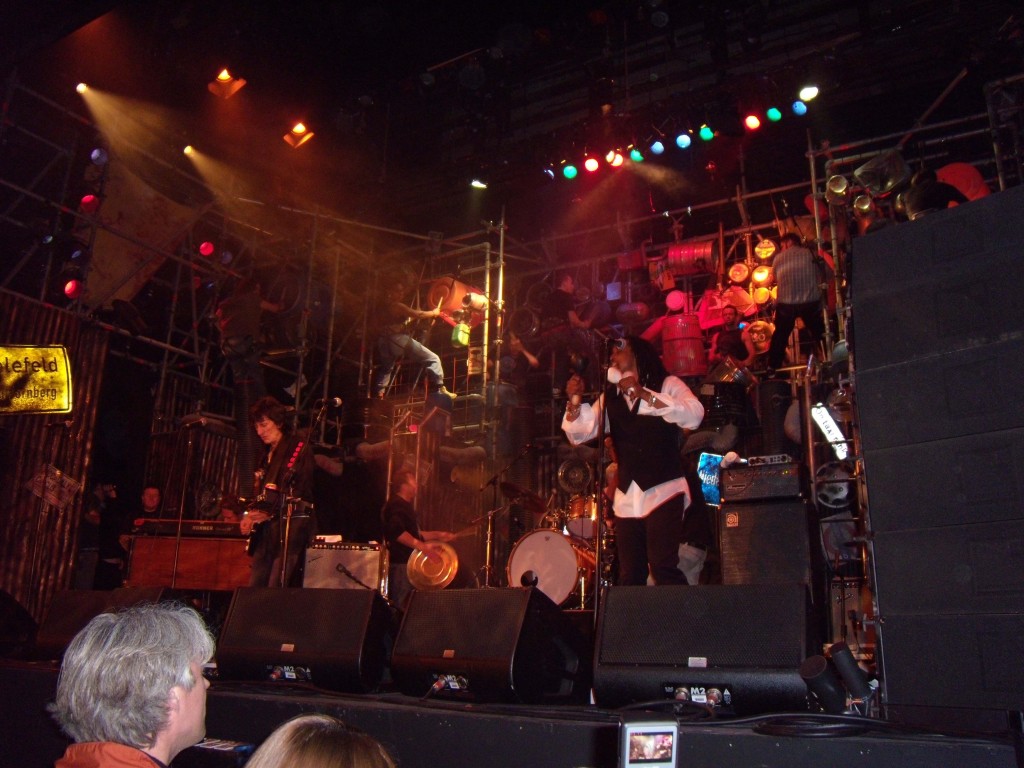 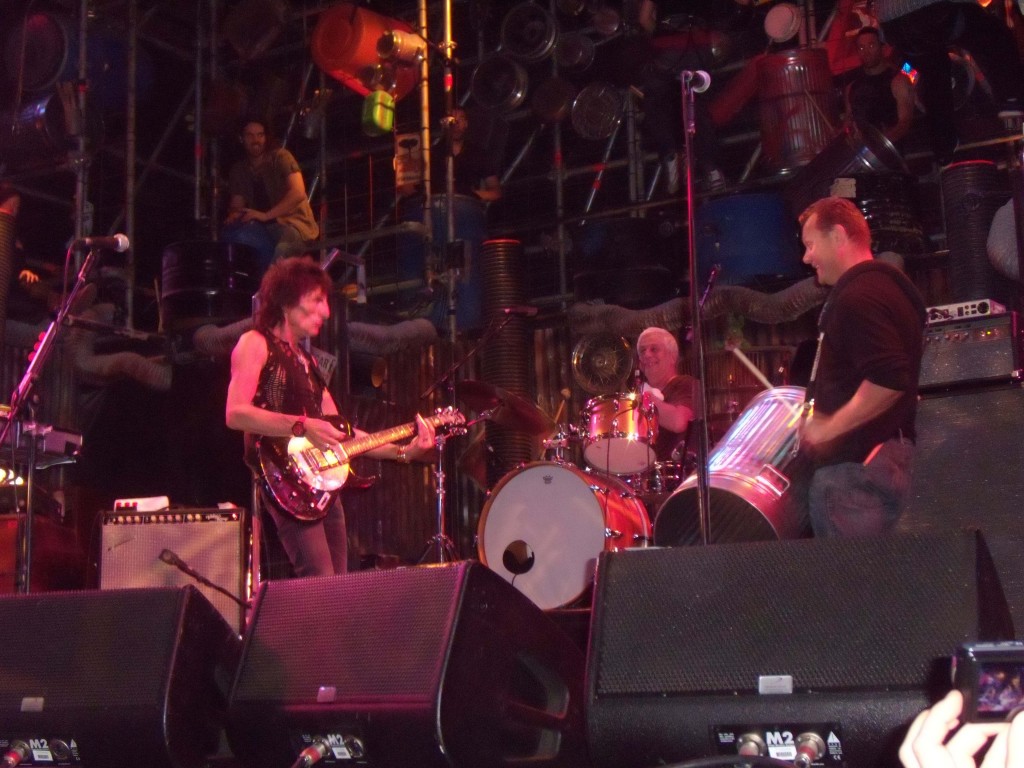 The main man from Stomp, playing a dustbin opposite Ronnie, what a great sound. 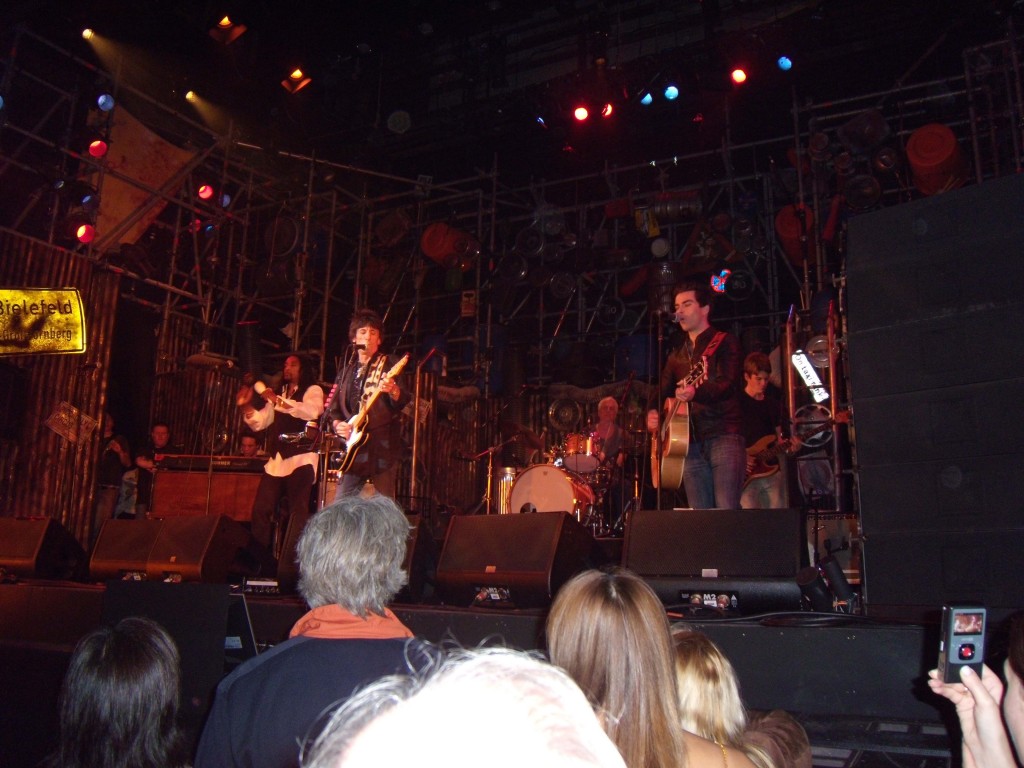 Kelly Jones from Stereophonics, on stage with Ronnie. 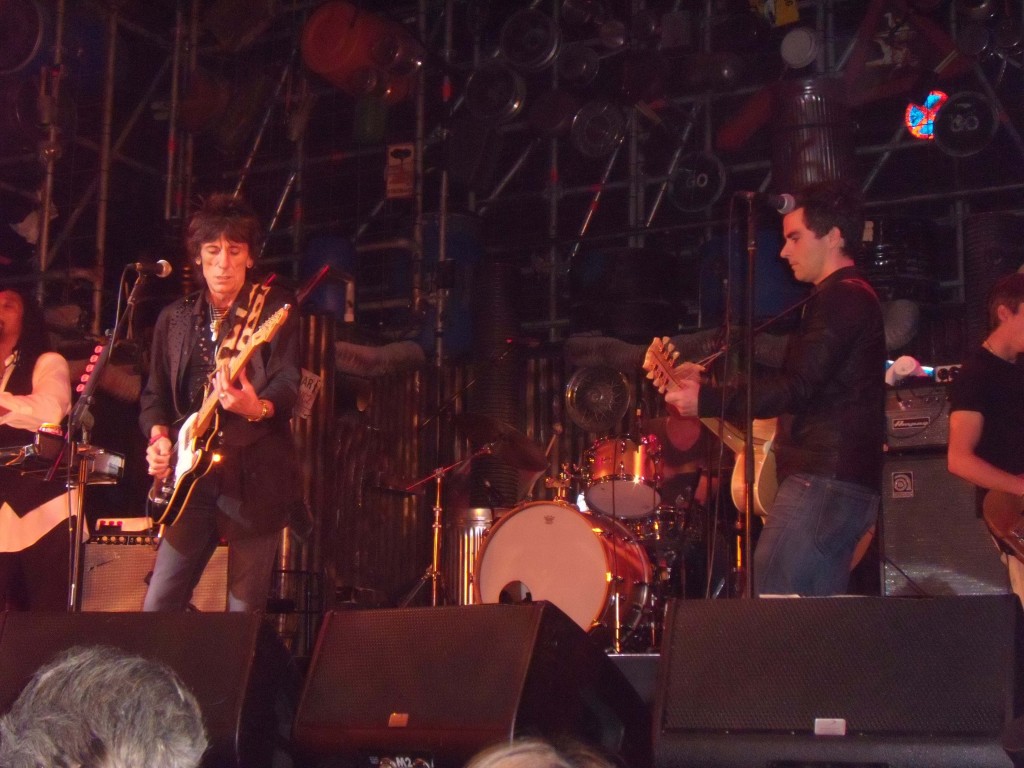 Another shot of Kelly on stage.

Once the first performance was finished Defaf and I did a hair and makeup check. I then met up with Annika, she had a great time, really enjoyed the show. 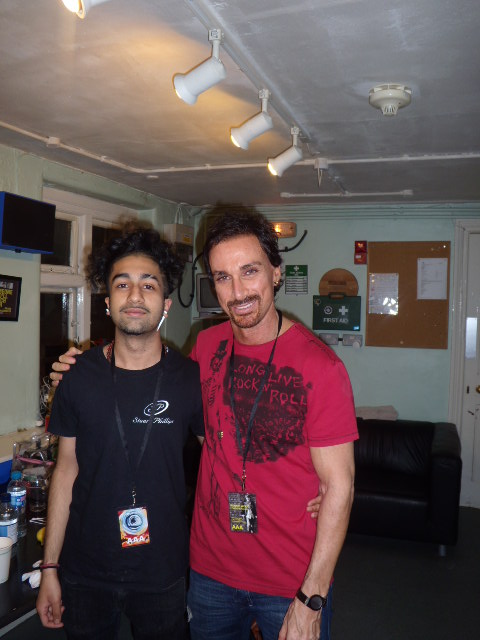 My assistant Marley and I in the green room just before the 10.30pm gig.

About an hour into the second show with all the hair finished, I decided to go home and get some much needed rest. With-in a few minutes of walking in my front door Sally phoned and asked where I was, she explained that everyone had gone to the after party at the Ivoy club. I was too tired to make my way back to London but Defaf and Marley ended up at the Ivoy. I must admit I did think about going for a few seconds but decided that because I’ve been to so many of these events like the British Comedy Awards and BAFTA’s etc that I felt I could miss out on this one.

I spoke to Sally the next day and she told me how happy all the stars were with the hair & make-up service we offered. I look forward to working with Sally again for the next exciting event.