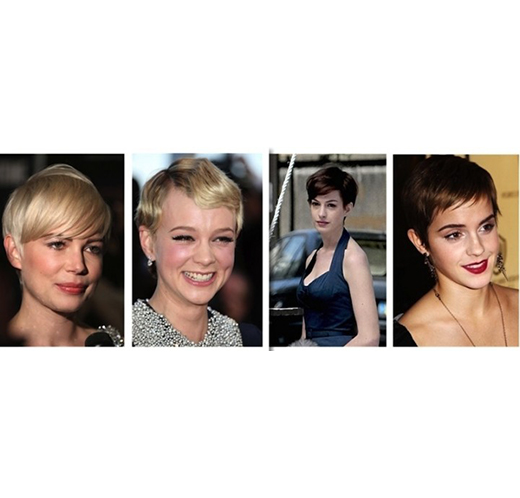 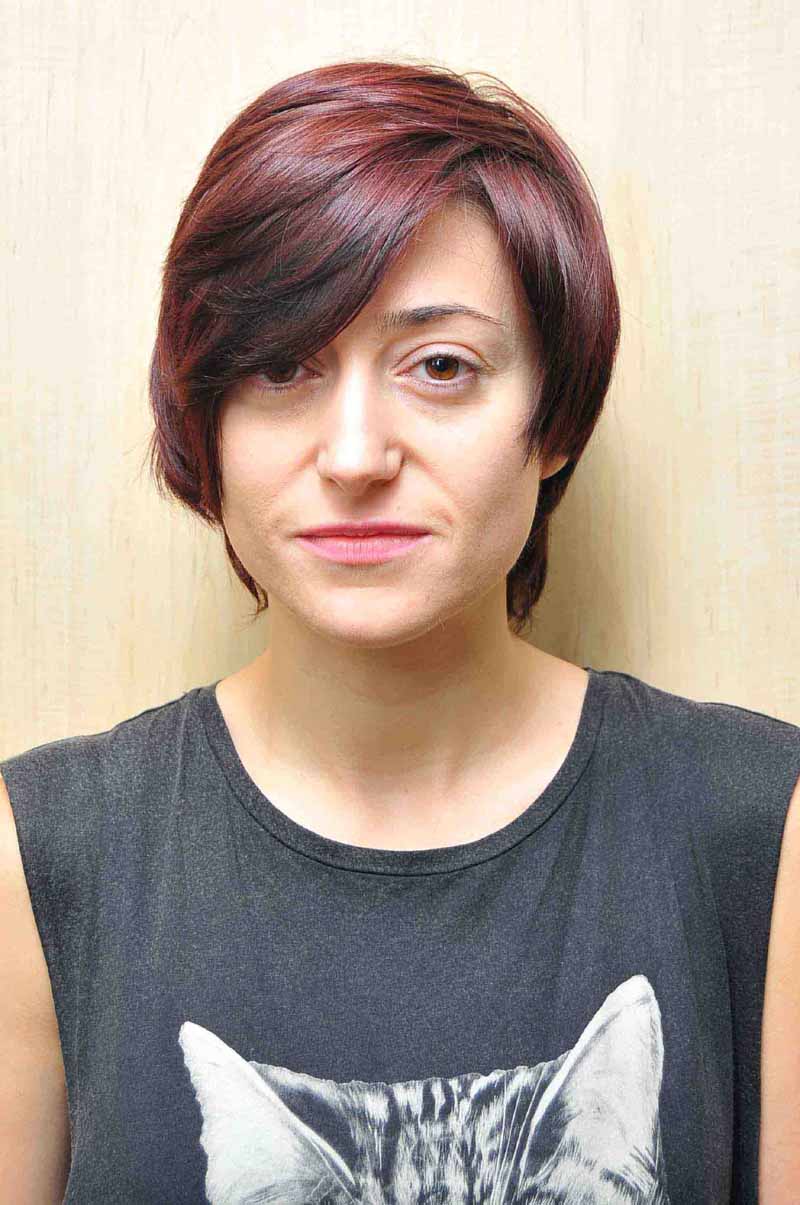 Before photograph of model Aleksandra Trepka 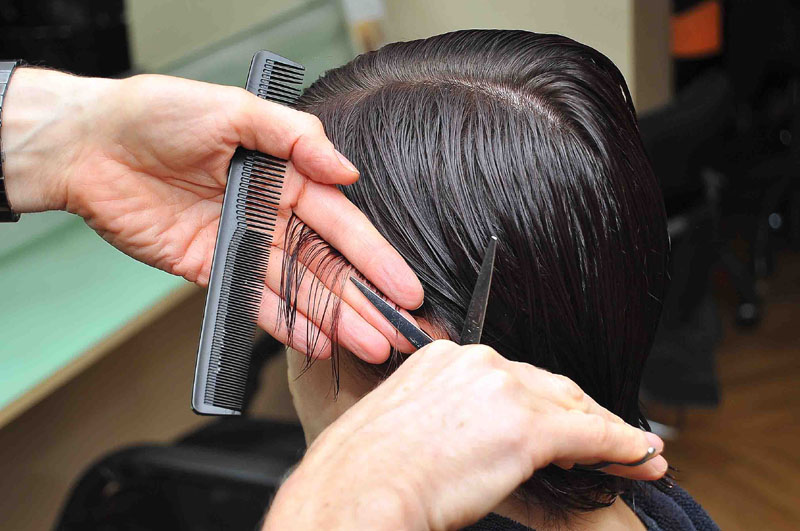 The first snip, starting at the sides to build up the shape 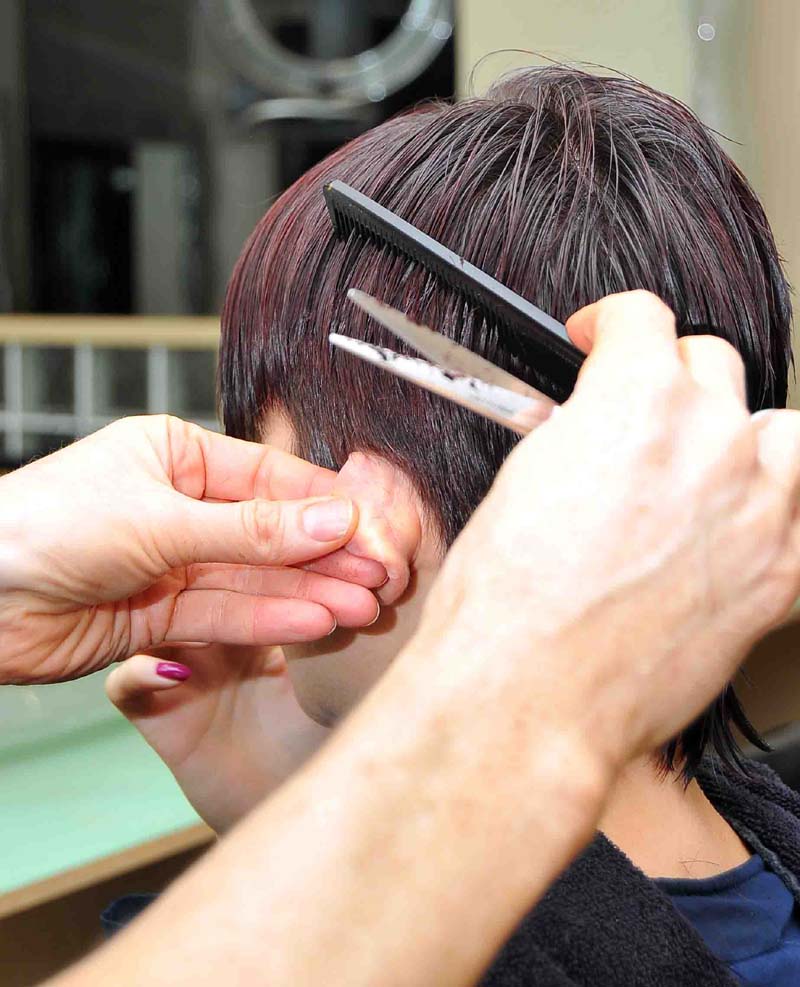 Building the graduation at the sides, making sure the hair is very clean and precisely cut around the ears 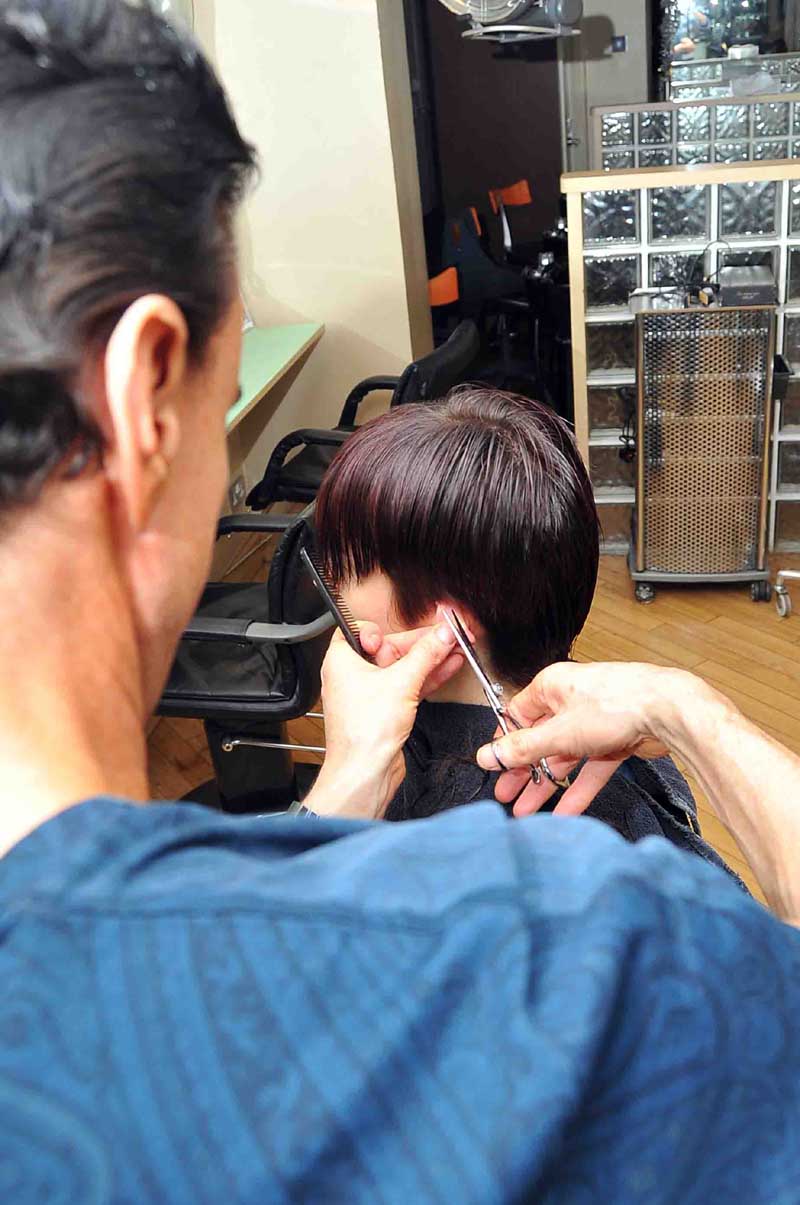 Continuing the shape of the sides into the back 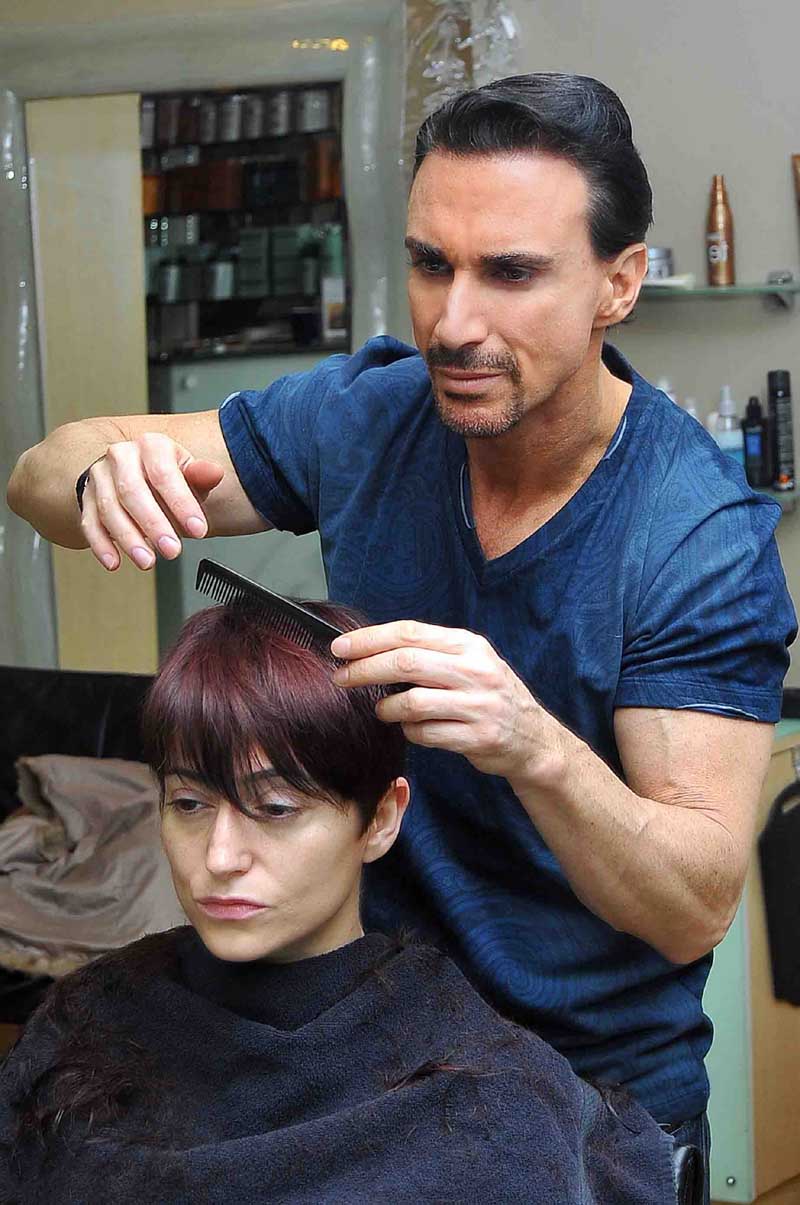 Starting to cut the top. A photograph certainly captures the concentration on my face! 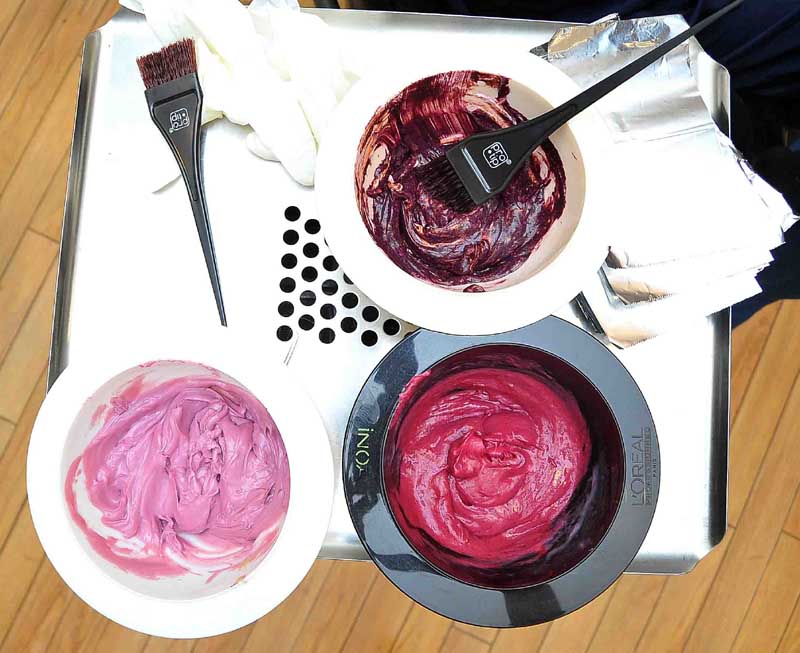 The cocktail of different colours 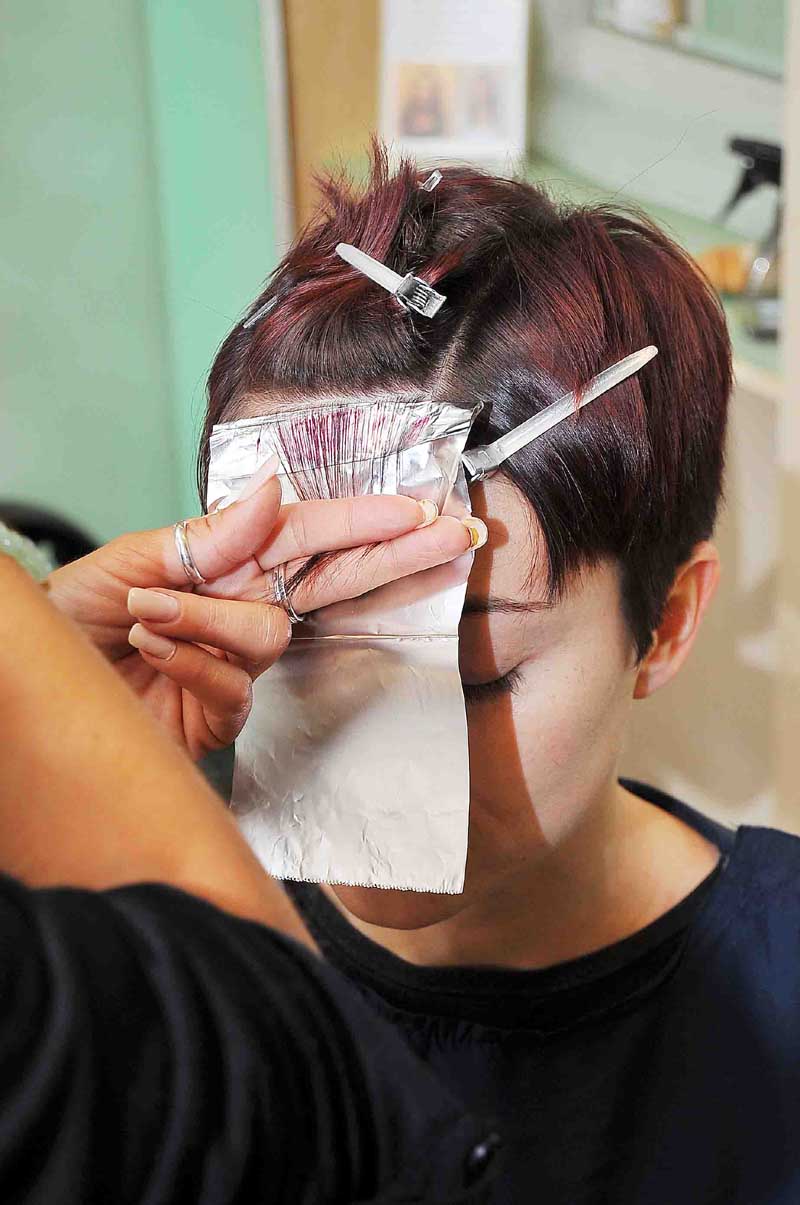 The first foil of Lara’s goes in 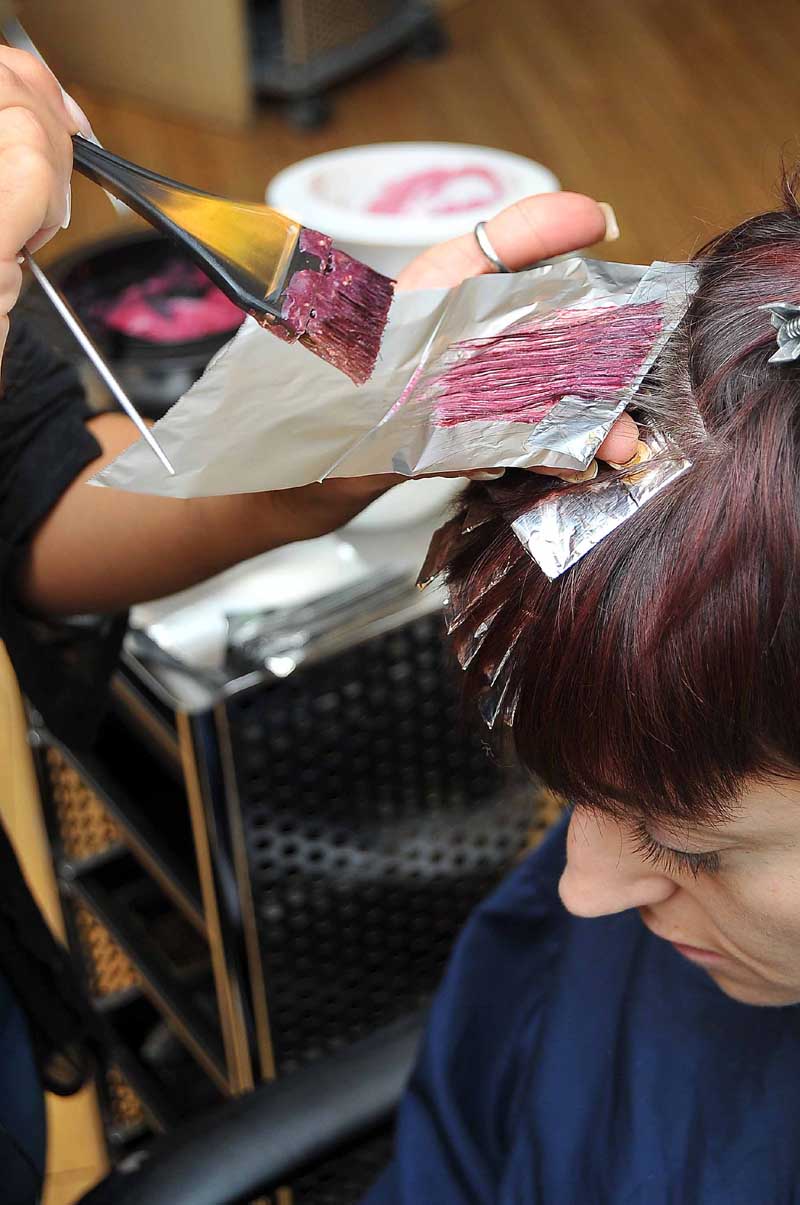 Lara uses a diagonal section to colour the hair. The part of the roots that she leaves out will have a different colour applied. 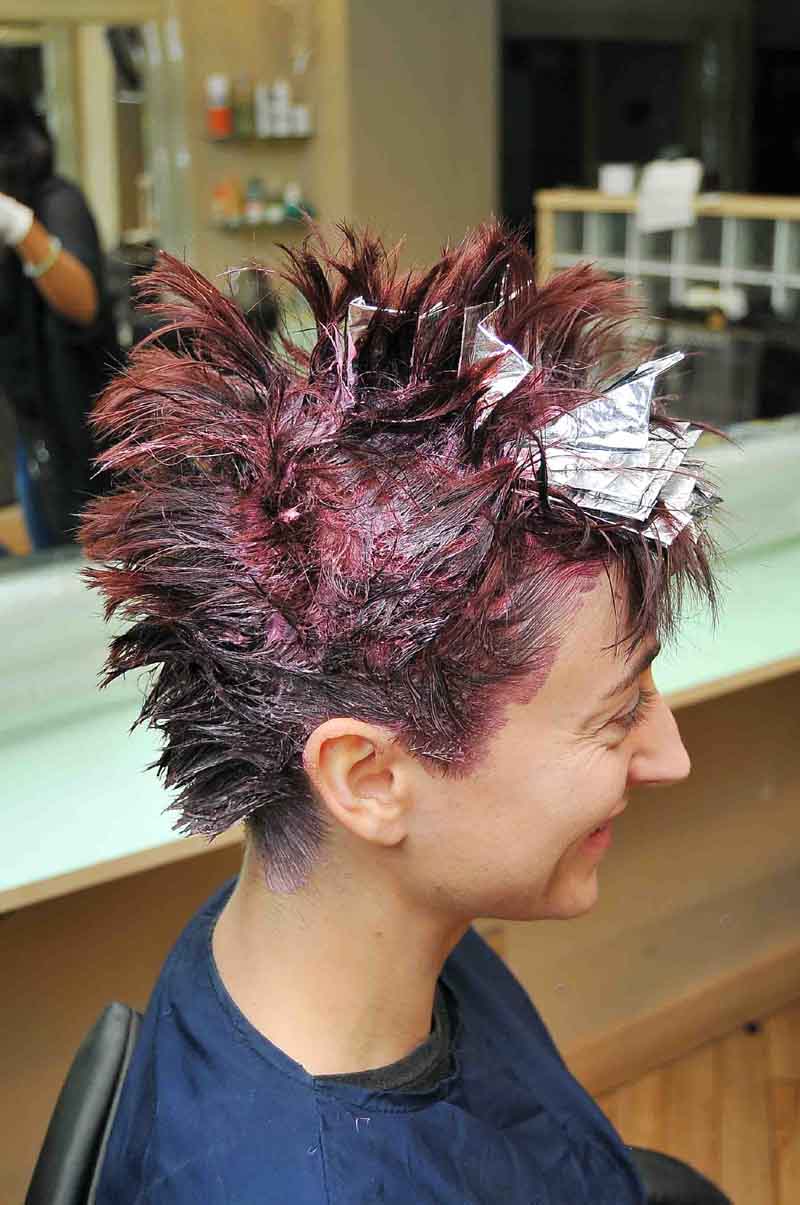 The tint has been placed in between the foils, leaving out some of the ends for effect 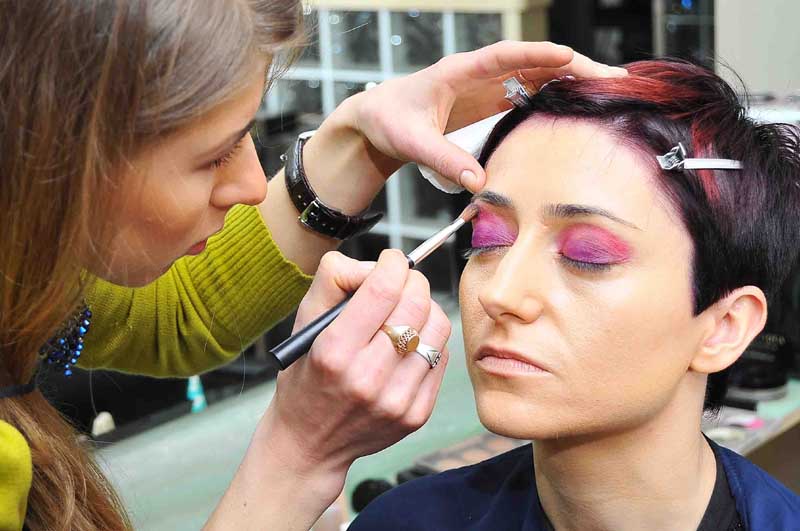 The main focus of Anna’s make-up was on the eyes, there were many colours used in order to achieve a strong look. 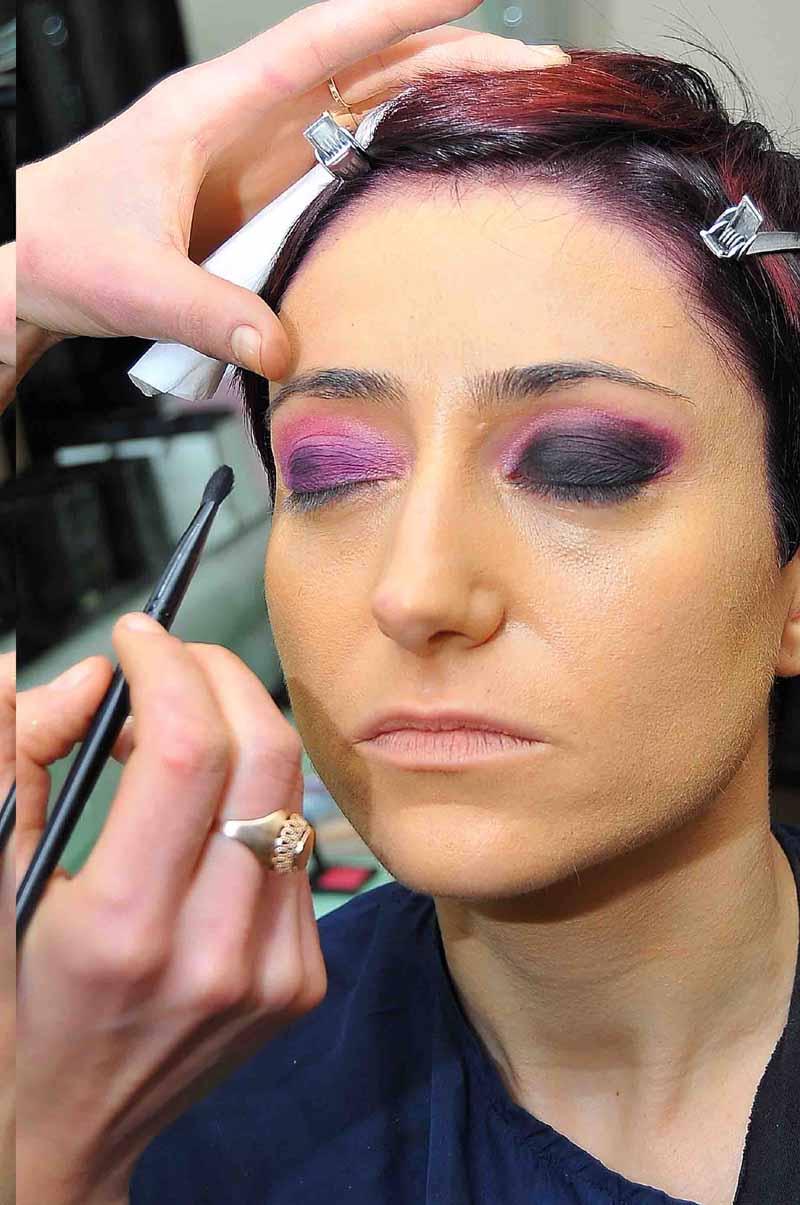 The eye make-up is progressing 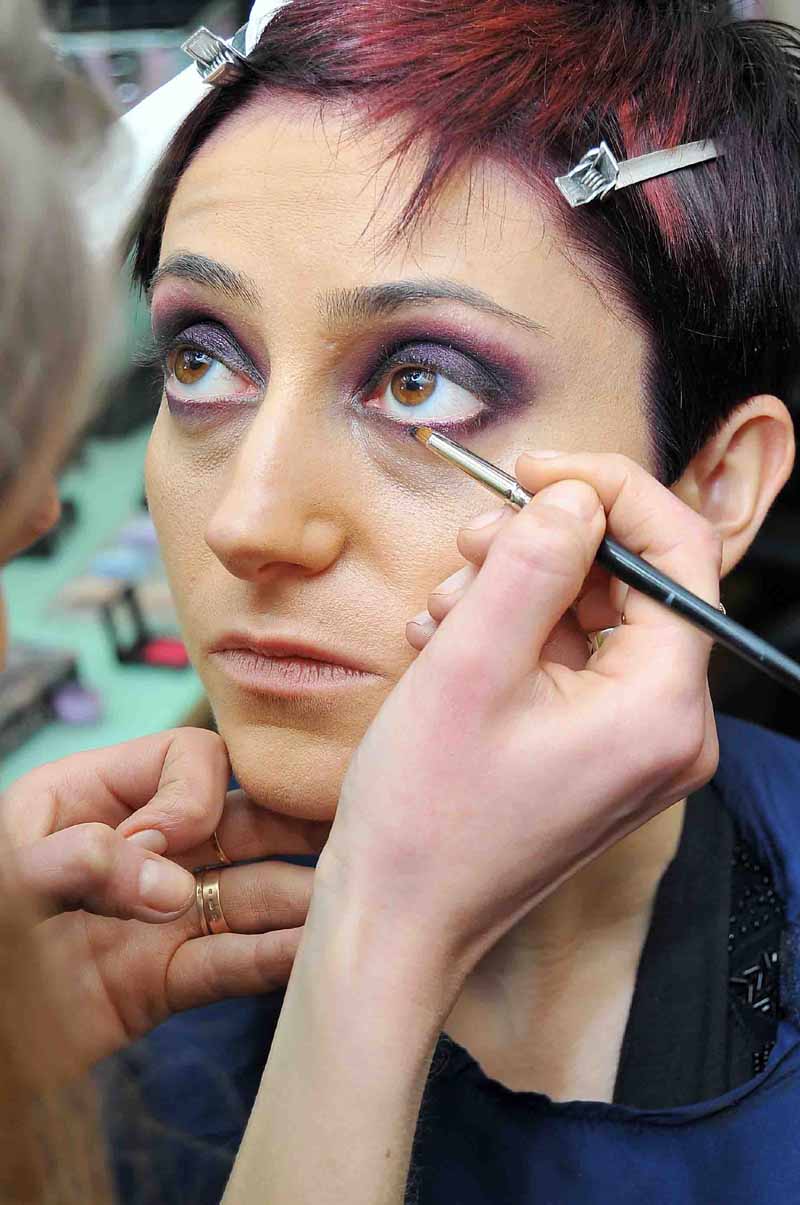 The final touches before the nude lips are applied 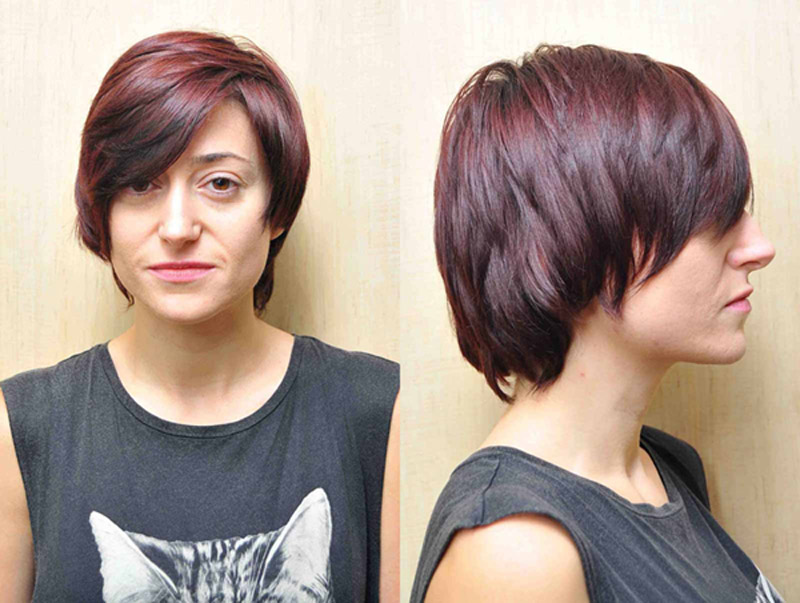 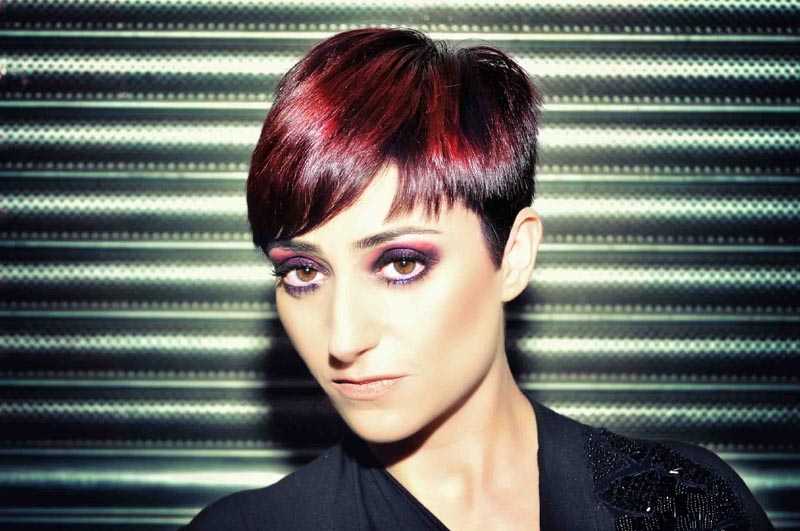 Style 1: This is the most classic way. The hair is styled straight, dressed forward and slightly to one side. 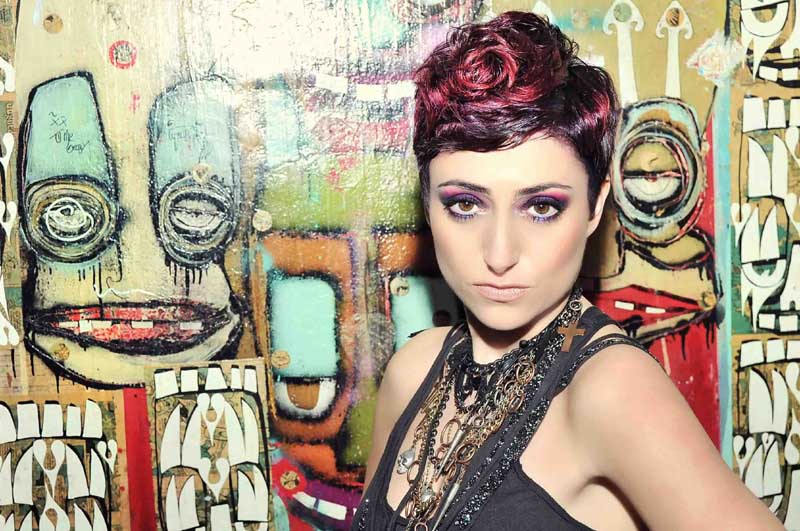 Style 2: The hair was waved at the top for thickness, texture and movement. This was created using flat irons and is worn to one side. 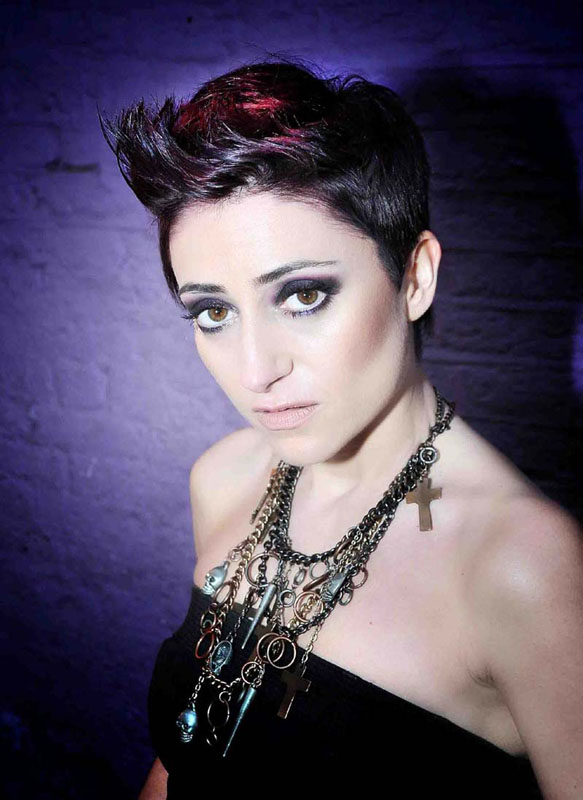 Style 3: This was first straightened, then a small amount of a non greasy wax was used. The wax was then placed in the front part of the hair, a natural quiff was then created without the aid of any backcombing.

I’ve been producing haircut makeover’s for the past two years and have created many styles for Stuart Phillips YouTube channel. A pixie cut is one of the few styles that I hadn’t demonstrated, so that was going to be my next creation.

The pixie cuts are known to be fairly short, the style is cut around the ears with a few centimeters of hair left on top. I was looking forward to demonstrating this cut for the first time on my channel!

I guessed that trying to find a pixie style would prove difficult! This is because most women don’t like cutting their hair that short, it certainly doesn’t suit everyone. The best face shape for this cut is oval, although slightly round or square would still work!

To find the right model I placed an advert on Twitter, advertising for a pixie cut, this got re-tweeted 15 times and must have been read by thousands! Within-in a few days I found my model, her name was  Aleksandra Trepka.

All the step-by-step photos would be photographed by Gökhan Göksoy. I’ve seen Gökhan’s work before as his previously taken snaps of me at various fashion events and he’s really good.

For short hair makeovers, it’s normally easier for me to cut the shape first, then the colourist would see the finished shape and create their magic accordingly.

My top colourist Lara Clark was up next and her cocktail was going to be a mix of burgundy plum brown, with magenta red and violet.

Once the colour was washed out, this was followed by the very talented make-up artist Anna Zukowska.

Anna used colours that Lara created in the hair and incorporated into the powerful eye make-up. The lips were then left natural using a nude colour.

While the makeover was progressing,  it was apparent that we were running out of time. This is because with-in the next hour or so we would run out of natural daylight! With this in mind, poor Anna was asked to speed up a little, so the pressure was on. Anna is an artist and the worst thing you can say to an artist is hurry up!! Although she was very good under pressure and finished soon after.

The next part was the dress rehearsal, Aleksandra had brought with many outfits, with-in five minutes three outfits were chosen!

It was now down to Gökhan for the final photos and myself to film the all important video!

Although a pixie cut is short, there’s many ways to style it. Below you’re see the before and after photographs, with three alternative ways to wearing the pixie haircut!

To watch the video of model Aleksandra, click on the link below: