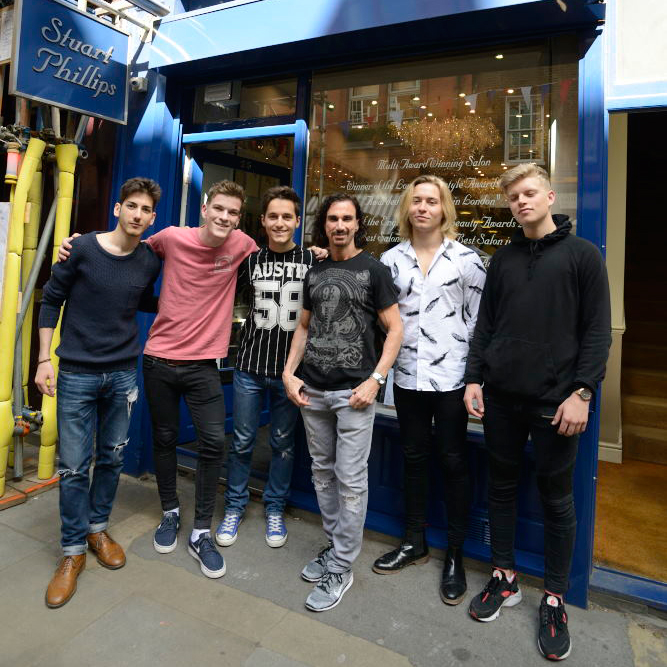 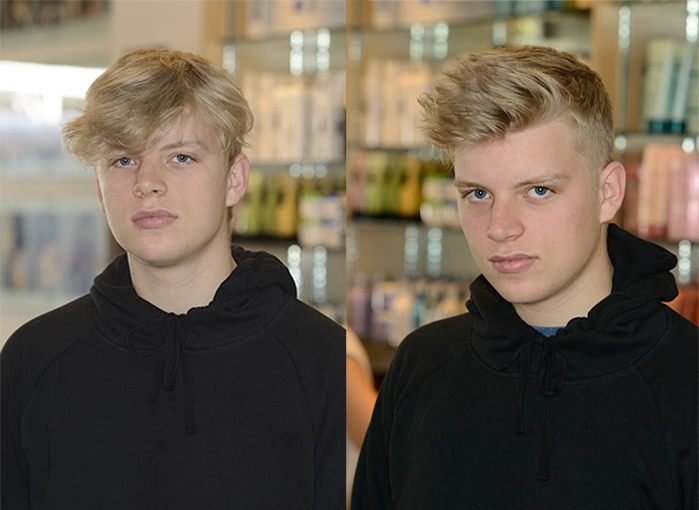 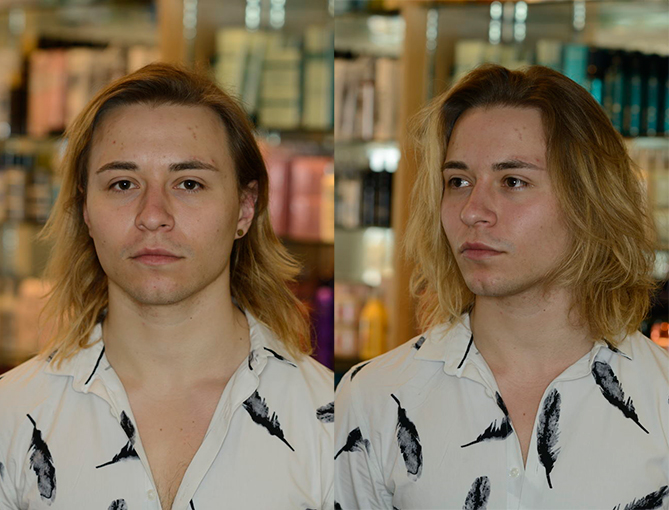 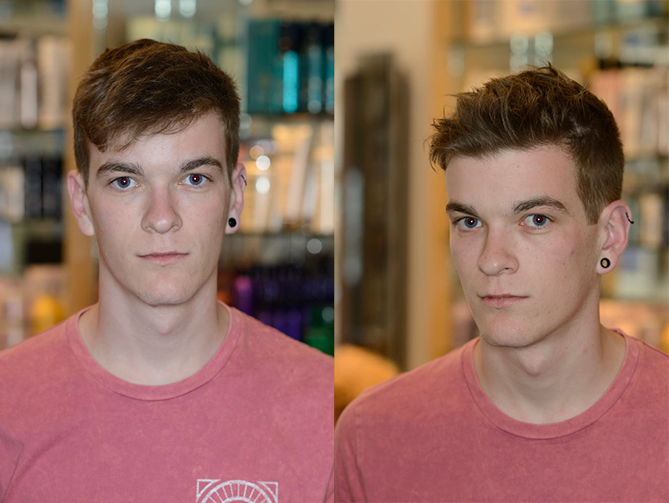 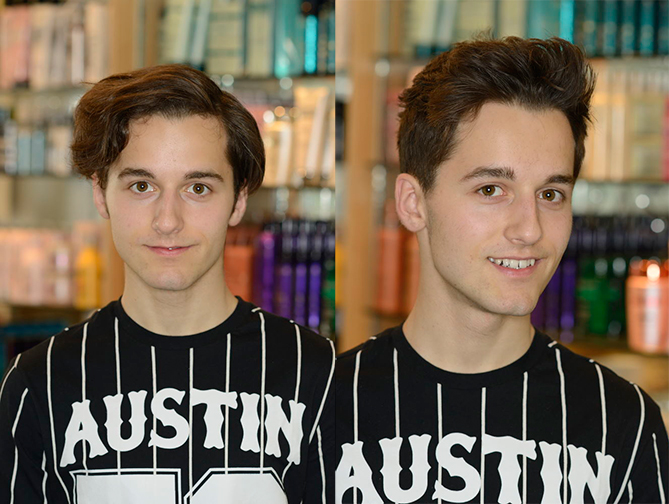 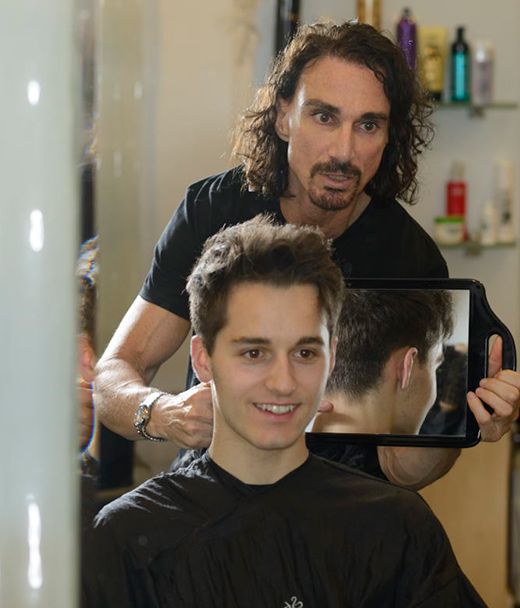 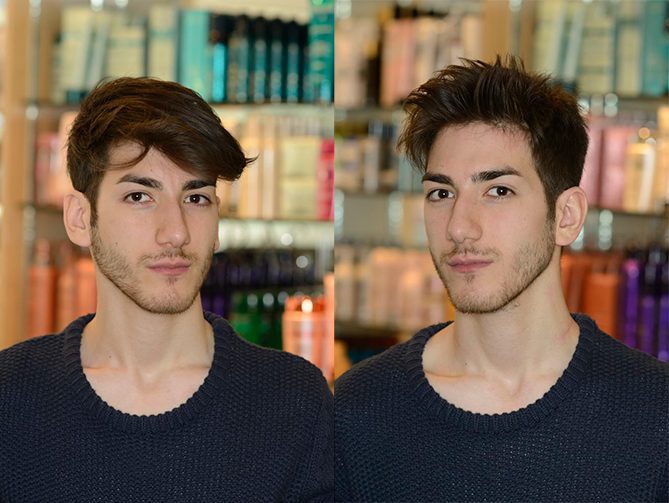 On the 23rd May 2016 all the 5 lads from the One Direction Tribute Band came into my Covent Garden salon for a re-style, so they could look similar to One Direction, ready for their all important video/photo shoot!

Some of the lads had a fair amount of hair cut off while others, a much needed trim!

When you are cutting someone’s hair making them look similar to a certain celebrity’s hairstyle, it is very important to study their face shape and bone structure, as most times it will of course not look like the celebrities, so then you would need to make a few changes in order to suit that particular head shape. That way it will not only look similar but be a far better fit to that persons face!

In this scenario the boy’s face shapes were very similar; (as the producer cast this really well) so therefore I could make the haircut look almost identical.

First up was Tom Duncan AKA Niall Horan from One Direction.

By the age of 18 Tom appeared in a Samsung commercial and also starred in a
Bollywood move in Thailand, not bad for 18 and now along with the other lads will be touring around the country and then eventually international.

Next up was Jasper Whitehead AKA Harry Styles.

Jasper has worked in Disneyland Paris in the Star Wars Jedi Academy all singing and dancing show.

He was also a cast member in ‘A student in Hollywood’s’ ‘The Theory of Everything’ motion picture. Impressive Jasper!

My third cut of the day, (or should I say trim of the day) was Bobby Bonev AKA Liam Payne.

By the age of 19 Bobby was amazingly the runner-up position in X Factor Bulgaria 2011. He was also an artist for Virginia Records from 2011-2014 and also was the performer in two Coca-Cola Happy Energy Tours in Bulgaria in 2012/2013. Great career so far and only 19!!!

My fourth haircut of the day was Henry Green AKA Louis Tomlinson.

Since the age of 7 to 15 Henry sang Solo in the West End, he also modelled for Dailymotion, Adidas and Urban Outfitters and finally recorded songs for Swiss Production Company via Simon Kay. Very talented man, wouldn’t you say?

Eddie worked on the RSC production of West Side Story and was a Member of the Cinderella cast at the London Palladium.

He also played the part of Stokes in the Southwark Playhouse Production of Carrie. What a class act Eddie!

I had a great day with the lads but most importantly they all liked their hairstyles!

I wish them all the very best 🙂

Special thanks goes to Serguei Cherkassov for all the photographs.