We all know Natalie Cassidy from Eastenders (Sonia) but more recently Natalie’s fame rose even more, she was one of the participants on Strictly Come Dancing , as soon as she came off the show, the public started to appreciate her more mainly because of her lovely down to earth personality. At the moment Natalie is involved with a lot of publicity for various magazines and now has her own column in New Magazine.

A few weeks ago I created a few styles for Natalie on the OK! Magazine shoot (where I created four different styles), this time for the New Magazine shoot I wanted to create a couple more but different to the OK! Shoot, there are only so many looks you can produce but you can always tweak up similar styles.

Natalie looks better with a wave or curl as this makes her a little softer in the face, so for this second shoot I decided to also use the heated rollers, one look the hair would be lose and down and the other styled to the side.

The shoot was a 10am start in a studio in Borough, although I arrived on time the artist was yet to arrive, the make-up artist Evelynne Stoikou and the Clothes stylist Marian Cotterill were already there, it was nice to see them both again, everybody else I had not seen before, that included, the photographer, celebrity interviewer and the magazine picture editor. Twenty minutes later Natalie walked through the door, a ray of sunshine she was, remember Natalie was four months pregnant yet still had the energy to personally give everybody a big hug with a lovely sincere smile.

The photos were taken against a white background which was very different from the OK! Shoot as most of those shots were taken outside in a beautiful garden, at least I didn’t have to keep walking out side to the gardens and back in again each time we did a shot, (the gardens in the last shoot was about a 5 minute walk each way, I know that doesn’t sound far but when you’re doing that continuously it becomes slightly tiring) this time was much easier being in a studio. 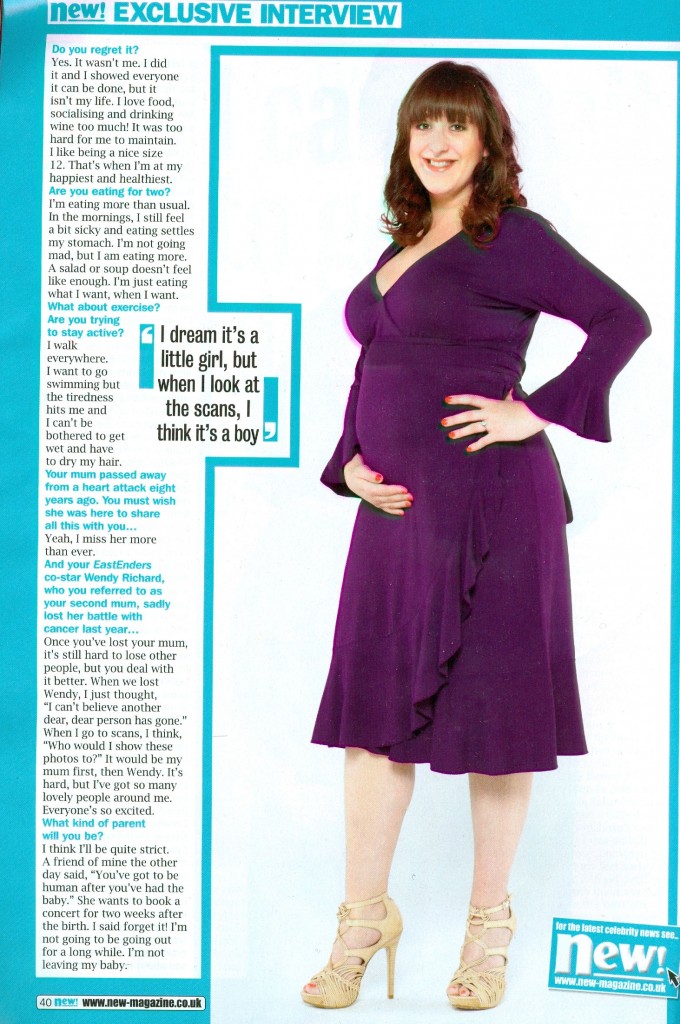 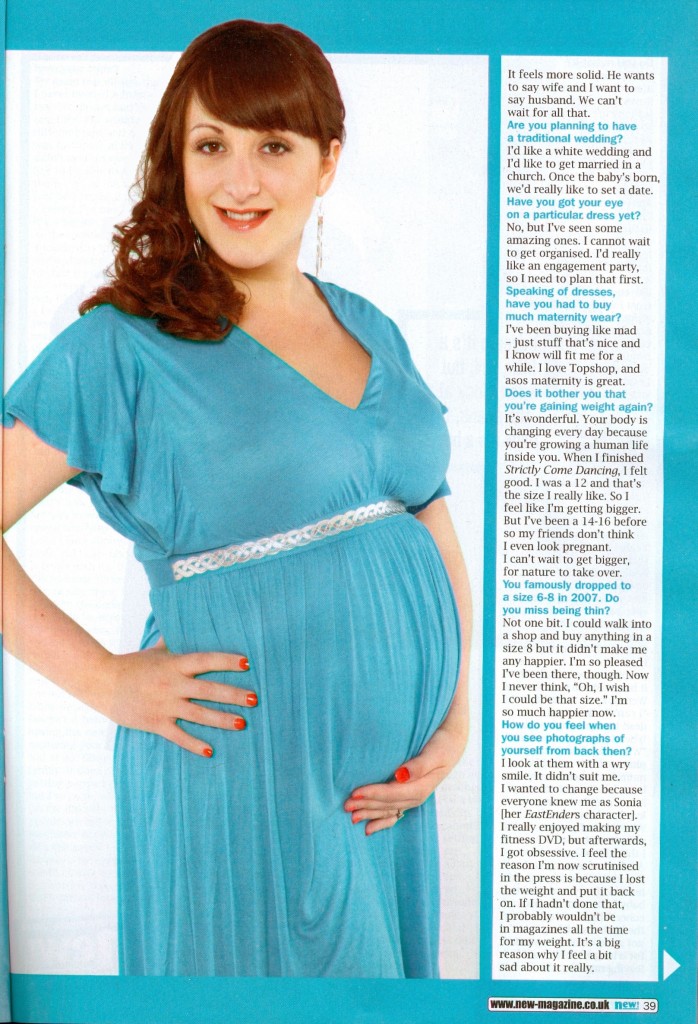 E4 (channel 4) was there to film again and it only just dawned on me that they would be at all of the shoots as they were following Natalie around for the coming weeks ahead. The cameraman Pete is a really nice guy and also very good at his job (his so unobtrusive). Pete asked if he could have an interview with me, of course I said yes and spend around 15 minutes asking me lots of questions, mainly about Natalie, for instance, how I met her and what it was like working with her etc.

Check out the photo bellow, notice how slim Natalie is in this shot and also how straight she normally wears her hair.  This was the last page (with credits) of the spread. 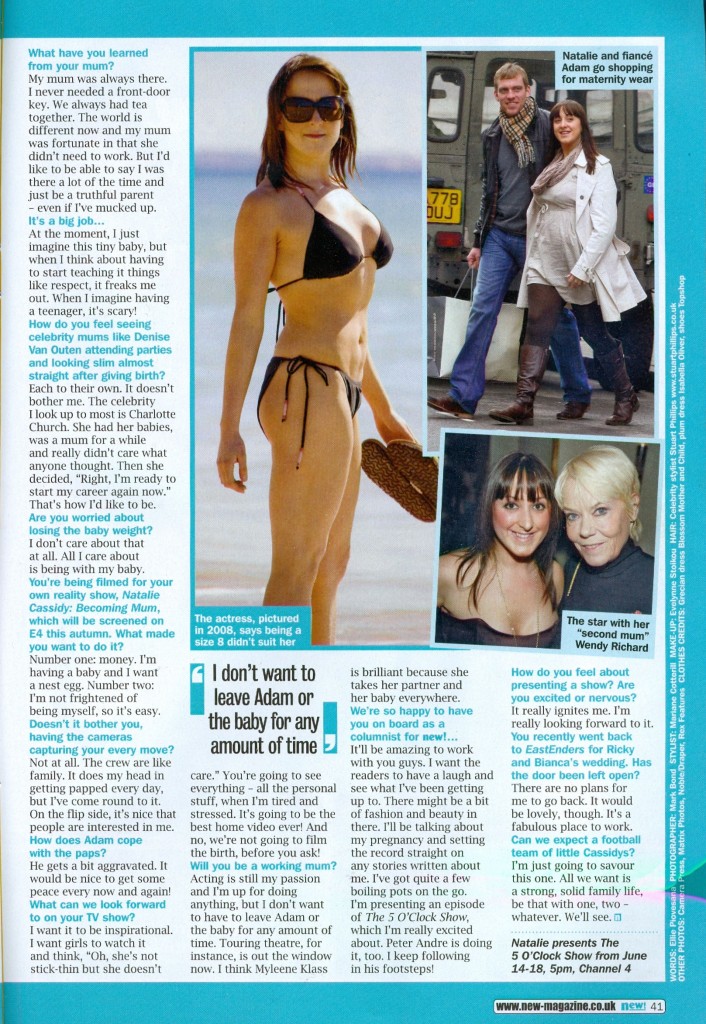 The day went fairly quick I was finished by 3pm, I then went back to my salon for a few haircuts, and I then met my lovely friend Annika and went to the Covent Garden hotel for a drink, spoke a little business then just relaxed and drank a cocktail with her.

The next morning at 10am I arrived in Old Street for my third photo shoot for Natalie, this time it wasn’t for a magazine but for the British Heart foundation.

All I had to produce was one look (much simpler this time) and the photo would be sent to all the various press as it was advertising the charity, the reason behind Natalie getting involved was her mother passed away about eight years ago with a heart attack, so I can understand why she gets involved with this charity.

Rather than using heated rollers I used the hot irons and produced a very soft but large spring curl, the curl was so nice that Natalie wanted to wear her hair down.

While I was styling Natalie’s hair E4 TV was there filming once again, this time it felt natural being filmed by them as I now felt very much part of the documentary. At one part of the filming Natalie invited me and a guest to her engagement party; I was taken back but delighted.

The shoot finished very early because there was only that one look to create, Before I left I was introduced to the head of Channel 4’s press, he spoke to the make-up artist and me, he was explaining that he wants to build more of a presence of us guys in the reality show (so basically the public will get to know us a lot more) this was great to hear.

I give you one guess where I went to next, you got it back to the salon.