The Miss University competition 2010 is now over and boy was it a crazy night!!

On the 16th March my day started as usual. I cut and styled eight of my regular clients at my Covent Garden salon and then at 6pm my team and I (including one of my apprentices Karan AKA Marley) packed all our hair equipment, jumped in a taxi and headed down to the legendry night club Movida.

When we arrived the twelve finalists were busy rehearsing. While this was going on my crew and I started setting up the hair equipment ready for my team and I to work our magic. It was an absolute stroke of luck that part of the design at Movida was three large and very fabulous mirrors already on the wall. We set the tables up in front of the mirrors to try and simulate a salon and within ten minutes the organiser found three stools. What a great start, so far everything was going to plan.

The head make-up artist Natasha and her crew were already there, set up and ready to go. For the next hour we all chilled and waited patiently for the girls to finish their rehearsals.

Scott who was there to film behind the scenes and the competition arrived at 7pm. Some of the footage will be added to my already filmed documentary called Stuart’s World. This was filmed last year and since then the production company decided to film some more. Here’s the link to the original three minute trailer of Stuart’s World.

(The footage doesn’t include the filming of Miss University, but will be added at a later date).

At around 7.30pm the girls had finished rehearsing.  Christina and Tara went to meet their models and bring them back to our little hairdressing area and then so did I, this is when all the fun of creating our styles began. The styles consisted of a combination of some hair up, some down, either with a quiff or some height near the crown.

It was a fairly difficult situation because after the first couple of hours the doors to the club opened and in poured the people.  The noise level became really loud and this made it difficult to concentrate. There were quite a few people starting to hang out back stage making it even more difficult but we just soldiered on and by 12am we had all finished styling the twelve finalists and three presenters. It took around four and a half hours to finish all hair and make-up.

At around 12.30am the competition started. It was very difficult for the girls because firstly,  it was very overcrowded and they only had a small space to walk and secondly, the noise levels were really high that when the girls spoke (even using a microphone) it was hard to hear everything they said. Luckily, I was standing only a few feet away from them as a judge but I’m talking about the people standing further back.

All the girls were really nice,  this made it a hard decision to make, but as a judge I had to choose first and second place with my other two fellow judges, It was difficult to place first and second but we had to come to a decision fairly quickly as the audience were keen to find out.

I personally gave Stephanie and Michaela equal first place as both the girls were lovely and I suppose if I could have chosen two winners then they would have been the ideal two.

The other two judges also placed Michaela and Stephanie as the top two, so I left it up to them to make the decision and they chose Michaela as first place.

I’ve attached some photos of the evening in progress, unfortunately some of the photos came out a little dark as the lighting wasn’t very good and also I only have a selected few girls this was because it got so hectic that it was awkward to keep snapping away. Next fashion show I’ll try and get some photos of my team working (if they let me as some are a little camera shy) as I would like to show off their great talents as well. 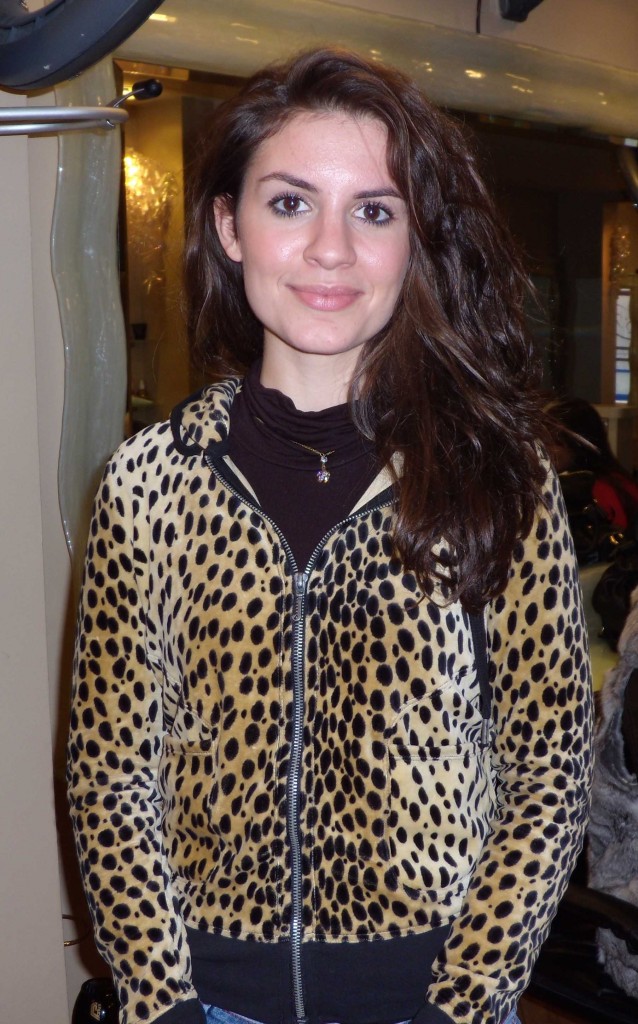 The photo above was taken a few days before the competition, this is the first time that I met the finalists. 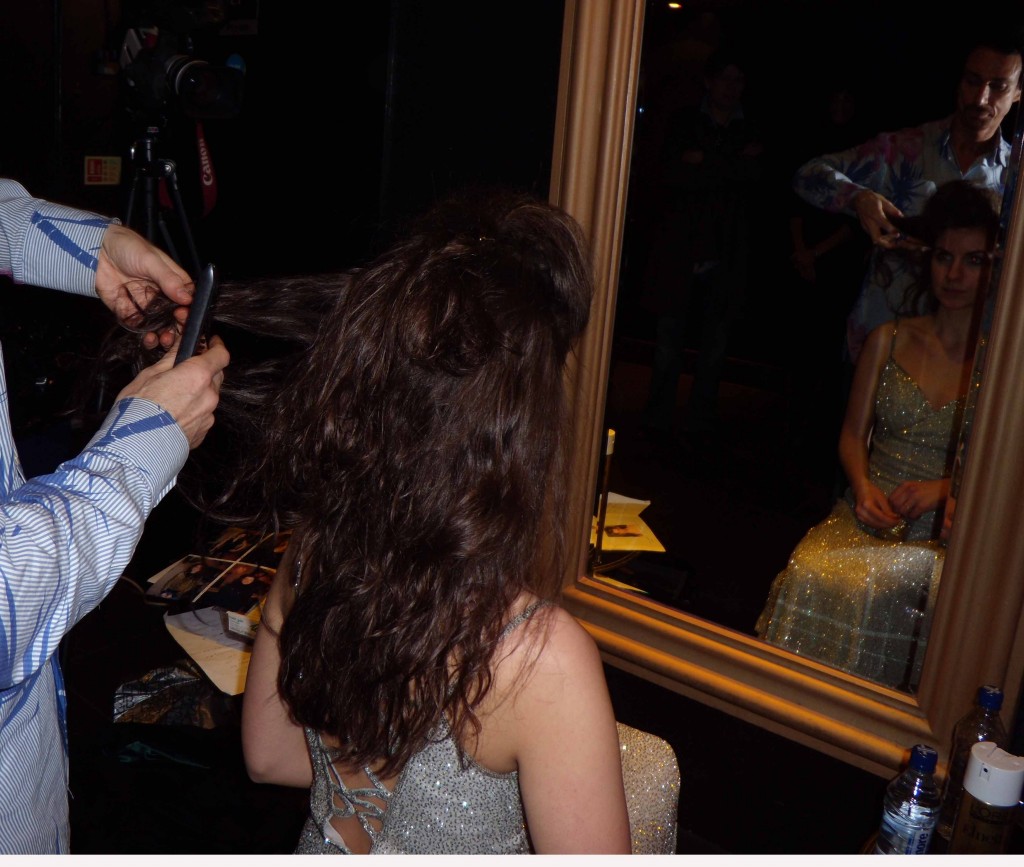 The quiff is now backcombed in, next thing was to take small pieces of hair from next to the quiff and pull them back blending it in and extending on the quiff. 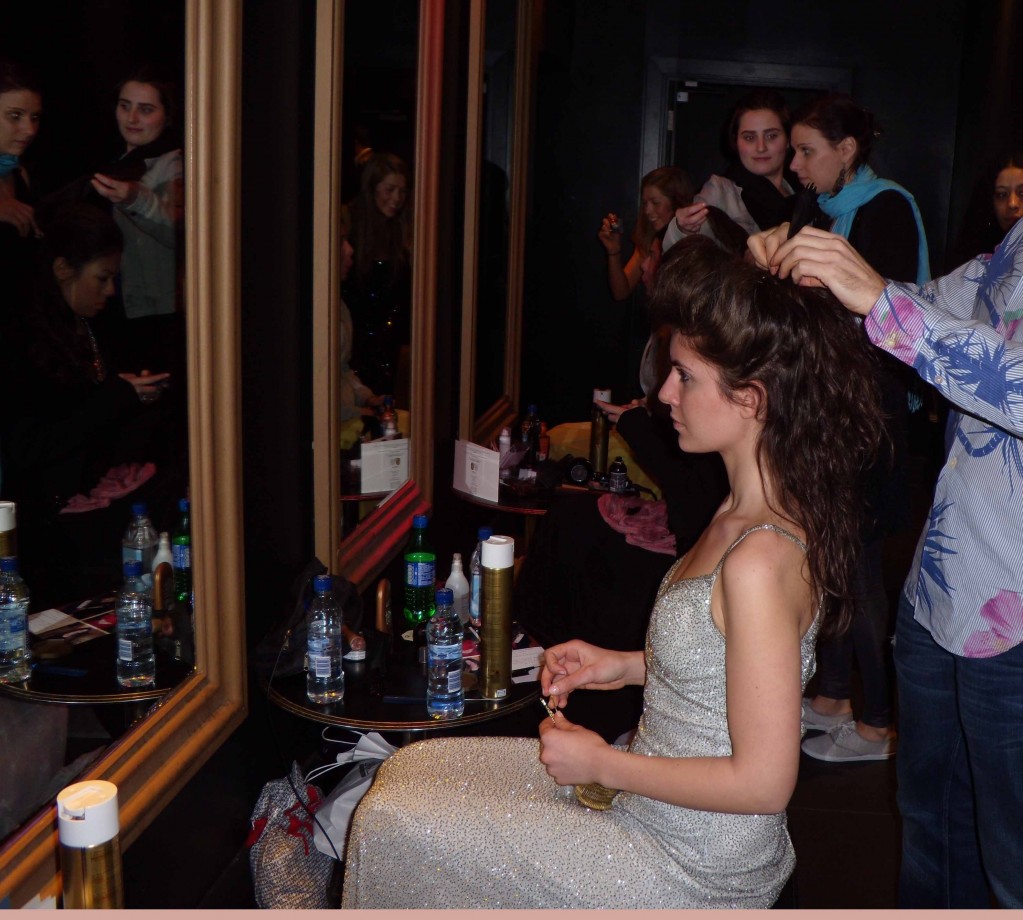 You can now see the shape from the side, I decided to leave the rest of her hair down, next was to style the back of the hair using tongs, this was because I wanted to achieve softer and bigger curls. You can see Christina working away next to me. 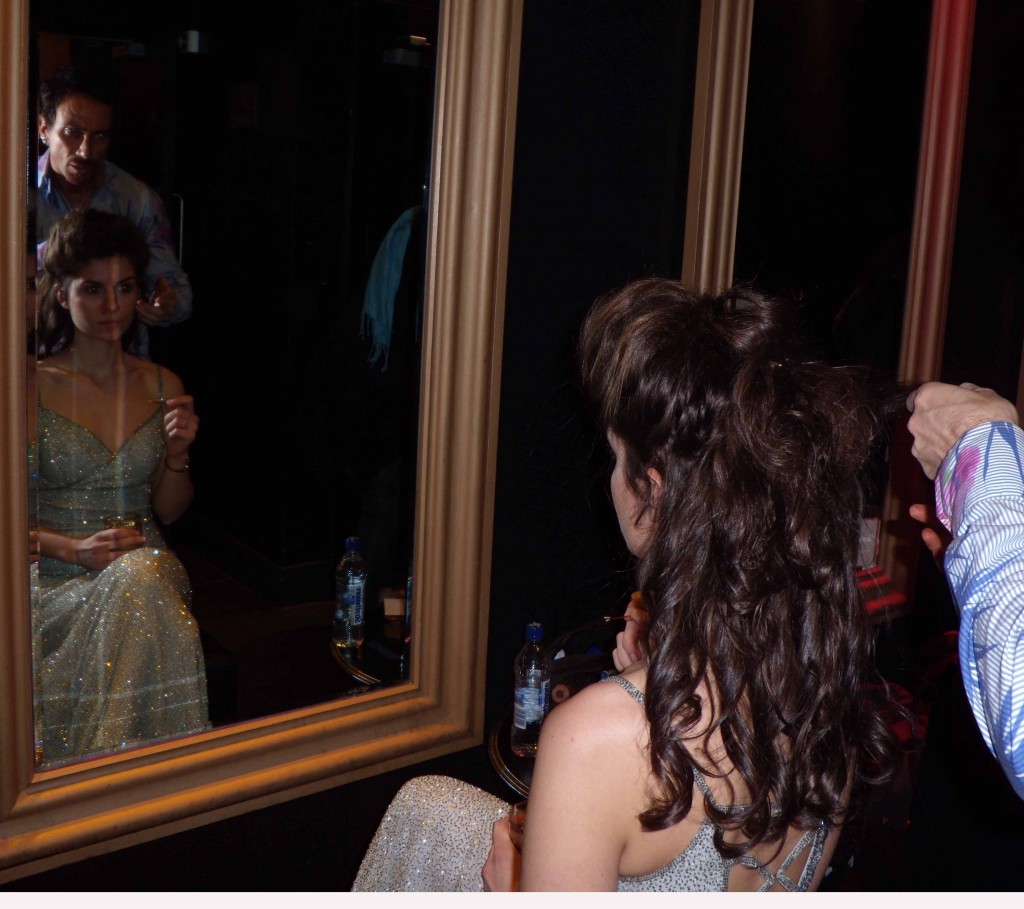 Starting to build up shape on the crown by creating a large pin curl, this is also beneficial in hiding the grips that have been placed on the crown area. 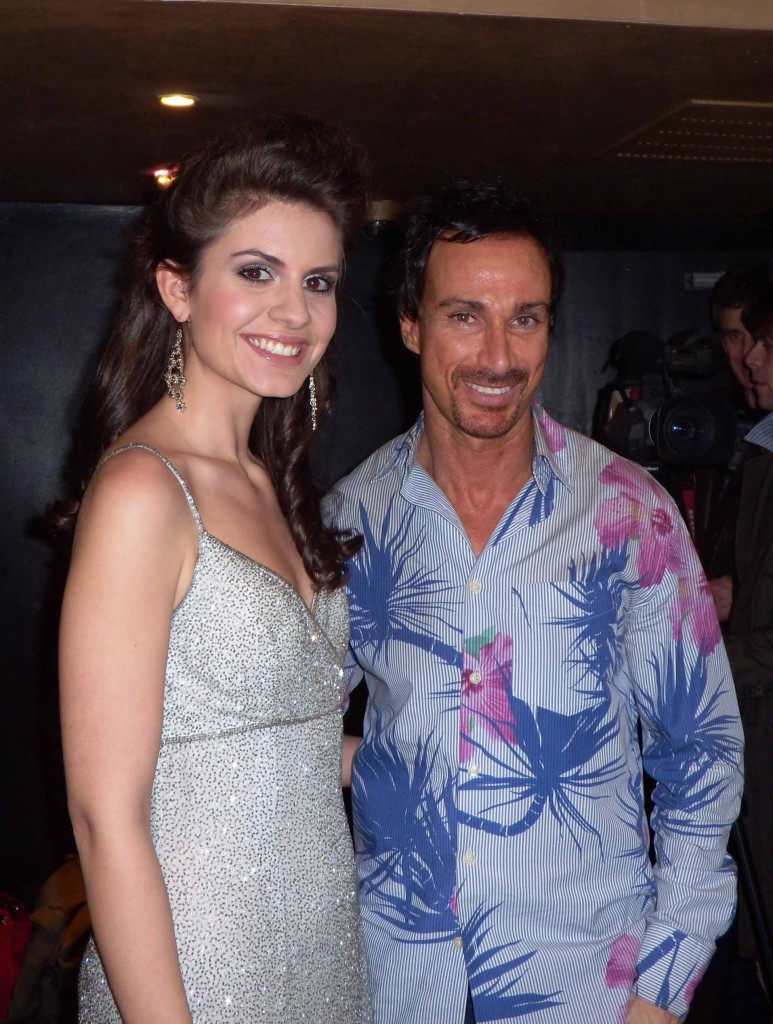 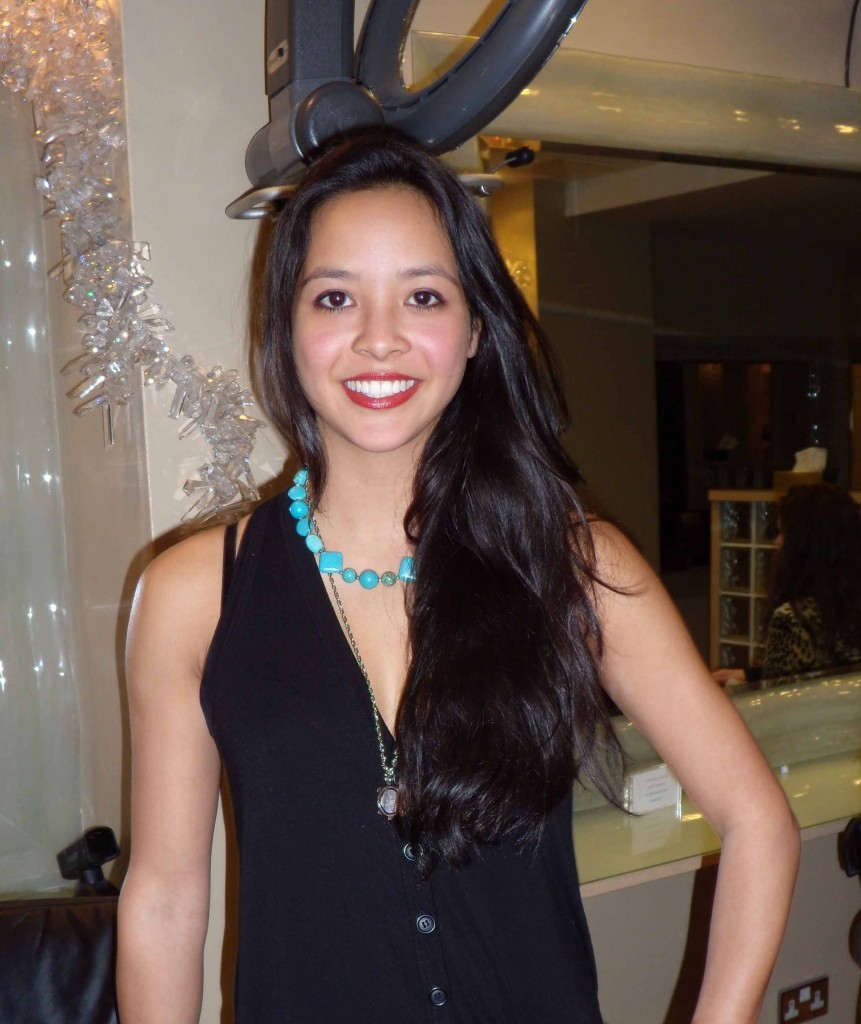 Before shot in the salon. 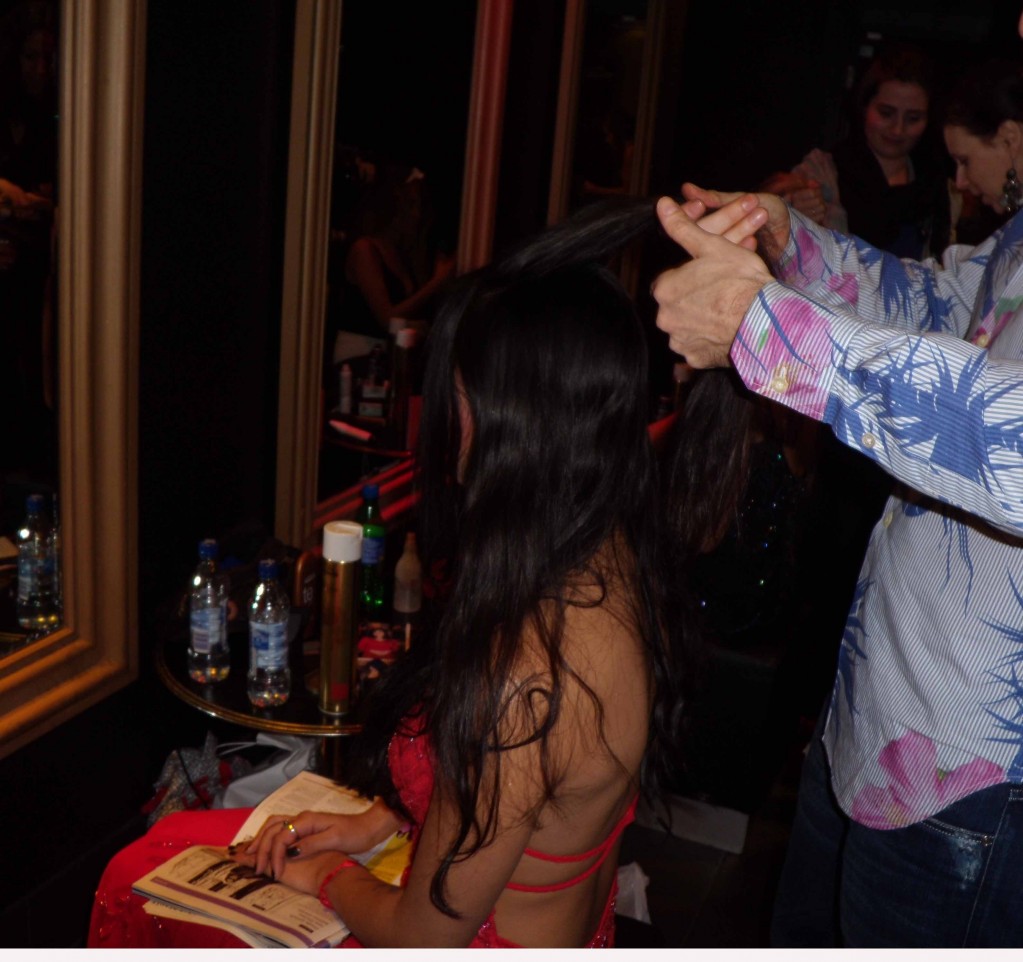 From this photo you can see how fine and straight the texture of the hair was, it was also very clean, this makes it a little tougher to work with, to help combat this I sprayed some normal hold Elnett hair spray, this was to make the hair a little grittier making it easier to work with. 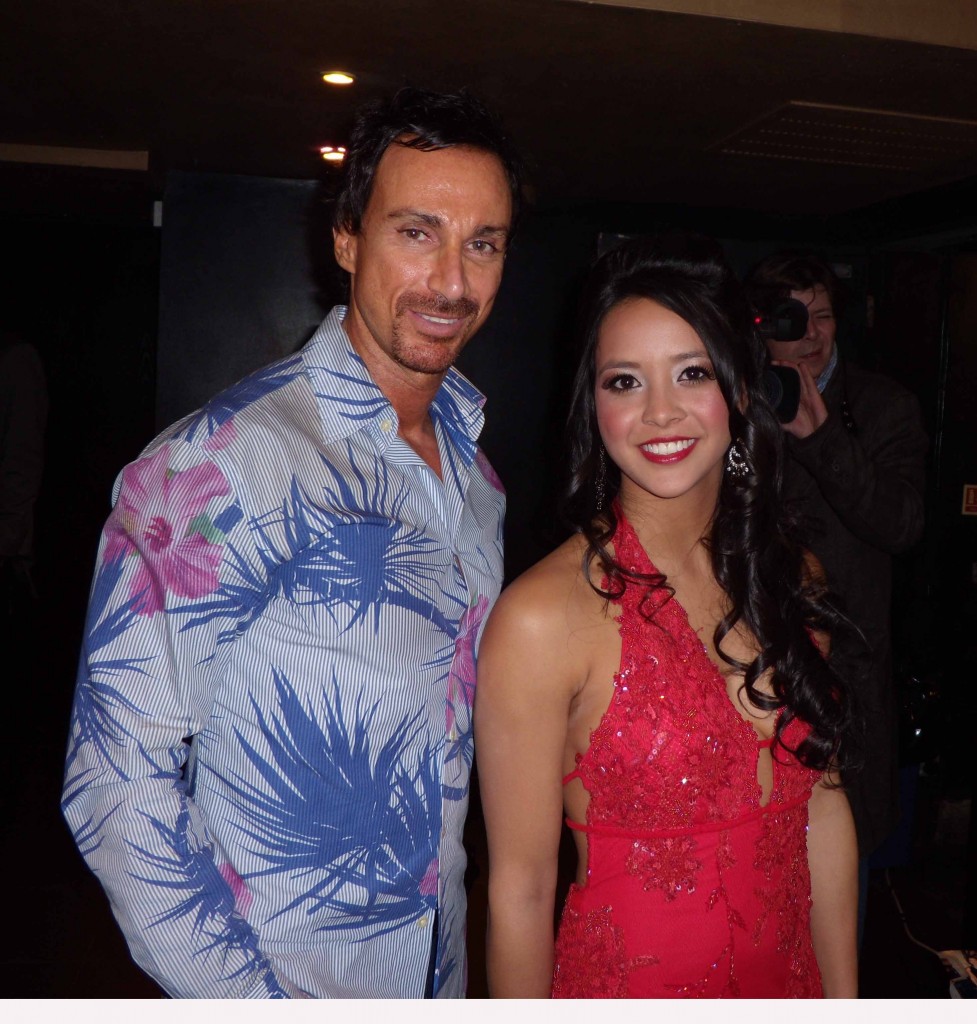 from the photo above I have backcombed in a quiff but left some of the fringe hanging down, this was because I wanted to create softness around Fiona’s face as the shape of her forehead was a little square and I wanted to give the illusion of a smaller forehead. I used the largest sized tongs to create the big curls, if you decided to use large Velcro rollers instead the problem is the curl will not last as long. By the way that’s Scott filming behind me. 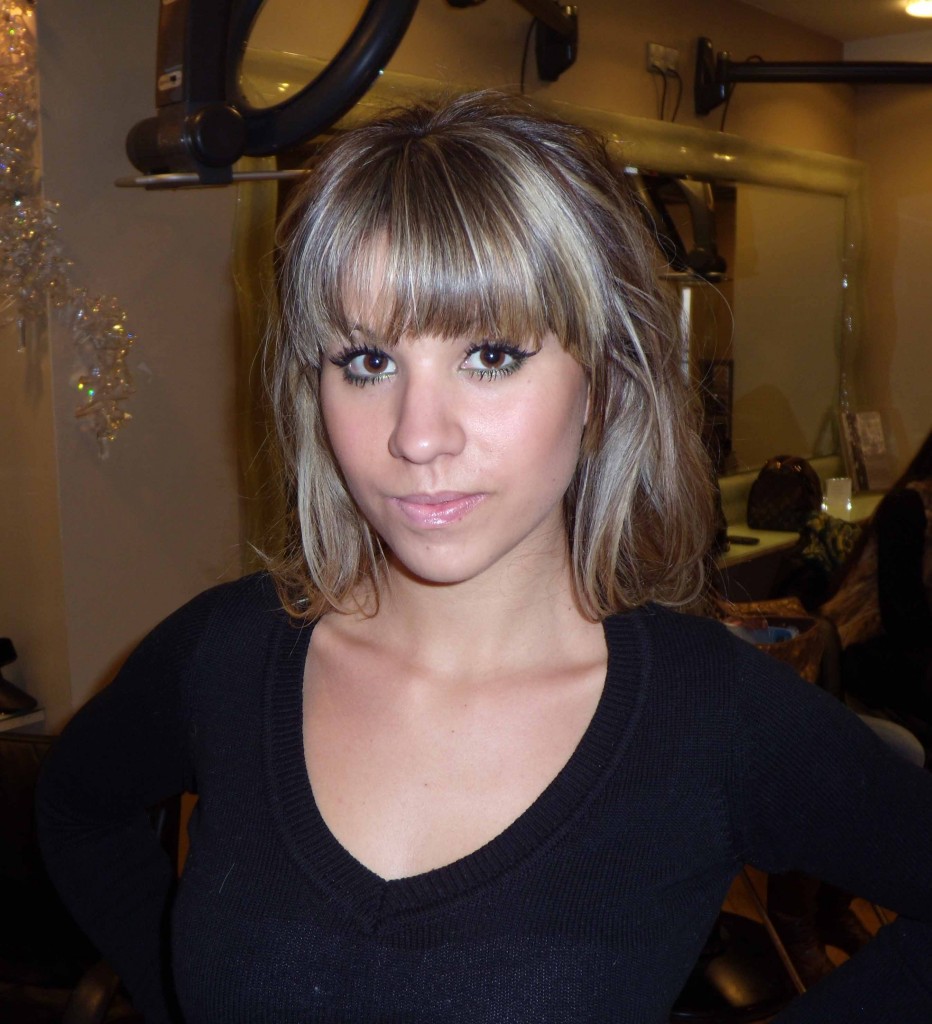 This photo of  Stephanie was taken in the salon. 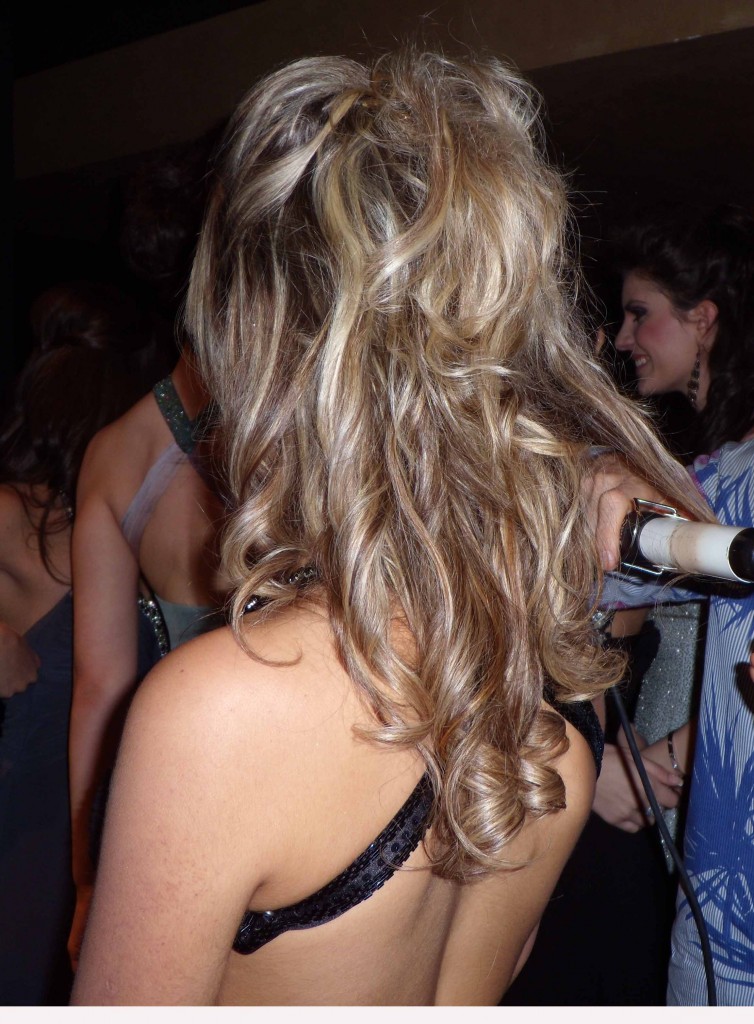 Stephanie had a short fringe so a quiff was out of the question, after talking with her she prefered to keep her hair down which I agreed, it seemed to look more beautiful on her face. I created a little height on her crown by twisting small sections of hair and gripping it back towards the crown, I used her own lovely texture and a little help from the tongs to achieve that natural looking curl. You can see how busy it was with people and models everywhere. 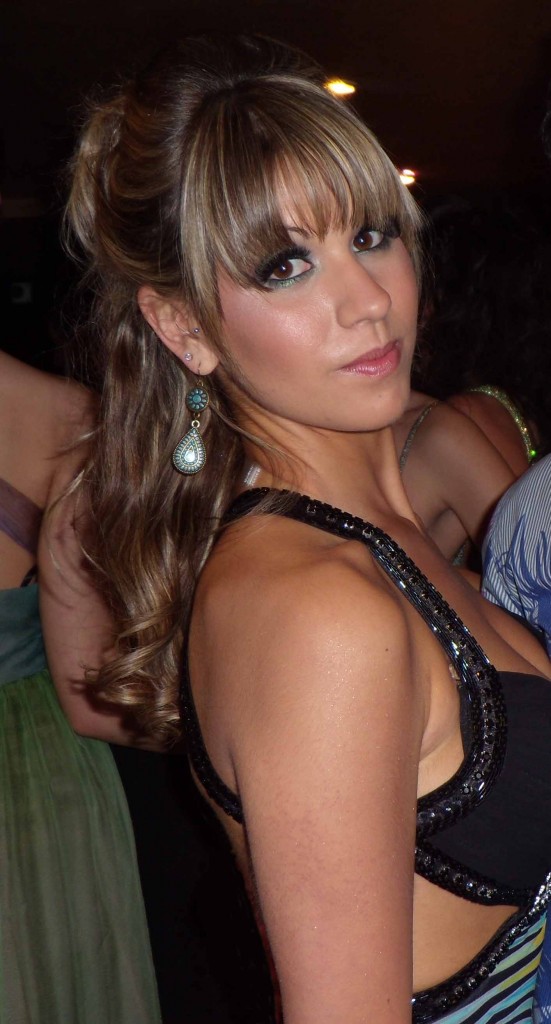 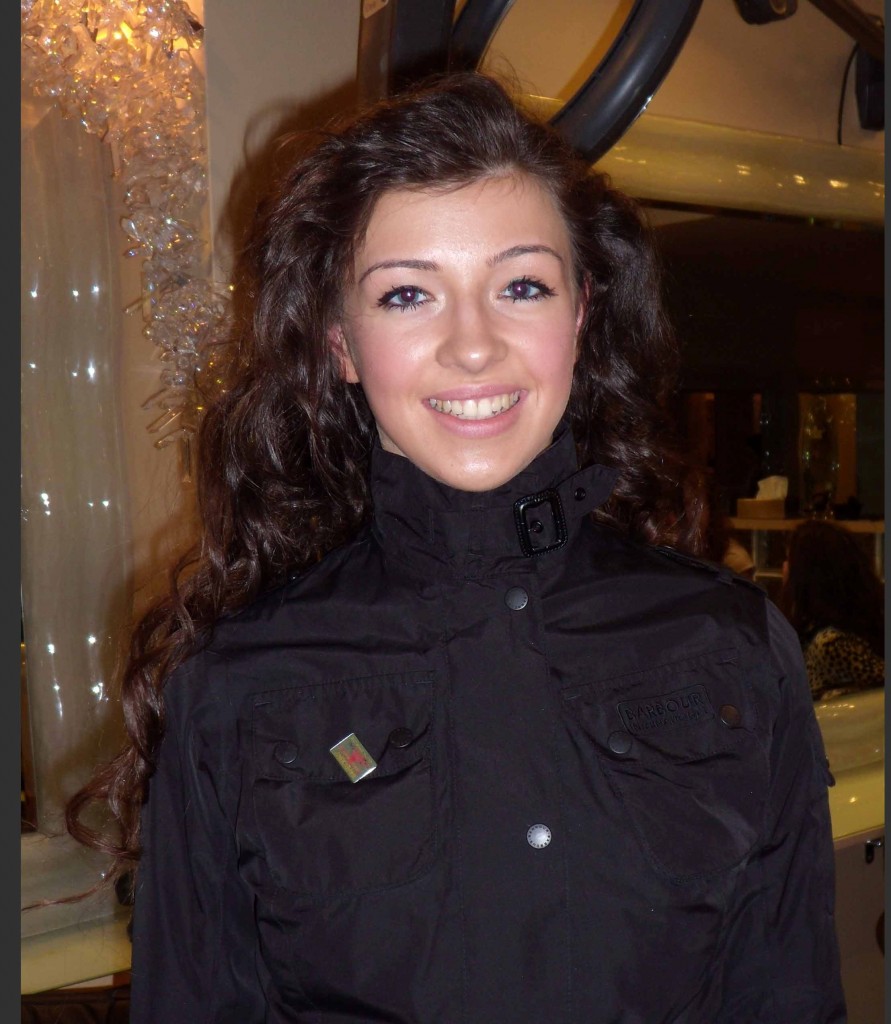 Before shot of Michaela in the salon. 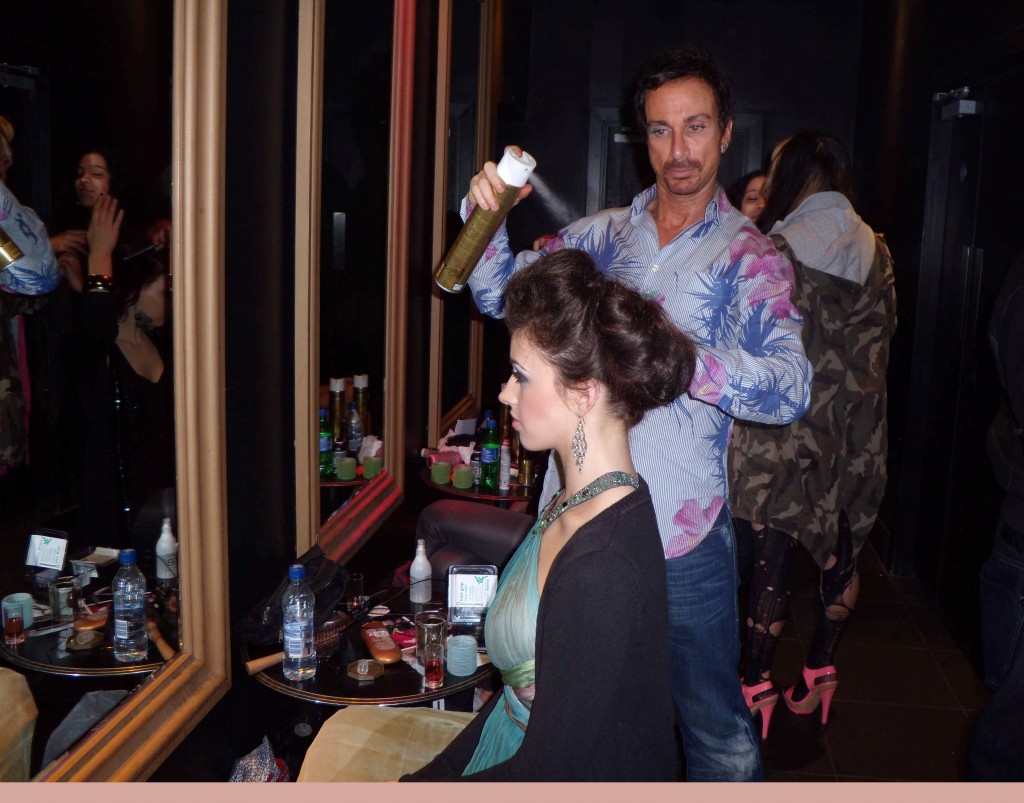 From long to short in forty minutes. A lot of detail has gone into creating this style. 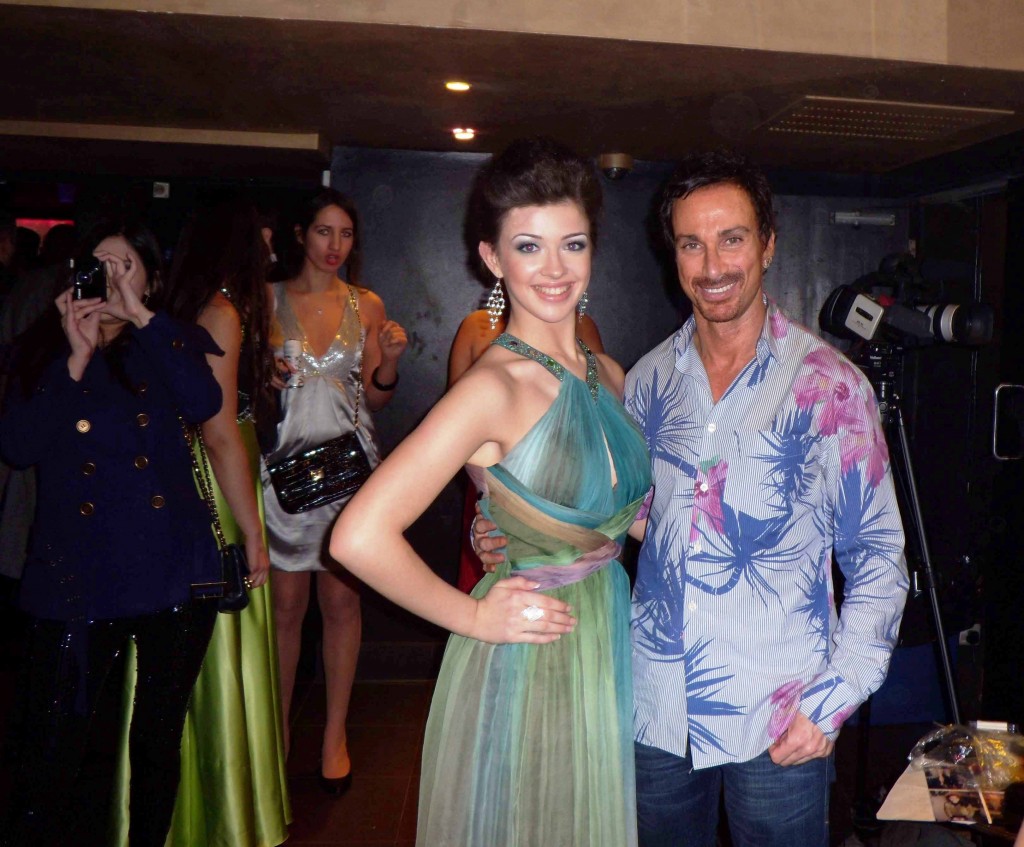 The Finished look. In keeping with the theme (even though Michaela’s hair was put up) I still wanted to create a sense of height. You can see much more detail from her profile shot (second photo above).