About Six weeks ago a journalist friend of mine (who happens to know someone at the Guinness Book of Records) filled in an application form on my behalf. This was so I could enter a new category for the highest haircut (which I spoke about a couple of blogs ago). Since then I have not heard back and my friend is so busy that I thought I would try and contact them myself – unfortunately their phones just ring.

On the 13th February I received an email from them (totally coincidental)  and they asked me for some video footage and photographs (they wanted to include my record from the Guinness Book for the most expensive haircut)  to go on the iPad as a Guinness Book application. I suppose that’s a good enough excuses now to buy an iPad! 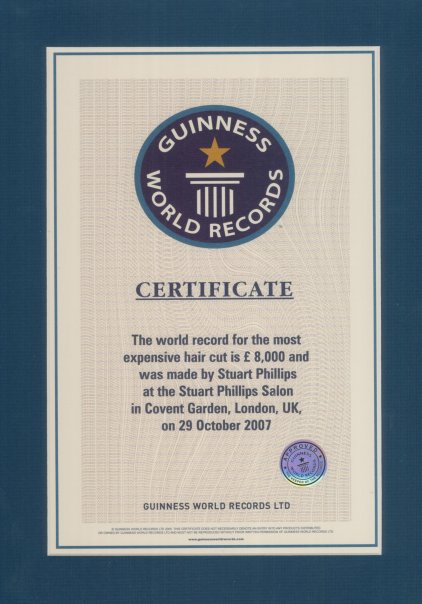 While I was on the phone to the picture editor I thought I might as well ask about my application regarding my world record attempt. He said he would look into it for me, hopefully I should know in the next few days!!

A couple of weeks ago one of my fashion contacts, Alan Endfield, asked me as a favour if I would style the hair for some models at his fashion show. I asked Alan what the payment would be and he replied “well, mmmm, there pretty girls and it will be for a Christian Audigier Lingerie show, let me think now!!”.  Two seconds later, “ok”, was as simple as that! Alan said that I would only need to style the hair for three of his top models, so that wasn’t too bad.

I invited my agent Justin as moral support and the fact that there was going to be a lot of half naked beautiful girls running around, I thought he would appreciate that.

I styled the hair in the VIP area of the club and Justin sat on a big sofa sipping away at some complimentary Champagne and of course watch the maestro at work, that’s me by the way!

When I had finished styling the Four models I was about to pack my hairdressing bag then more girls came to me and asked If I could style their hair, it just felt so wrong saying no.

The party started at 11pm, it was very good, at around 2am I met two lovely girls Bambi and Peeks, they’re from a production and modelling company called Tommy Girlz, they asked if they could interview me for Christian Audigier, so I agreed.

I left the party around 3am even though it was still very much alive,  partying on a Friday night for a hairdresser is bad as Saturday’s are normally the busiest days of the week.