I was asked by my agent if I wanted to style some hair for one of the London Fashion week shows, (this particular show was organized by Kaja for the Button club) I don’t normally style hair at fashion shows as you receive very little PR and generally you don’t get paid for doing them, so you can understand why I didn’t want to get involved, unless of course you did it for the experience and that’s something that I don’t need.

On this occasion I accepted to help because Eli, who is a good friend of mine and one of the directors of Katch PR, is a well connected lady and if she asks me to do something then I generally accept. It’s also good for my salon team to work together, its fun and breaks up their normal routine.

I asked five of my top stylist’s to help me at this event, they’re all very good at what they do, my team consisted of Christina Avizienyte, Tristan Eves, Lara Clark, Caron-Ann and of course myself.

Angel wanted all the 8 male models to be styled with a side parting, slicked back with gel and then blow-dried, (not the Grecian look) that was fairly simple but highly affective, Shahzad originally wanted all the 8 female models to have a loose ponytail and wrapped into a bun with pieces of hair pulled out and then back-combed but at the last minute asked for the hair to be worn down (with a messy bed head look), which was a shame as the first idea would have been a lot better, after speaking to Shahzad and explaining this, he then agreed and said to please go ahead as originally planned, hearing that was music to my ears.

My team and I arrived at 3pm, the first stylist to start was Tristan, he looked after the majority of the male models, then with-in 20 minutes or so the rest of us started working on our models. 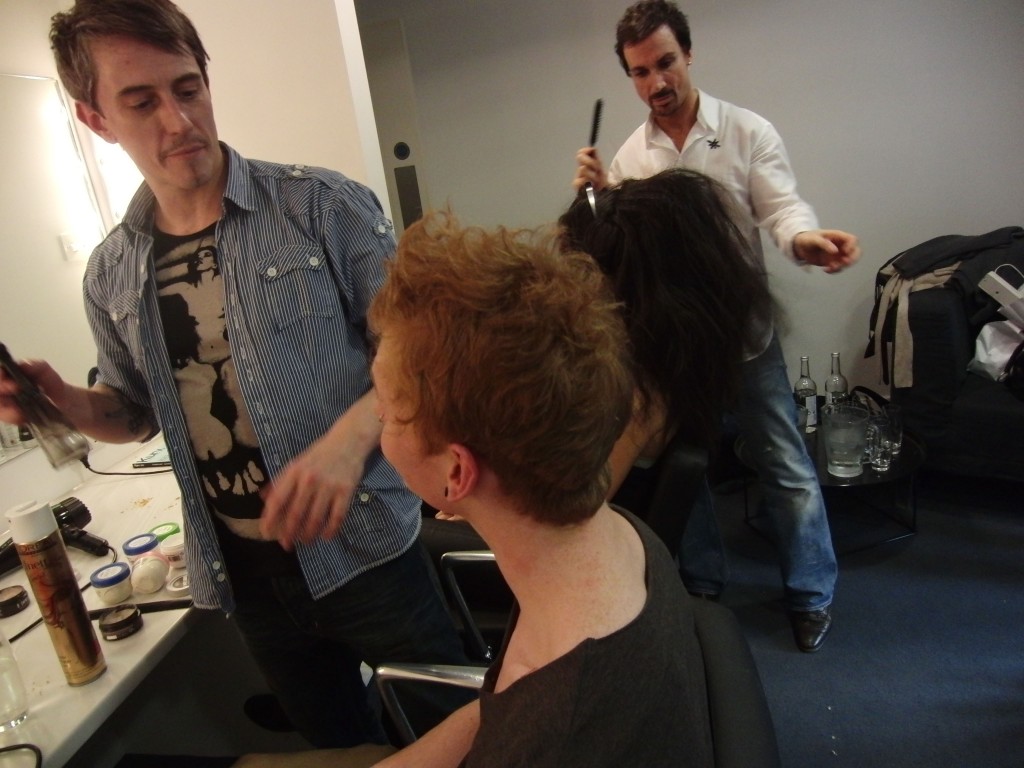 Tristan looking at the amount of hair just before he starts to sleek the hair back.

Just like magic (and a bit of elbow grease) Tristan styles the models hair, as you can see he let’s the wave come through rather than squashing it into place. 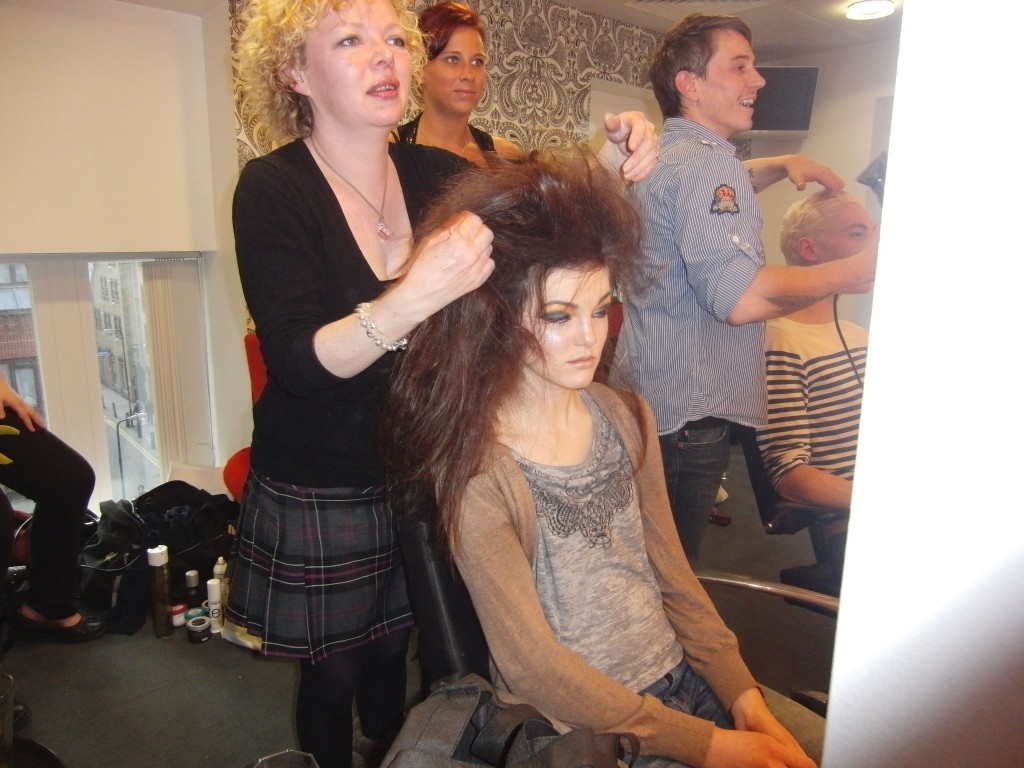 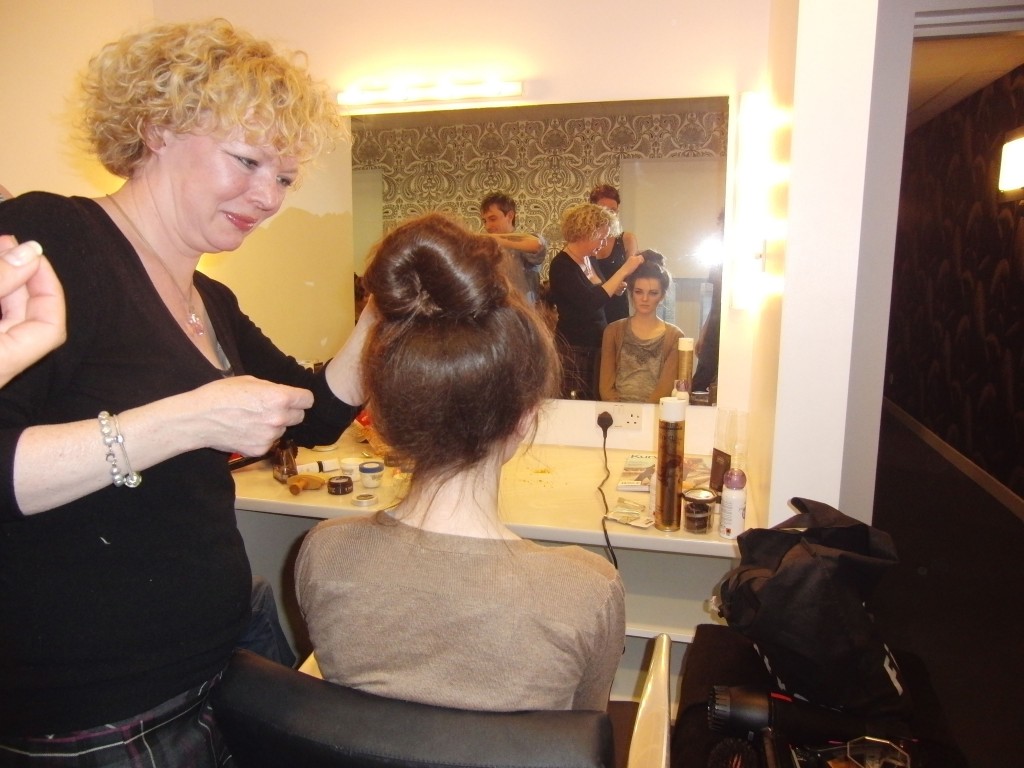 She has now gently brushed the hair up into a high ponytail and wrapped around into a bun, finally pulling out pieces of hair for the desired look. Looks great!! 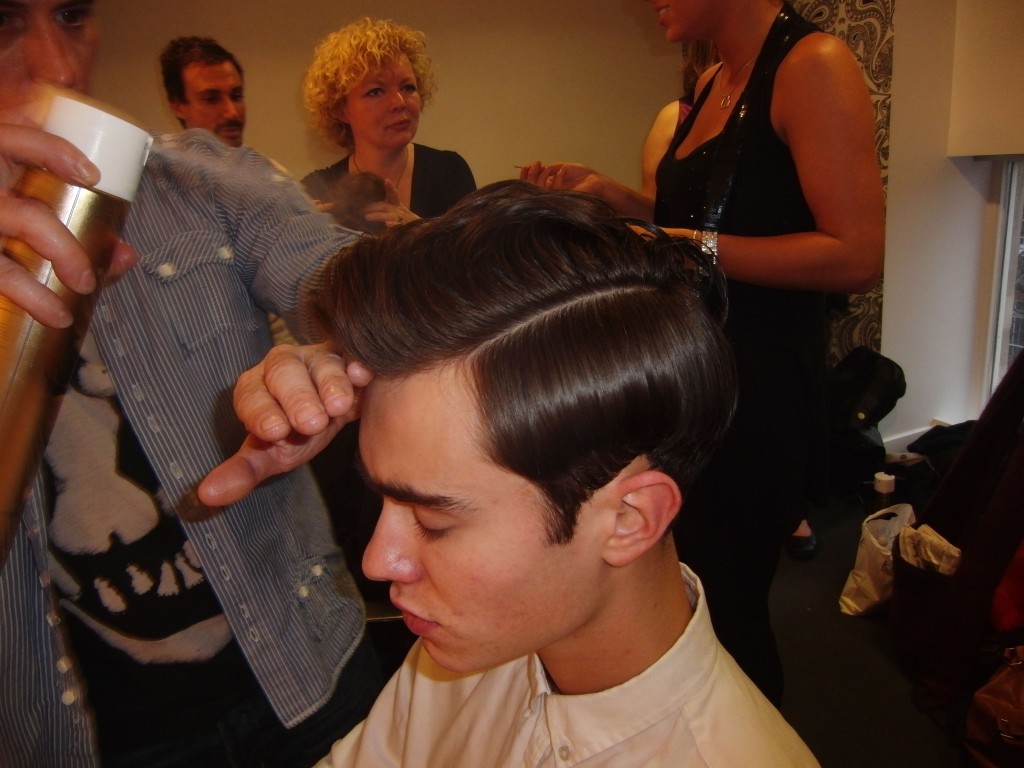 Back to Tristan, look at that perfect parting! 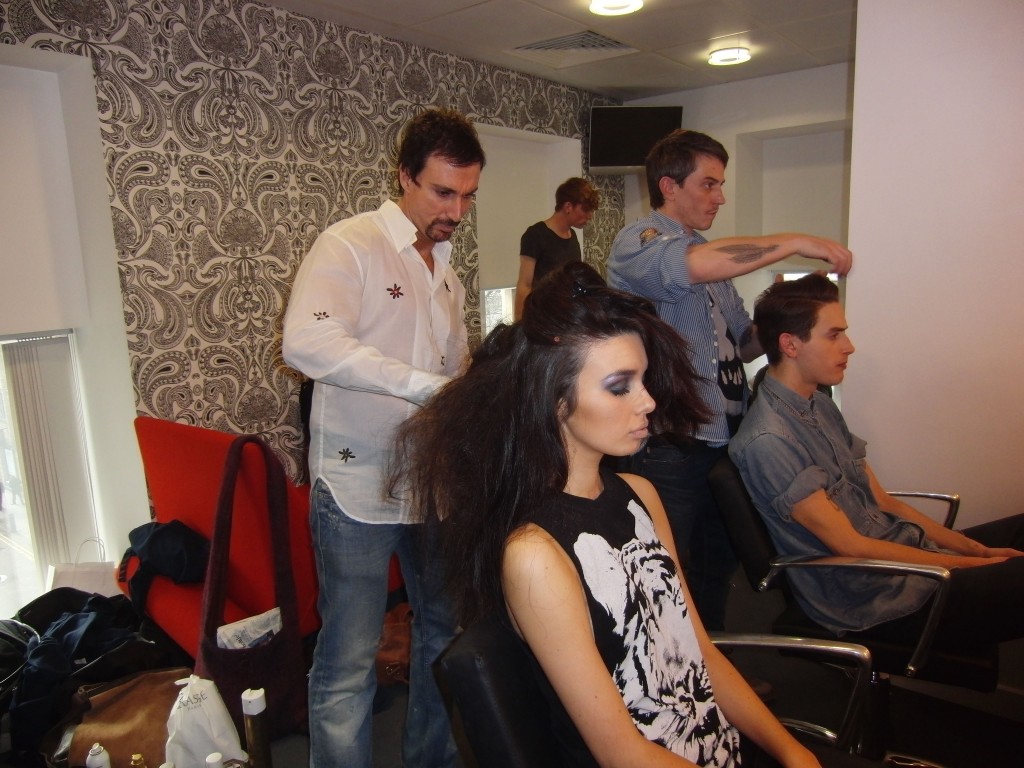 Mr Phillips is looking at the amount of hair and thinking how’s all that going to go up! 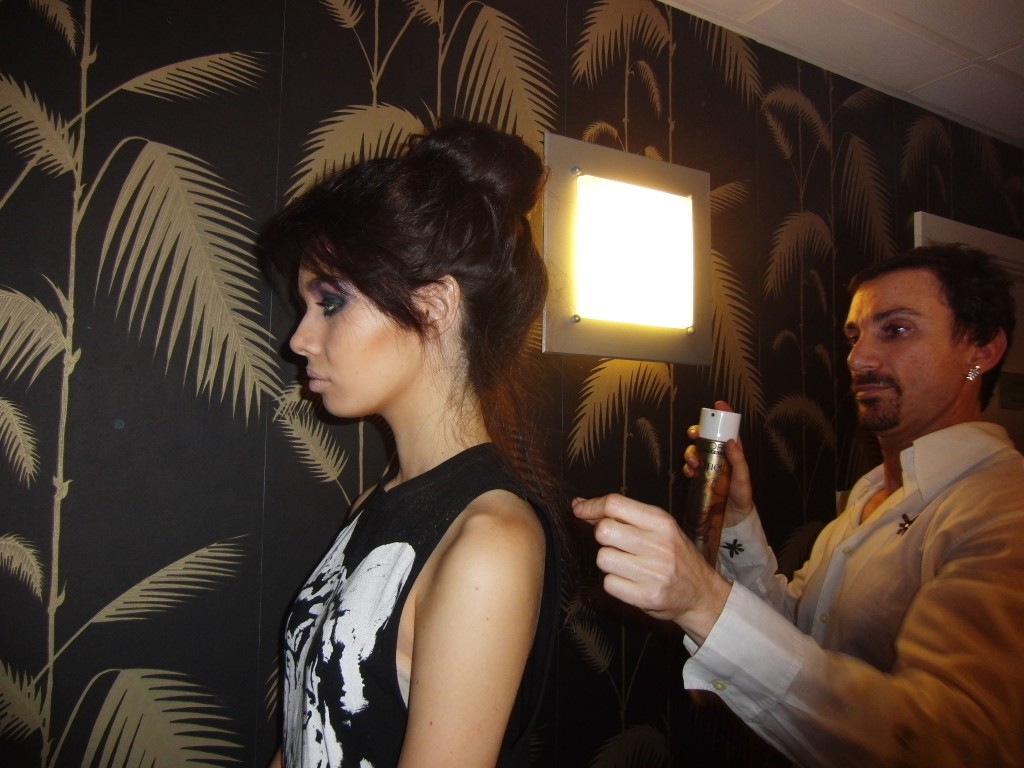 Here we go, all the hair is up, finishing off by pulling a few bits of hair out and spraying with the old faithful Elnet. 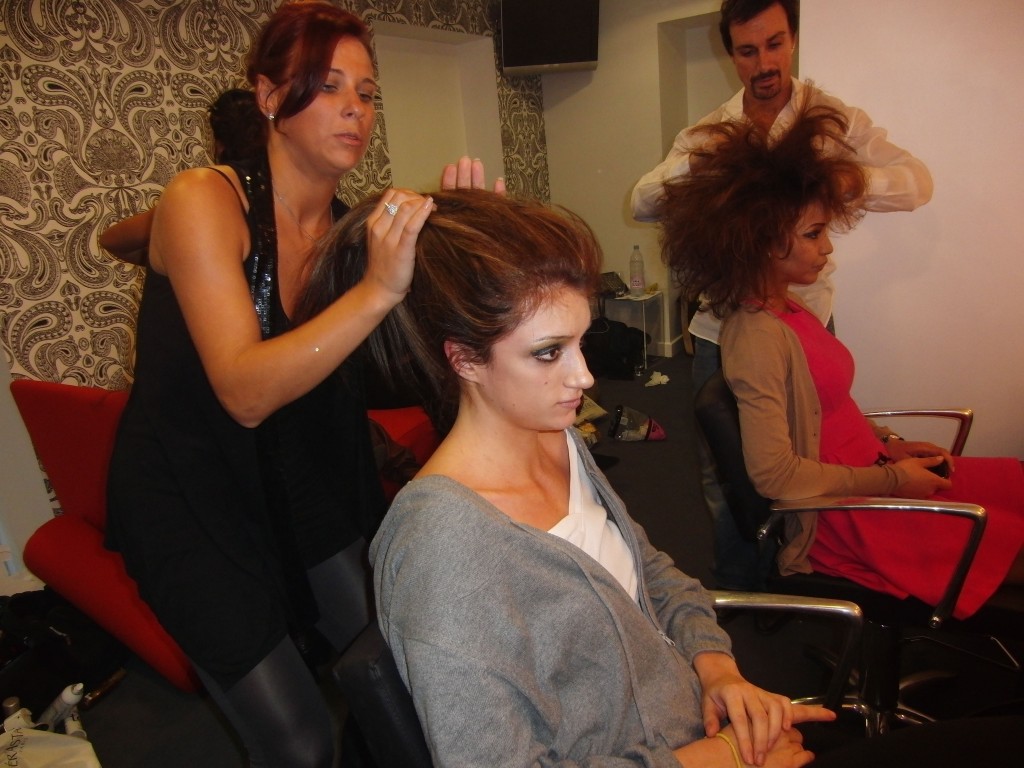 Christina concentrating on the job at hand! 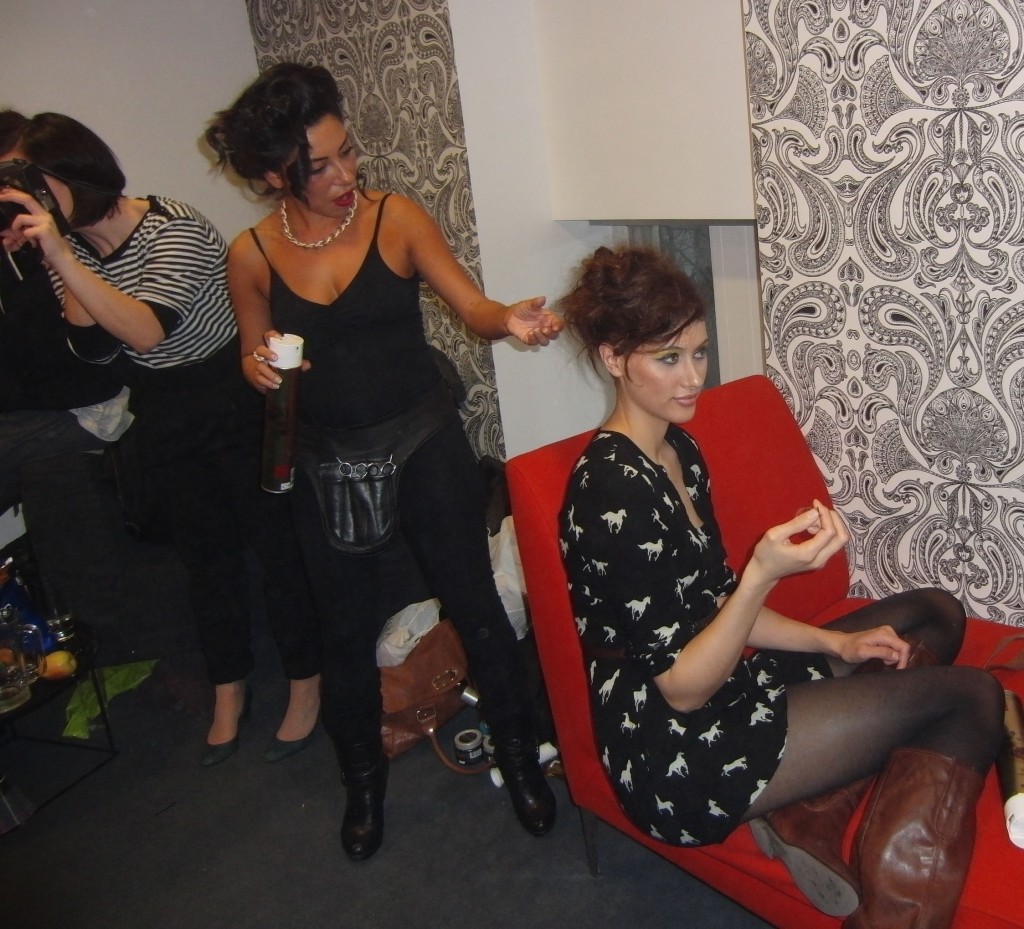 Lara’s almost finished with her model. 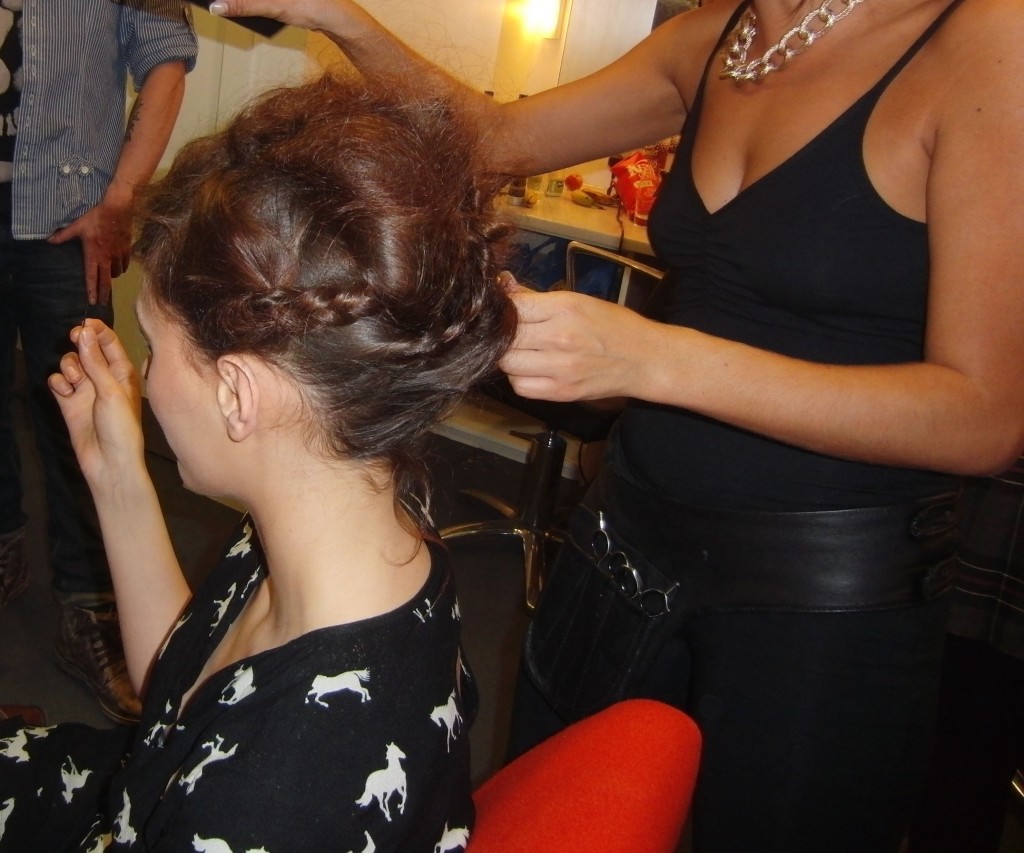 A close up of Lara’s hair art.

There was going to be two shows the first at 6.30pm and that was for the members of the Hospital club (the venue for the show) and the second was planned for 8.30pm.

My team and I managed to finish all the 16 models by 6pm so we had 30 minutes to wait before the first show would start. I managed to sit on the front row where I could watch because then I would get to see our work up close & personnel and if any changes were needed my team and I could do that straight after the show, reason being; the next show was slightly more important as potential buyers, Celeb faces, and industry people would be present, as it happens there were no changes needed, except a bit of tweaking here and there.

At 7.45pm I waiting with my team in the hair room ready to re-spray all the models hair and make sure no more grips were needed etc.

At 8pm Janice Dickinson arrived, “fashionably late may I say” and as expected I was to style her hair, (which I love doing) first the make-up artist applied the make-up, she took an impressive 20 minutes, (which is quite fast) then I was next. I have a great friendship with Janice which makes my job even easier, although having said that I only had about ten minutes to style her hair as Janice was needed to be sitting in the audience by 8.30pm; so I was hoping that she would like my ten minutes of styling. I did the best I could in the time I had, basically I added a little more curl, lucky for me she liked what I did!

I then caught the lift downstairs with Janice, Eli and Georgie (Georgie is the other director of Katch PR), as we stepped out the lift I noticed how packed it was, (much busier than the first show) I then asked Janice where are we going to sit, she replied don’t you worry and grabbed my hand, we then walked together down the middle of the catwalk, posing for a few OK! Magazine photos etc, then as we went to sit down realized there’s nowhere to sit! Janice then gave a hard stare at a few of the girls that was sitting in what we felt were our seats, lol and then with-in the next few seconds the two girls stood up and said please sit here Janice, Janice then pulled me down tightly next to her, which I didn’t complain about!

Bellow are some of the shots captured on the catwalk. 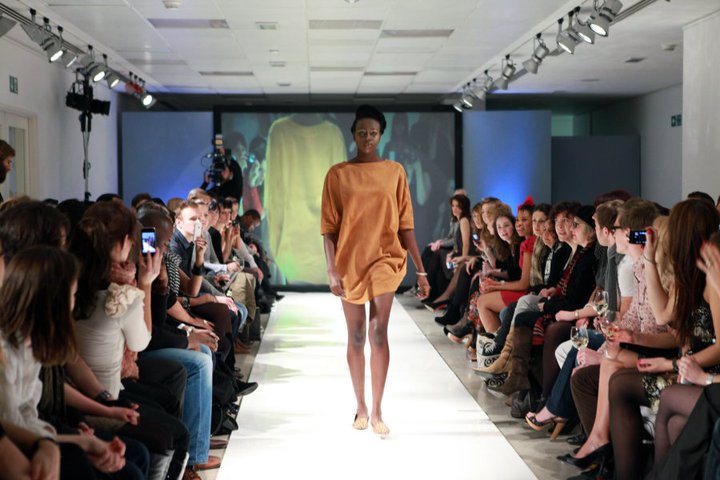 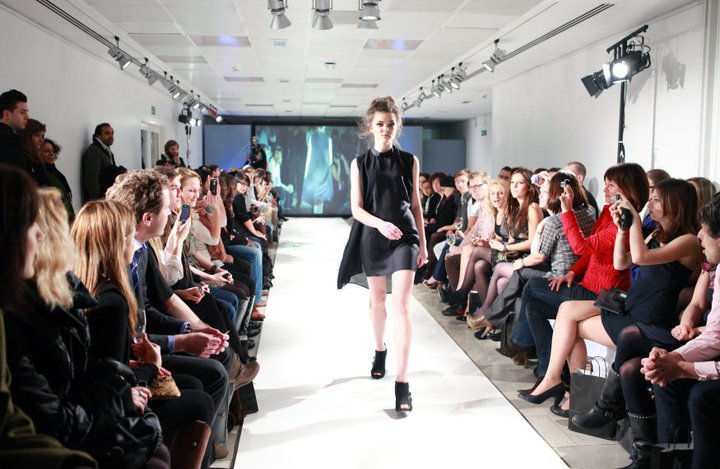 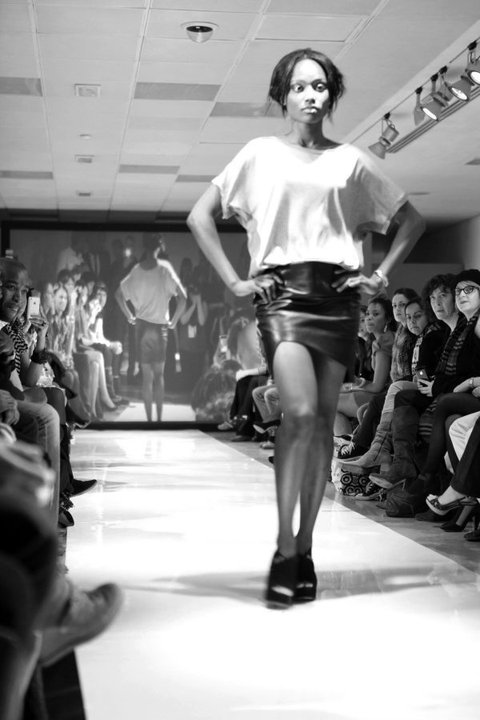 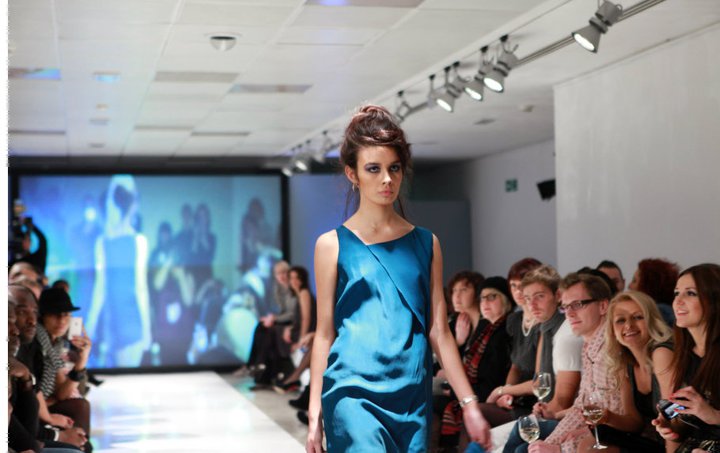 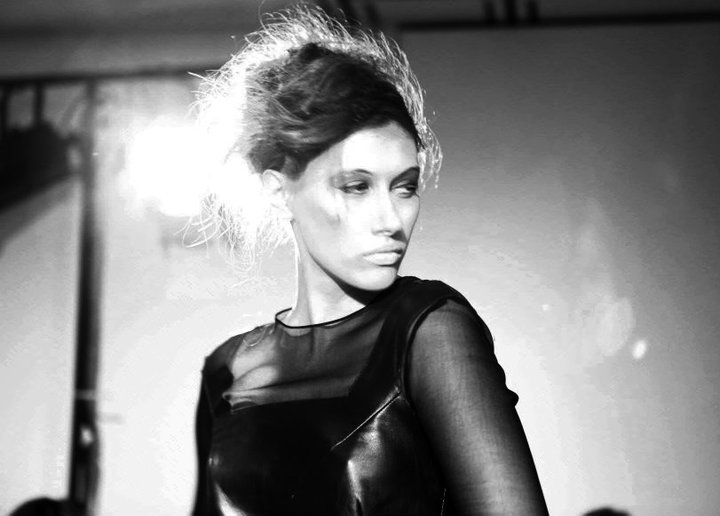 Best shot on the catwalk 🙂 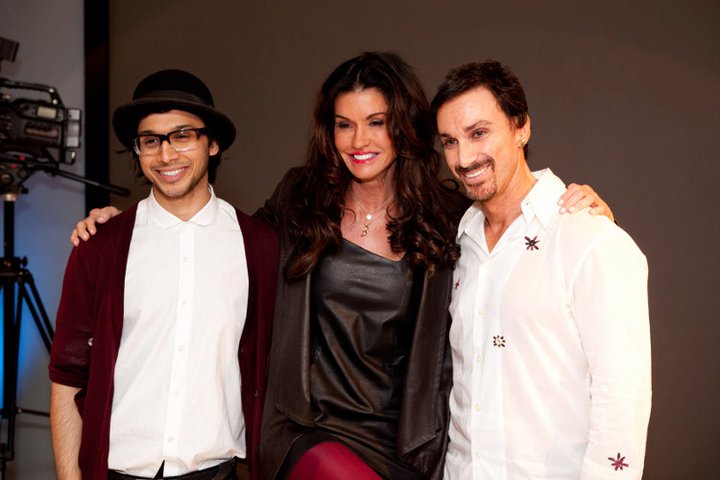 Shahzad, Janice and me, on the catwalk just after the show.

The show was very good, in fact it was one of the most professional fashion shows that I’ve seen in many years. well done to Katch PR, the Button club and of course the designers make-up artist’s and the Stuart Phillips team.

Now it was time to mingle at the after party! Bellow is the link from London Fashion Week, with Janice Dickinson having her hair styled by me.