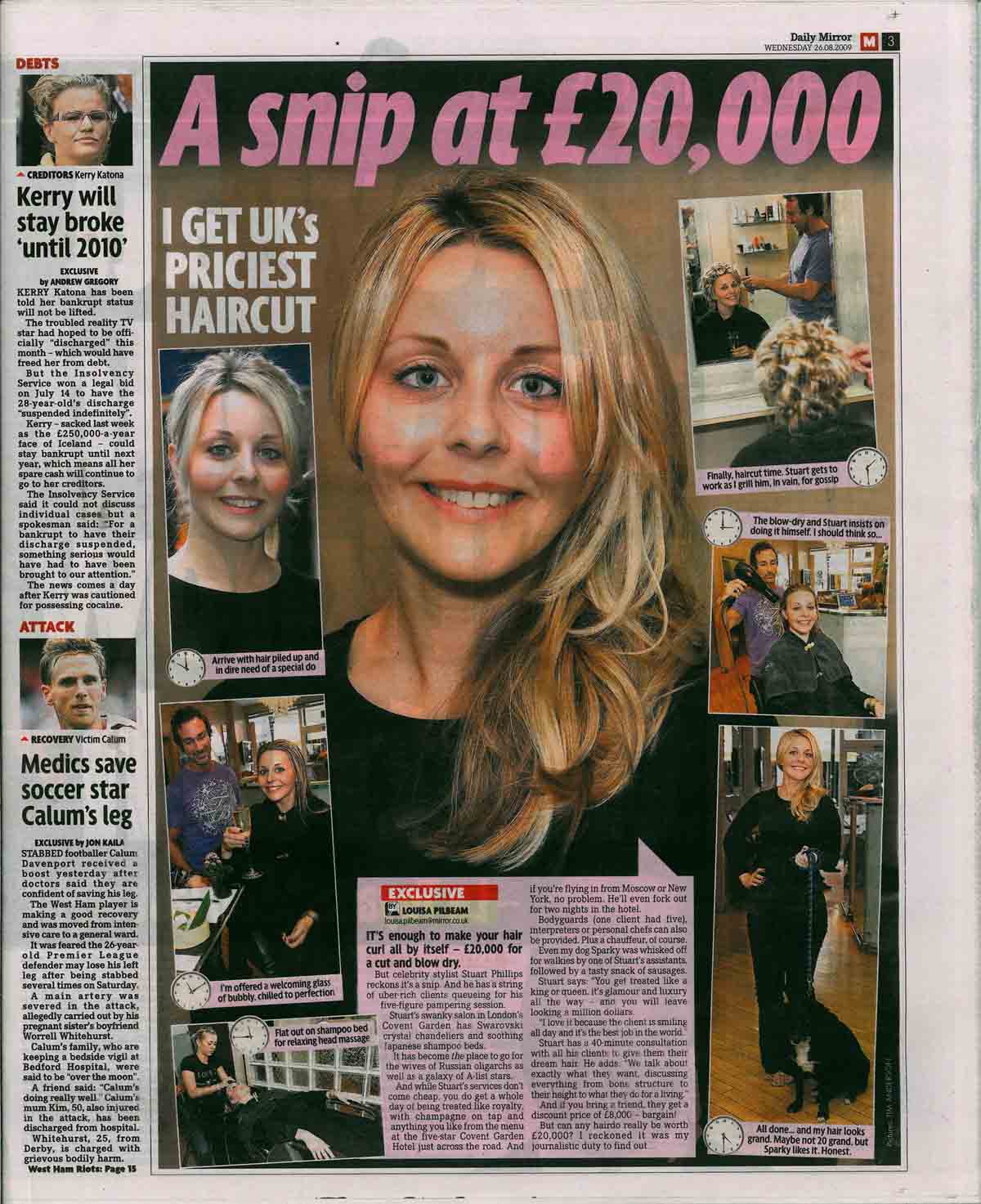 This week has to be the best PR ever. About 18 months ago I had a vision of getting into the record books by creating a haircut for the astronomical amount of £8000, (don’t ask why £8000, I have no idea) the record at that point was £1000 held by fellow hairdresser Lee Stafford, I wanted to smash his record.

In October 2007 I managed to get myself into the Guinness book of world records for charging £8000, “think I smashed his record” this included; a limousine pick-up from the airport to my salon, a champagne lunch or dinner depending on when they land, a gift bag full of hair products chosen by myself for the correct hair type, I will be on hand all day for the client in-case of flight delays, a 20 minute head & scalp massage and of course the all important cut & blow-dry.

The Daily Mail and an adjudicator from the Guinness book of records were present to witness everything.

A few months later I was thinking how I could up the ante and do something even more elaborate, so I came up with a VIP package for the super rich, this would include all of the above + the aeroplane flight over, a limousine pick up from their home to the airport, a driver will be on hand all day for them, two nights’ accommodation in a 5 star hotel, for their champagne lunch the chef will cook anything they like even if it isn’t in the menu, a neck and back massage, flowing champagne, a bodyguard and interpreter if required and canapés in the salon, all this for the small price of £20000.00, yes you heard right and no I didn’t leave on one too many zeros. If a client didn’t want all the services provided they would still be charged £20000.00.

When I showed my idea to a few friends they told me that I’m nuts and could never pull it off, did I listen, absolutely not, I asked my agents at the time to try and sell this story as a feature in Russian Vogue and they managed to do that, I was quite impressed, I also placed the package on my website.
Within a few months of this appearing in Vogue I received a few phone calls regarding the package and managed to book a couple of them in, It proved to be very difficult as it took many weeks of preparation, but a good challenge.

I was at a party about six months ago and met this guy called Justin, I was introduced to him by one of my friends, Justin is a journalist in fact a brilliant one and he told me that he could get the story of the £20000.00 haircut into the Mail, so he wrote the article for me and with-in a few months he said he thinks he will be able to get the article in on Monday 24th August 09.

I was so excited and the night before I was styling the hair for a new girl band (their video shoot) called Candy Rock (which I’ll talk more about next time) at 11pm I was still there working away and I received a call from Justin, he said that you’re not going to believe this but it was about to go to press and it got pulled an hour before because the king of Brunei’s hairdresser flew out to him and got paid £15000.00, so they decided to ditch my story and run with the other one, I was devastated, what are the chances that another story so similar to mine would come out one hour before.
Justin said not to worry I think I’ll be able to get your story in the next day, I said to Justin I don’t think that’s possible he replied it will be a shorter story but I’ll stay up all night if I have to writing it. 12.30am Tuesday morning Justin texted me and said we’re in, I couldn’t believe it, he delivered big time, I LOVE THAT GUY, well not literally.

It’s not that I’m moaning but the Mail’s write-up was 250 words without any images, Justin felt that this would give another paper the chance to do something really big, low and behold Tuesday afternoon The Daily Mirror phoned me and they organised a photographer and journalist to come to the salon, they came at 3pm as that was the only space I had left, they were their until 6pm.

At 8pm I received a call from the Mirror journalist she not only told me that that I was getting a full page on Wednesday but also that it was going to be on page 3, MUSIC TO MY EARS THAT WAS.

That evening I could hardly sleep (do you blame me), I got to the newsagent by 8am and tried to buy their entire stock, the write-up was fantastic.
Since then I have been interviewed by the London paper, Marie Clare, I’ve had nine radio interviews and three TV production companies approached me.

Next time I’ll talk about the TV opportunities, love to share it with you now but will make this blog a tad too long, so afraid you have to wait folks.